Owing to the last night’s merriment it was a distinctly hungover guest who greeted Quang at the guesthouse. Quite how he’d managed to escape from all of the toasting I don’t know, but he was far chirpier than me in any case.

Luckily his local knowledge sprang to the fore again, sourcing an epic egg/chilli baguette from the place just up the road. This really was excellent work, you don’t expect Western hangover food on the fly like that.

First stop was the beautiful Lak Lake, situated in a local tribal area. 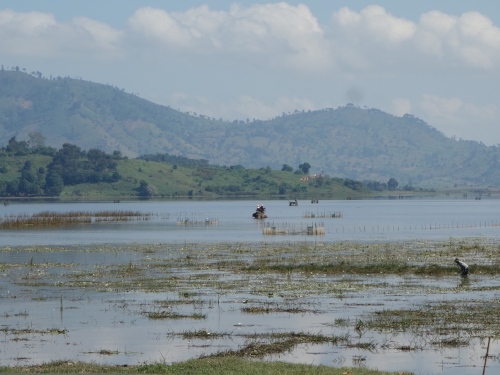 A fantastic peaceful place and with a real focus on bringing sustainable tourism in, to benefit the local people- Lots of homestays and local enterprise. And indeed elephants! I couldn’t really say no to an elephant ride as it’s something I hadn’t done before, so I paid the man and climbed the scary scaffold…

It takes a bit of getting used to, the seat, like everything else here, isn’t really designed for tall people but I found a way to wedge myself in and keep steady as Nellie swayed down the road.

After a while the slight terror subsided and it was a lovely relaxing walk through the village and then, bizarrely, THROUGH the lake. Whilst this seemed a bit odd at first, actually the mahout clearly knew a relatively shallow route and the elephant gently sloshed us through the water. So gently in fact it felt like she was swimming. Once into the lake proper it was an incredibly calm relaxing experience, nothing to hear other than the gentle lapping of the water. I’d thoroughly recommend it, but check your lake first and always go with a guide.

An hour later we were back on dry land, and Nellie left us to go and do elephant stuff, presumably.

And then it was back on the bike for what turned out to be another long day. I’ve made frequent references to my lumbar region (Alright, arse mainly!) and by this point, Day 6, I was really feeling it. As we climbed into the mountains the scenery definitely got more interesting, however the quality of the roads diminished massively. When I spotted bumpy sections it was fine, I’d just hold onto the seat and hunker down, but the surprise ones were the worst… Ouch. Quang very considerately stopped frequently to allow “decompression”…

We then visited a friend of Quang’s at his smallholding. He and his large young family (5 children!) live in the middle of a coffee plantation with a literal menagerie of animals and all sorts of crops, as well as a rice wine still. Very enterprising family who seemed to be doing alright on their numerous different products!

We also passed a community of fishermen who live full-time on the water. I didn’t really get it, but it’s mainly due to tradition, although living on pontoons a few metres from perfectly serviceable farmland sounds bonkers to me! Just get in your boats and fish…

I’ll never make a career as a Michael Palin style travel reporter. “What, you eat with chopsticks? WHY? Forks are better!’ Moving on, we made a lunch stop at a popular cafe at the top of the mountain range, and met probably our biggest gathering yet of Easy Riders. 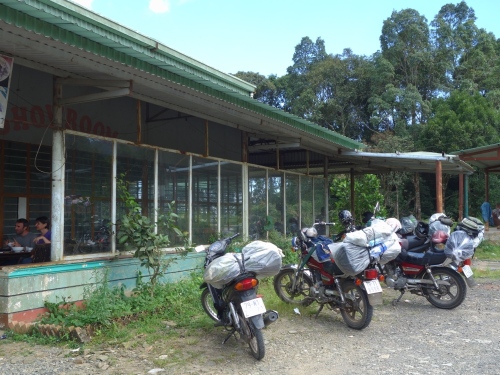 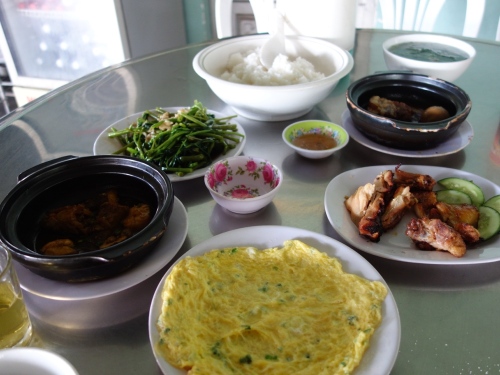 Lunch was not amazing, but not terrible… Quang definitely picked the best of the menu. Through my time in Vietnam I’ve really come to despise these pork ribs which from a distance look like lovely meaty chunks but are actually completely pointless and about 90% bone.

After lunch we paid a visit to a silk factory. Now, I’d like to clear something up. The Easy Riders sample itinerary is full of visits to places that make stuff. Before I left I cynically thought that they’d be the kind of ‘factory tours’ I’ve endured before- Basically no tour just loads of hard sell. These were, without exception, quite the opposite. Most had shops but there was no selling whatsoever, and good explanations of what was going on. (And I didn’t fancy buying any bricks anyway). We followed the process from worm to garment…

The worms are fed on the leaves you can see in the above picture, until they start to spin a web of silk around themselves. From here it gets a bit cruel. As when they have completed their lovely warm sleeping bag they are dunked into hot water to kill them and the silk is then placed onto spools and unthreaded… Poor little worms!

And then it was onwards through the hills once more. We ended up at a coffee plantation which roasts and sells lots of its own products, including weasel coffee, produced when weasels eat coffee beans and then excrete them. It’s kind of like a low-rent Kopi Luwak. I was going to try a cup but after staring into the sad, sad eyes of the on-site weasel (One of many, most of his mates were asleep) I just couldn’t do it!


i took the opportunity whilst enjoying a great cup of non-weasel coffee to pop Sarah a quick message expressing how pleasant it was to be enjoying a coffee overlooking such beauty in 30 degree heat. She was feeling somewhat cold in Korea…

So, with the day’s riding done and dusted we headed into Dalat, the HQ of Easy Riders and the spiritual home, it would seem, of every biker going. It was quite a shock to the system to be back into heavy city traffic again. Quang dropped me off at the Easy Rider s ‘basecamp’, the Hangout Cafe in Dalat, and I learnt that I was staying in the upstairs PX Hotel.

To be honest I wasn’t remotely impressed with this place. Not least because of the resident cockroaches. I was fairly philosophical after having spotted the first one, however when I saw the second emerging from my walking boot I got very annoyed and entered total annihilation mode of both offenders.

That was not a calm night’s sleep. Dinner from a local traveller place recommended by Lonely Planet was ace though. Less than £3 for a 3 course set meal and a beer. Slightly spoiled by a very loud Elevenerife Australian woman at the next table who prefaced quite literally every sentence in her conversation/monologue with the word “I”. Annoying, eh?


I spent the whole night itching, and trying to work out where the one cockroach I hadn’t managed to get was hiding…