As regular followers of me on here will realise, I’ve been travelling now for over 7 months. The most first world of any first world problem you might conjure in your head, and I feel I’m suffering from it: Landscape fatigue. Yep, I’ve seen so many amazing places over the trip that it all seems to blend into one great, scenically perfect smorgasbord.

Attempting to buck the trend, I headed up from the amazing Torres del Paine to the sight which would apparently completely reset my sense of wonder- The Perito Moreno glacier. You reach it via the Argentine town of El Calafate.

Puerto Natales to El Calafate is a pretty easy journey, apart from the interminable queue at the border crossing back into Argentina. 5 hours down, and we rolled into the bus station at El Calafate bang on time. Since I was arriving at midnight, I’d pre-booked a hostel, which was predictably soulless and the ‘welcome’ from the staff member quite remarkable in its disinterest, even on a continent where customer service often comes somewhere in the dictionary between shit and syphillis. Hotel Punta Norte- Don’t go there!

I wasn’t particularly bothered. 2 nights- Just enough to see the glacier and to get the hell out of Dodge. People who say they like El Calafate are either lying or wrong, it’s a tourist hole. Enthusiastically overpriced food everywhere, Swiss chalet (badly) themed buildings and, on the week I was there, a music festival meaning it was full of drunken feckwits…

Anyhoo, a somewhat disturbed few hours of sleep led to an early morning, in order to catch the 8am bus to the Glacier. After enduring the hilariously Vicky Pollard-style rolled eyes and huff from the receptionist for tearing her away from her phone and fetching me, er, breakfast, I scooted back to the bus station.

Loads of companies run buses up there. You don’t need to book a tour unless you want to walk on the glacier (FAR more expensive), just rock up and buy a ticket. It’s about £15 return, a similar amount for the park entrance ticket, and a very easy experience all round, just make sure you’re back at the bus by 4pm…

The journey up takes around 1 and a half hours, beside the enormous glacial lake. Definitely not a boring trip.


Up to the park gates, pay your money and then you’re let loose, with several miles of boardwalk to view the glacier from. Simply incredible. Apparently the afternoon tours (Leaving El Calafate at 2pm) are even better, as the heat of the sun causes more chunks of the glacier to ‘calve’ from the main body, thundering noisily into the water.

Some of the boardwalk was closed when I was there as the movement of the glacier had come too close! To be fair, when you’ve got millions upon millions of tons of ice which goes where it wants to, albeit rather slowly, it’s worth taking precautions. Despite this, I still had plenty of opportunity to witness the jaw-dropping immensity of the glacier from close quarters.

You can also do a boat trip but the general consensus of opinion was that it wasn’t really worth it, and that you didn’t get substantially closer to the glacier anyway. However, having spoken to a couple of young Americans who’d taken a walking tour actually on the glacier itself that sounded like an awesome thing to do… If you’re there, you may as well do it! 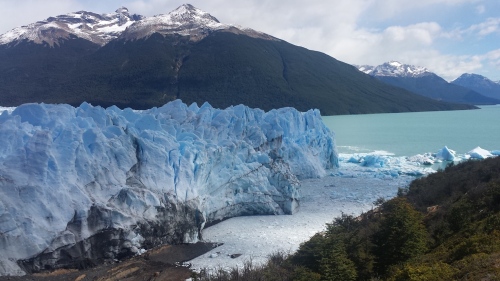 There’s not much more to say about the glacier really. As much as El Calafate is a bit of a one-trick pony town, you really do need to see it, because it’s incredible. The sound of the constant cracking, creaking and occasional immense, roaring splash as tonnes of ice fall to the lake has to be experienced at first hand.

And so, after a coffee at the somewhat overpriced but decent enough restaurant beside the glacier, it was time to hop on the bus back to El Calafate and another night in Bates Motel.

Next blog, I’ll be heading further up the gargantuan Patagonian Icefield and exploring the hills and valleys around El Chalten…