Ah, it was good to back in Buenos Aires again. It takes a while, but when really far-flung places take on a sense of familiarity it’s a good feeling. I’d been back a few days and was at the huge Sunday market on Defensa in San Telmo, hunting for a couple of cheap but presentable t-shirts to avoid spending teaching practices during my looming CELTA course looking like the traveller hobo I really am.

It was whilst I was at said market that I heard the grating sound of the aforementioned phrase. Sat on the sidewalk, sorry pavement, waiting for my friend to emerge from a shop, I looked over to see from where the sound of this bizarre interaction was emanating.

The owner of this particularly grating and strident voice was standing beside a nearby stall, holding some form of art niknak, trying to communicate with the stallholder by what I can only assume passes for normal conversation in his corner of the States.

To her credit, despite the facts that

a) We’re in Argentina. South America. No hablemos Ingles. We try to speak a little Spanish here, even in the big touristy bits like BA where you can generally get away with it.

C) said man was clearly somewhat of an arsehole

She answered him, guiding him in good English to form a few more nouns, verbs and prepositions into something we could all work with… “10 dollars…what?”

Our friend raised the niknak aloft and repeated his pet phrase. “10 DAAAAAALLLLLLAAARS?”

Not to be perturbed, the stallholder replied, “No, that one is 500 Pesos (Er, the actual CURRENCY here…)

“Well, wadzat? AwmuchisthatinDAAAAALLLLLAAAARS?” He replied in a tone of great distaste. To be fair though, I’m the same with small supermarkets here. If that Mom’n’pop provisions store can’t be arsed to instantly convert to my chosen currency, I’m outta there.

“10 DAAAAALLLLLLLAAAARS!” He replied, in a fit of enthusiastic bartering.

Ah bless. At this point my friend from Santa Fe had come out of the store and remarked “It’s not India!”. Quite. People really don’t barter here, at all, and prices tend to be fixed. I imagine our friend from the States worked it out after a few such unedifying communications.

So, back in BA. I’d arrived on the Tuesday night flight from El Calafate, my fifth consecutive entirely trouble-free experience with Aerolineas Argentinas. I think they’ve raised their game in recent years. Booked into a hostel recommended by some folks in El Calafate which turned out to be cheap as chips and really convenient for the airport but an otherwise slightly unedifying experience.

My mission was to find a pad ASAP to stay during my CELTA course, due to start the next Monday. Nothing like a bit of pressure! Thankfully this turned out to be fairly easy, a bit of remote research on Craigslist had turned up a few possibles and I ended up loving the second place I saw, and then moving in the next day after a bit of wailing and gnashing of teeth transferring funds and acquiring US Dollars for the deposit.

And then, the next day, I was sorted. Feet up… AT HOME finally! 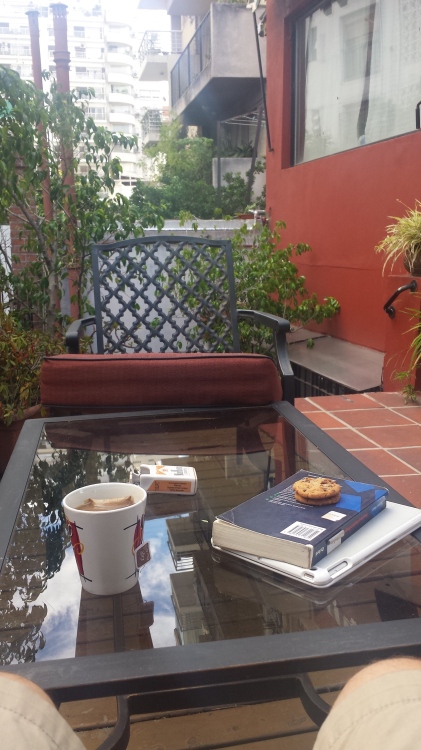 What a nice feeling. Hanging up my rucksack and walking boots after 7 solid months of travelling. Not living out of a pack, and most importantly having my own SPACE. It’ll be a wrench returning to dorms after the lovely, lovely en suite room here with massive bed and smart TV… Time to vegetate.

Buut… Not for long. With only the weekend to relax and prepare, on Monday morning it was time to get back to work. A long-anticipated course which I’d first wanted to do in Asia (But ran out of time) and then tried to do in Jan/Feb (No space!) and now I was going to finally start in March.

CELTA is the Cambridge English overseas teaching qualification. A higher level, and more respected, than the raft of online TEFL courses, it’s the gateway to better-paying ELT jobs abroad, and hopefully a stepping stone to bigger and better things. I must admit that it was with a dose of scepticism that I treated the dire warnings about its intensive nature, prior to starting and during the induction interview. These were, however, absolutely true, it’s one of the hardest month’s work I think I have ever done, possibly including the one on a specialist operation which lost me a girlfriend and earnt me a car in overtime payments (In hindsight a brilliant trade, the car was much more fun).

CELTA is very practical. A core requirement of the course is teaching 8 classes. These start on Day 1- Nothing like being in at the deep end! Luckily the first group we had were upper Intermediate learners, very helpful, communicative and generally a pleasure to teach.

My coursemates were a mixed bunch, Charlotte from the UK having just finished University, Damian from Argentina who had been teaching English for several years but wanted to formalise his skills, and Fran from the US who wanted to learn to teach voluntary classes to poor Spanish-speaking immigrants in Boston. From an early stage it was clear that Fran liked to talk. I mean, REALLY liked to talk. This was going to be fun…

Whilst downtime was a precious commodity during the week, at the weekends I managed to get out and explore the local area a little. From not looking initially very promising, the area in which I was staying in (Belgrano/Palermo) actually turned out to be a mine of great little shops, such as Cafezenda above right down the street, a mom’n’pop-style coffee roasters. Great stuff. 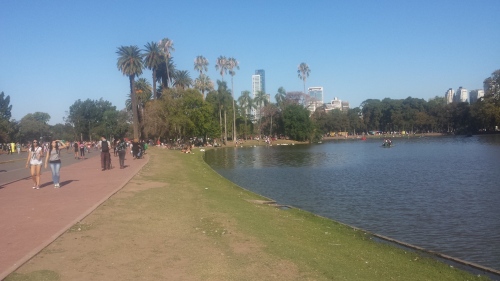 I also made a brave investment early on… A new pair of trainers. Being close to some of BA’s fantastic parks meant that de-stressing was only ever a short run away. On the weekends it seemed like the whole of BA’s population was on the move here, dodging the insane rollerbladers and wobbly children on bikes became a sport in itself. And obviously, no stay in Argentina would be complete without some serious…

My landlady had been most emphatic that I should visit this place. Just around the corner from my house, a completely unmarked store front with a “closed” sign on the door: Secretito, the secret Parrilla restaurant. Utterly mind blowing Ojo de bife (Ribeye steak), great wine and a good atmosphere (and as my Argentine friend put it, an average age of 73). Secretito quickly became my go-to stop for a weekend treat.

My cultural education continued with a visit to Chinatown (Barrio Chino), a thoroughly exciting outing since the supermarkets there had so much stuff that I hadn’t seen in months. There are certainly aspects of Argentine life which confuse me, one of which is the seriously poor availability of vegetables… Even here in BA you’re lucky to find more than 4-5 varieties, and with both high prices and low quality getting your 5-a-day is an expensive proposition! Shouldn’t really be the case with the vast swathes of land available and great climate, however I suspect it’s a tax/tariff thing that makes raising cattle far more lucrative.

Tamara also got her palm read… From what I gather it wasn’t a particularly enlightening experience, but at 20 Pesos (£1) it was cheap enough. I stocked up on coconut milk and curry powder.

And so, the weeks passed. The intensity of the CELTA course never really let up, over the weeks of the course our lesson planning was expected to become more complex and independent, as well as 4 written assignments due in, one every week. During the week I’d rarely get home from the school before 7-8pm, and would then be working until midnight planning. All worth it in the end, I hope.

In week 3 we gained a different class to teach, much more challenging than the first, with lower ability and a few members who simply couldn’t, or didn’t, ever speak…

But, all good things must come to an end. After an extremely nerve-wracking night before my last class, whereby the plan I’d devised really wasn’t detailed enough, and half of it was then lost in a Google Docs maelstrom, and which I thought would never, ever last an hour, it actually all turned out magnificently and it was the best lesson of my course. Done and dusted… 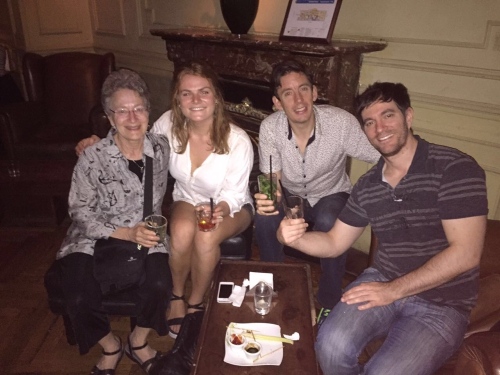 A few drinks at a posh place in Palermo (Milion, Parana y Santa Fe) and then dinner. Thank goodness for that! So, we’d all passed our course. What next for me? Well, another week in my house to decompress and then back on the road. Not before some more sampling of the 3 Ps of Argentine culture though: Protest, Peron and Parrilla.

My penultimate weekend in BA coincided with a huge march commemorating 40 years since the disappearances and horror of the military junta here. Etched on national consciousness, this event drew countless thousands of Argentines to converge on the Central Park in BA. Amazing to see, and completely peaceful with, somewhat understandably, not a cop in sight. Argentina has an uneasy relationship with authority- Even now many of the perpetrators of the worst excesses of the Dirty War have not been brought to justice, and policing enjoys a somewhat distant relationship with the wary population.

This possibly demonstrates one of my favourite aspects of Argentina, the political awareness of the population. The majority of the graffiti everywhere has a message, and people are extremely ready to stand up for causes they believe in. It’s possibly because political decisions here have a real impact, with double-digit inflation a norm and wild price swings caused by Government policies. Right now the incumbent president Mauricio Macri is removing subsidies on power bills, resulting in costs which have doubled or tripled in a week.

So then, a few admin tasks to sort, and I’m getting ready to pack up my stuff again. Hopping on the ferry to Uruguay tomorrow lunchtime, back into the unknown… Eeek

One thought on “Back in BA”