I’d been thinking about it for a while, but tonight was to be the night. Camping on one of Santa Cruz’s best beaches. Free for residents, too… Just need to rock up at the National Park office in town and obtain a permit. Ideal.

So, whilst I’d obtained the permit in lots of time during the week, when it came to Saturday I was in a blind rush to assemble stuff I needed and to get out to Garrapatero before the National Park office closed. Quick, what have I forgotten? Having a moderate hangover from last night’s meal and drinks with some students didn’t help.

Whilst doing so I checked my permit and realised that my friend at the National Park office in town had put the wrong date on… D’Oh! Having tried the office and found it closed I thought I would just try my luck at the beach anyway.

I’d planned to cycle the whole way to the beach but, as time was running out, decided to get a taxi for the first bit to Bellavista as it’s all uphill anyway and not terribly scenic. Luckily there were 3 other guys at the bus stop waiting for a lift so it was only $1 each…

It was a particularly lovely, yet hot, day for a bike ride. Clear as a bell, and from the top of the highlands I could see right over the bay. There aren’t many days like that in the current season! I arrived well ahead of the cutoff time at the National Park hut. And into Problem 1: The ranger noticing my completely wrong permit date. Luckily though he was a really nice guy whom I’d chatted to on our previous visit and he changed it. Phew. Another win for my developing Spanish.

Sadly my dreams of a Castaway-style private beach were in vain, as I found that an Ecuadorian family were also camping there that night. Luckily though there’s loads of room, and I found myself a prime spot right on the beach.

My new tent, thankfully muled from England by my mum, seemed to be reasonable quality. Sure, it was cheap and you could tell, but everything worked and I more-or-less fitted inside pretty snugly. With my rucksack as a pillow simply because there was no other place for it. Having set up camp I relaxed for a bit on the beach and then started to sort out a fire for dinner. Plenty of firewood around and, whilst I’d brought charcoal there was still plenty left in the hearth. My Bear Grylls-esque skills didn’t disappoint as I had an impressive fire going on first attempt. Pah, how hard can this Castaway lark be?

Fire suitably established, I then reviewed my choice of pitch. Hurricane Katrina-strength winds were starting to build up and my tent didn’t seem to be enjoying it. Discretion being the better part of valour, whilst I still had daylight I moved it into a sheltered spot beneath the mangrove and manzanilla trees, properly cosy!

This was definitely a good move, as the wind continued to build all evening. It definitely wouldn’t have been a warm place to camp out there. Scenic though… To be fair my new campsite was approximately 20 strides from the beach anyway. Time for some self-indulgent Castaway style selfies before dinner. WILSOOOOOON! 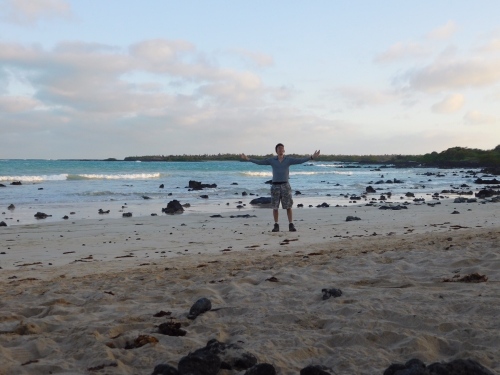 I’d pre-prepared some salad but the main dish was a slab of tuna from market this morning. I hadn’t quite banked on there being no grills on the barbecues but it cooked pretty well amongst the hot coals anyway. Barbecued fresh tuna with a maracuya and soy marinade… Yum

Darkness falls pretty uniformly around 6.30-7pm here on the Equator. I had to string out the evening slightly but after 8pm gave up. In the wilderness nobody calls you sad for heading to bed mega early! However, first I had to investigate the source of that weird rustling noise in the bushes…

Hermit crabs, to be precise. Bloody loads of them! Once I’d established that they don’t really have any pinching capabilities I was slightly more relaxed and just started to observe them. Trying to get photos by the light of the headtorch was a challenge which I didn’t really meet. Fascinating little creatures though. The tent zips were checked slightly more thoroughly when I got back in.

Given the calming sound of the sea and my comfy cocoon, I slept for an incredible 12hrs solid. Island life may be many things, but living in Puerto Ayora at least, it isn’t peaceful. Drifting off to sleep to the sound of the sea was a lovely change to the car horns, random whistlers and barking cacophony of dogs in town.

Waking up on a deserted beach? Even better. Pretty amazing. Since I had time I spent an hour just dawdling around the rock pools, exploring the other side of the beach yet unexplored, and naturally talking to my many feathered companions. 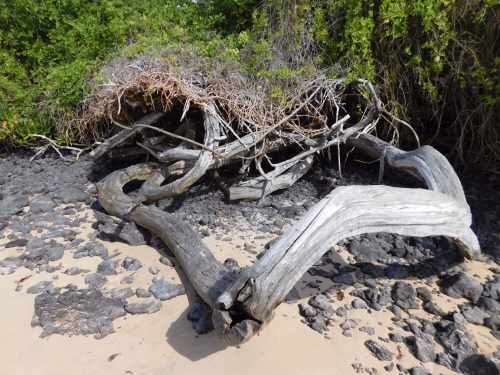 Sadly my rapid packing hadn’t extended to hot water or coffee provisions, so it was time to head back to the Big Smoke. Loading up my bike again I said goodbye to the kayak hire guy, and set out on the depressingly uphill section back to El Cascajo. 7.2km according to the signs, and in the growing mid-morning heat I certainly felt it. My bike was protesting at the large amounts of extra kit on it, with the rear wheel rubbing perilously on the frame as soon as I applied any pressure to the pedals. Please keep going until home, it’s a long walk…

After a supplies mission in Bellavista (Empanadas and cake for the win) I was back home in an hour and a half, a good time considering the uphill schlep from the beach.

It’s definitely somewhere I need to get back to before the end of my stint on the islands, what an incredible place… Thanks Parque Nacional Galápagos. Again…

4 thoughts on “A Night on Garrapatero”