I’m rapidly approaching the end of my time here in Galapagos. I seem to have managed to slip into a relatively cheap lifestyle, reasoning that I really don’t need to pay 3 bucks for an awful beer except on special occasions, and that that second Magnum of the day probably isn’t a necessity for either body or wallet.

As a result I’ve had a bit of spare cash. Some I’ve transferred back to the UK, and I’m definitely saving some for my upcoming travels back home (The plummeting USD/GBP rate somewhat of a catalyst… Fuck you Brexit!), but I did nevertheless decide to splurge on a day trip to Bartolome.

Lisa had done this trip with her parents and thoroughly recommended it- It’s generally one of the pricier day trips from Santa Cruz as it’s a long way to travel, right to the northern tip of the archipelagos, however she managed to get an amazing deal precipitated by low season discounts and a “mates’ rate” via our school coordinator. So, I followed suit.

Picked up by a bus on the main road, we made our way to the Itabaca Channel, from where you’d normally get a ferry to the airport but where we transferred to a RIB for the short hop to our home for the day, the Promesa. What a beautiful boat- Rigged out for deep sea fishing she’s the kind of vessel you imagine the excessively rich pottering about Florida Keys fishing holes in.

And so, with little further ado we got underway towards Isla Santiago. It’s a loooong trip, the bus to the Itabaca Canal takes the best part of an hour and then it’s a good 2.5hrs steaming out to the islands itself, a more leisurely journey than the inter-island speedboats however allowing a good amount of relaxation and sunbathing on the aft deck. Perfecto.


En route I got to check out some of the creature comforts of the vessel, including airy cabins up the front and an air conditioned lounge. Very comfy, although having heard about the price of some of the charter fishing trips I would hope so! Coffee and biscuits on the go throughout the morning. Good elderly bonus, I do like a bit of free munch.

Isla Santiago is one of the more protected corners of the archipelago due to its diverse ecosystem, and as such tours are only permitted to stay on the island for one hour. This was plenty of time to explore the foreshore and to enjoy the incredibly clear waters for snorkelling, but sadly not enough to follow the trail into the centre of the island, tantalisingly close. In Galapagos terms, the island has some extremely new landmass, the area around the landing beach having been formed less than 200yrs ago from volcanic activity and the viscous outline of the poured lava being more apparent than anywhere else I’ve seen.

A rare sight on the islands, as we were coming in with the panga we saw a couple of penguins… Sadly the little buggers seemed to enjoy evading tourist cameras as I didn’t manage to get anywhere near them with lense or snorkel each time they came into shore. This was the best shot I grabbed.

Landing at the beach, I was somewhat afluster trying to decide on the best use of our hour. I decided to take a quick hop over to the lava field to check it out. If you knew about this stuff, I imagine the geology of this island would be fascinating. Even as a lay observer it was clear how unique and ‘new’ a landscape this was, the bubbles and scars of recent volcanic activity very apparent. 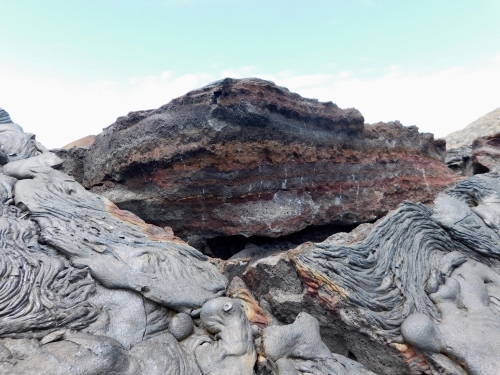 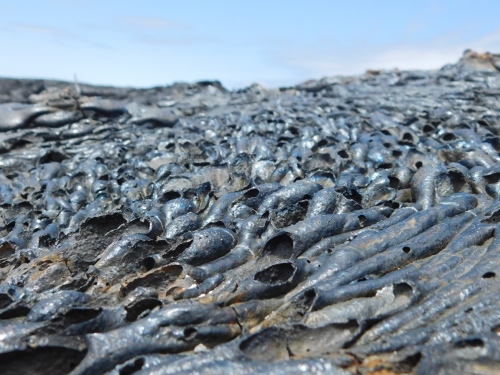 As with all of Galapagos however, even on the most apparently barren slice of rock life still managed to spring forth, with a new kind of lava lizard I hadn’t seen before and some funky (and huge) crickets. 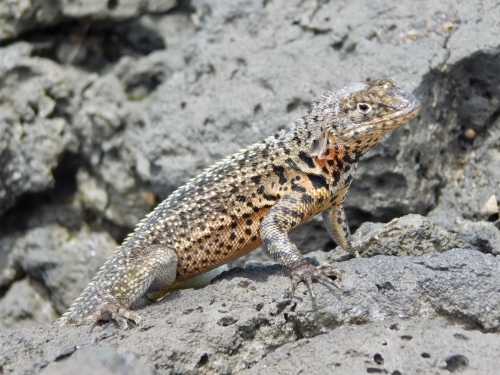 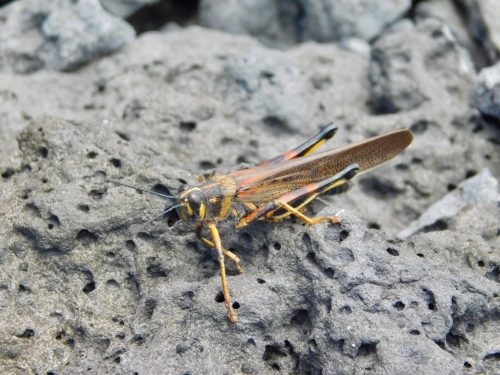 Back to the pristine beach, and time to hit the water. I was surprised to find that it was marginally warmer than other recent swims, although still not exactly balmy. We are still in the path of a strong Humboldt current bringing colder waters up from Antartica. The water was by far the clearest I’ve ever seen here, and the number and variety of fish was staggering. 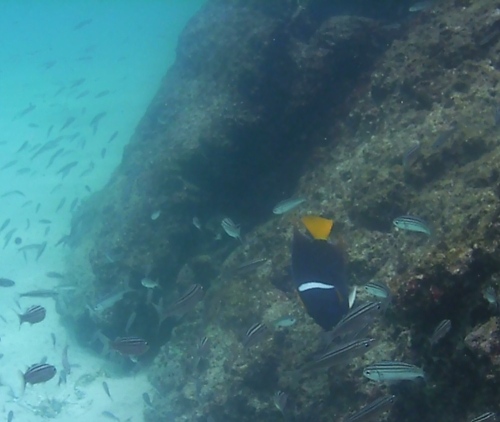 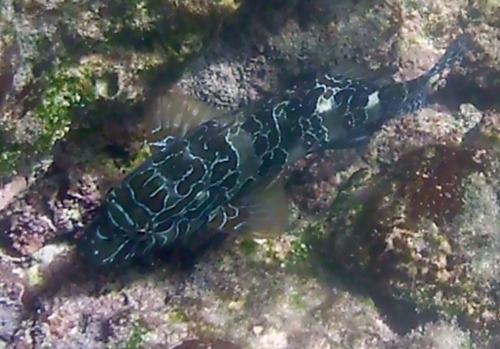 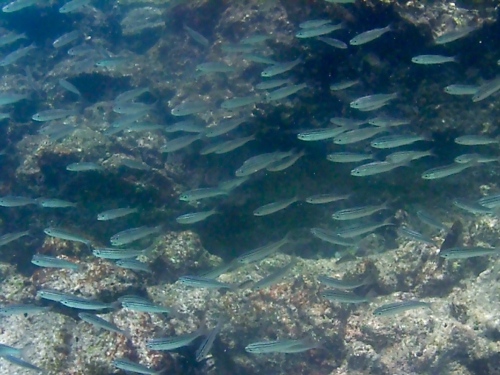 I was desperate to catch some shots of the penguin pair swimming, however sadly they were always just that bit too far to reach. And then, before long but all too soon, it was time to head back to the boat. Consolation came in the form of lunch however!

Lunch finished, we set back off into the channel for the relatively short hop to Bartolome.


Once you land via panga at the small dock on Bartolome, you set off up the boardwalk into what feels like an arid moonscape. It wasn’t the hottest of days but the combination of sun above and wall-to-wall hot rock underneath soon made us feel like we were being cooked alive. You’d think that nothing could possibly survive or thrive here, but on the evidence of our little friend here, it’d seem that you are wrong. 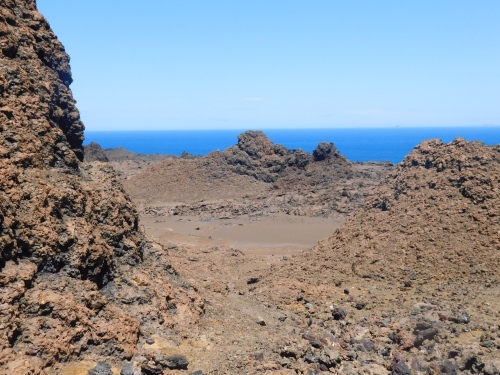 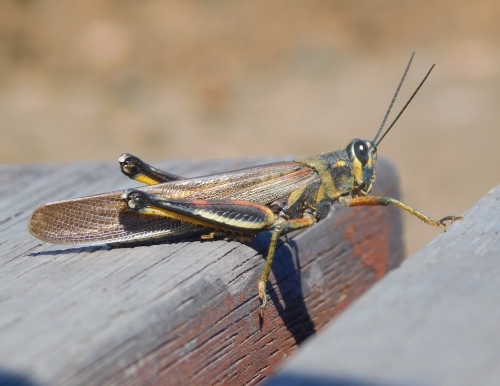 Up we climbed along the boardwalk, with the addition of a blistering wind to add to the arid heat. None of my photos managed to escape entirely unaffected whilst I tried to hold down a combination of hair/sunglasses/camera from blowing into the great unknown.


So then, with the sun continuing to desiccate us slowly, it was time to return to the dock and set off again into the blue. Obviously saying hello to the island’s resident iguana en route. 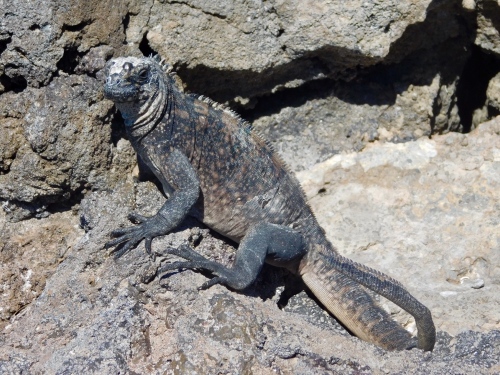 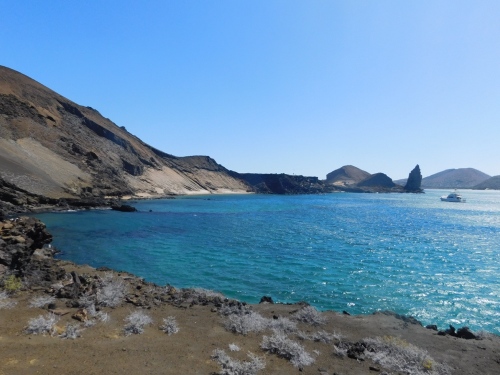 Then, just 2 and a half hours back to Santa Cruz… Unfortunately the tide had very much turned against us by this point and it was not the most comfortable of rides. Well, a slight understatement really as for the first 30-40mins of the journey half the boat was trying to fall over/fall out including the very substantial dining table inside the saloon and the flat screen TV!

But, after the sea crossing and the hour bus back to Puerto Ayora we’d made it. Home, slightly nauseous, thoroughly windburnt but happy. My prediction for the evening’s activity came spookily true since none of my housemates had managed to organise anything whatsoever towards the planned barbecue. “I thought you were doing it”? Oh FFS. Beers in the town it is…

6 hours travel… 2 hours activity. Was it worth it? Absolutely yes! Most of the time of the boat except for the rough bits can be spent relaxing, reading and taking in the sun (Always a good pastime) and these two islands really are pretty special. I booked my tour through Galapagos Eden agency on Calle Baltra in Puerto Ayora, on the Promesa. Fares range from between $150-$220 for the day including everything except wetsuits (You don’t need them anyway), prices depend on availability and seasonal variations.