*and it’s a big asterisk. Back in the 80’s and 90’s, under the grip of Pablo Escobar’s drug empire, Medellin was indeed one of the world’s most dangerous cities for murder, kidnapping and other such goings on, but there’s been a massive transformation in the intervening few years. Medellin is Colombia’s second city and has a reputation as one of the most liveable cities in the world now.

My trip from Salento was at least trouble-free. Finding a completely direct bus service was a big win, and to be fair the VW Crafter minibus was a seriously comfortable ride. However the route was anything but. From the map I assumed that we’d just be heading up the wide valley between the central cordilleras however further inspection reveals that to get from Salento north requires the surmounting of a massive hill or two, and as such the road is a windy, single lane nightmare. Bouncing off the sides of the seat every few minutes does tend to exacerbate travel sickness.

But, arrive we did, well ahead of the projected 6hrs. I’d elected to stay in El Poblado, the main ‘tourist’ area of the city, and this was only a very short taxi ride from the Terminal Del Sur. Happy days! Further to that the Irish couple who’d stayed in the same guesthouse as me and shared the ride to Medellin also were happy to share a taxi. 1/3 price, ace.

Poblado Park Hostel was not a bad place by any stretch of the imagination, it was exactly as I’d expected it to be, and exactly why I was only staying the night in Medellin. Full of utter cockwombles. There’s something poisonous about ‘cool’ cities as they attract ‘cool’ backpackers who, by and large, tend to be dicks. But hey.

Saturday night, so I headed out in search of beer, food and companionship. Sadly I only really managed the first. The area around Poblado Park is stacked with bars and restaurants, a great place to head out for the evening and quite similar to parts of Buenos Aires, my old temporary home.

After a couple of beers I decided, as much as it made me feel dirty and ashamed, to go into an Irish pub. Yes, I know. Luckily as I got to the door I was deterred by the faintly ridiculous ‘cover charge’ to go in. To an empty Irish pub. Er, no. I made my way back to the hostel for a relatively early night. Yeah, I know, Saturday night in a party city. Sa-a-a-d.

This did have the advantage of giving me a full, un-fuzzy next day for sightseeing purposes. So, I headed straight out onto the main street and towards the centre. Like Quito and BA, Sundays are cycling days, and this main artery was closed to cars, which made for a nice relaxed stroll.

One of the first things you notice about Medellin is the street art. There is a LOT of it, and it’s by and large really good. The second is the well-designed liveability of the city, one of the first here with bilingual street signs and also lots of thoughtful city planning, like the numerous parks:

My first stop was the MAMM, Museum of Modern Art. Well, FIRST stop was actually their trendy cafe for a breakfast treat. Eggs Benedict. Not something I imagined myself eating in Colombia.

Sure, it’s not the MOST interesting modern art museum I’ve ever seen, but entrance is reasonable at 10500COP and they do have some innovative exhibits, but as others have commented it all feels a bit sparse…

After MAMM I headed down further towards the centre to one of Medellin’s many Centro Commercials (Shopping centres). People look at me like I’m a bit simple for saying this, but after so long out in the wilds I do find large shopping centres and supermarkets vaguely exciting. BRIGHT LIGHTS CONSUMERISM!

Medellin benefits from a seriously good metro system which has clearly cost someone a lot of money. This includes cable cars up to a nature reserve, although infuriatingly these were out of action on my one day in Medellin. However, what the Metro was able to do was to whisk me along to my next stop in cooled comfort.

Parque Botero is an open space in Medellin dedicated to the works of one of its most famous sons, Fernando Botero, born in the city in 1932 and whose trademark style graces numerous bronze sculptures within the park. In fact, the adjacent museum also features his art in bucketloads, generously donated by the artist over the past 30+ years. I love them, there’s something very human and warm about the chunky caricature which forms his signature style. 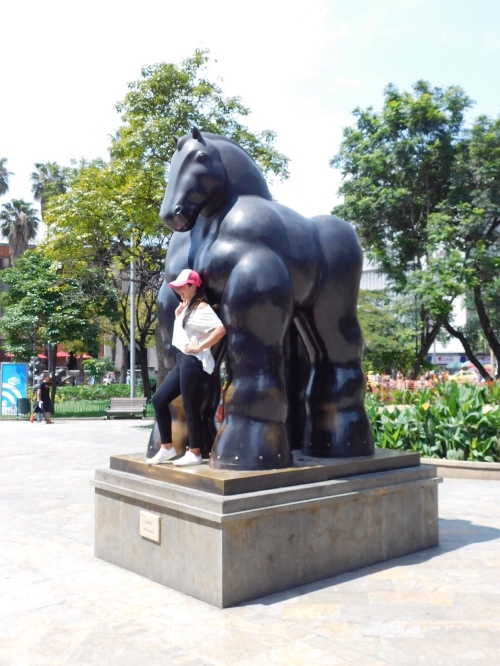 Parque Botero itself is a beautiful space, bordered on one side by the Metro and on the other the museum. It’s not an entirely hassle-free place due to the sunglass and hat vendors, but they are friendly enough and definitely not as persistent as, for instance, Gambian beach looky looky men!

A quick tactical lunch at a standard ‘meat and beans’ restaurant nearby and then an amazingly well timed entrance to the museum, just as the heavens opened. There’s a definite pattern to the rainfall here: Dry mornings and then an utter deluge any time from 3pm onwards. Glad I was inside Botero’s world instead. 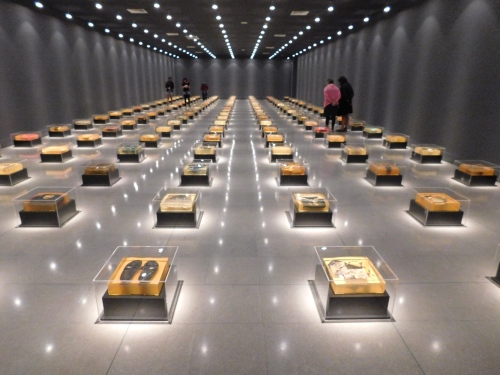 Rain abated, and it was pretty much the end of my short time in Medellin. It’s definitely a city I would like to explore more of, high praise coming from someone who really doesn’t like cities. Sure, it’s definitely got its problems as evidenced by the number of hustling homeless guys around, but overall it seems like a great, liveable city with a lively social scene and plenty of culture.

I think the key to doing Medellin is to avoid hostels if possible, I know of a few people who found really good deals on AirBNB and by doing so you get to avoid the hordes of trendy children who think they are insanely cool for being in South America and ingesting cocaine. Just a tip. If anyone has tips for good hostels without the aforementioned clientele, feel free to send them in.

Just time to get myself to the airport. It’s a good 40km from the city so taxis are expensive. You need to take a city cab to the San Diego mall on the outskirts (Only 7000COP from El Poblado) and then pick up either a bus or a colectivo. These are the white saloon cars which park up outside McDonalds but don’t worry, eager fluffers will hustle you towards them in return for a tip. A colectivo to the airport is 13,000COP per passenger and a good compromise between price and speed.

Next stop Santa Marta and Parque Nacional Natural Tayrona. I’d planned to spend an extra day in Medellin but when the evening flight came to about $25 including baggage on VivaColombia it was time to alter plans…