So, the morning after the night before. It’s fair to say that I had felt better. Seizing the opportunity during the eye of the gastrointestinal storm, we summoned a colectivo to the hostel to get us up to Minca. This is a great service- It’s the normal price for the bus there (8000COP) but it comes right up to the hostel to pick you up. Now that’s service.

Yep, this was today’s mode of transport, and we were in the back. Which would, under normal circumstances, be fine. Not when you’re trying to hold onto a dodgy stomach though. The 45 minutes winding and lurching up the Minca road were absolute torture, particularly facing backwards and then, to add insult to injury, being drenched by rainwater coming through the front flap of the canvas.

Sure enough, by the time I came to leave the truck I was somewhat green. I leapt from the back and headed to the side of the road and pretty comprehensively emptied my stomach, Exorcist projectile vomiting style. An equal and opposite urge then overtook me so I speed-waddled to the Minca Cafe. Tieneunbanoporfavor? and no doubt a look of extreme terror caused them to rapidly direct/shuffle me through the kitchen to a large bathroom separated only by a curtain and then, as I saw mid-descent onto the pan, an open door the other side. No time to shut it now. Please nobody come in…

Suitably downloaded we set about trying to find Mar y Monte hostel which, as it turned out, was pretty close. Set on an open hillside you’d struggle to better the position. It’s run by Juan and a team of volunteers, really friendly and with a nice vibe. Maaan. 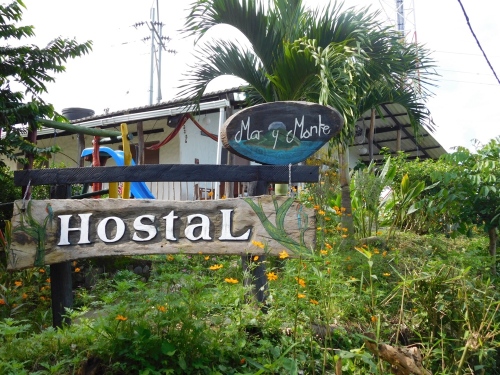 A really lovely garden out the back, and also most importantly a resident cat, which probably didn’t enjoy cuddles, but received lots of them nonetheless. And on our first evening there, a visitor- A toucan completely randomly appeared, sat around for a while to provide the photo opportunity and then left. What a handsome chap! 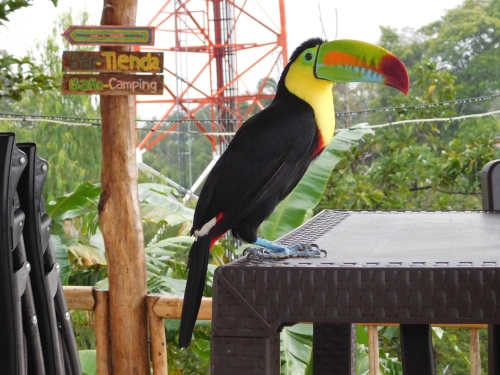 After most of the afternoon spent in bed, I was at least starting to regain some semblance of digestive control, and therefore the next day decided to attempt the walk to the Pozo Azul, a waterfall a few kilometres outside town, the next afternoon. Unfortunately the weather gods were not with me, as during said walk the heavens opened and upon reaching the waterfall it had become the Pozo Marron (brown). Not a tempting prospect swimming-wise.

Walking back down from the distinctly underwhelming waterfall, I saw a small sign to nature reserve “Faunal” and deemed it worthy of a quick visit, since the rain had slowed down and I was determined to reclaim some fun from the day. It’s a funny little place, with a family running it and with various small nature trails set up. We plumped for the “Toucan loop”. 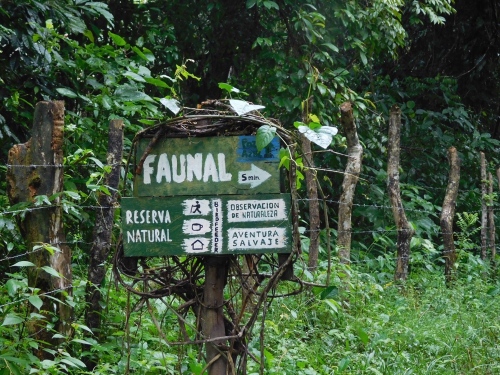 Sadly no toucans, and the path ended up being waaaay more challenging than expected due to the abundant greenery and slippery roots everywhere. At least the more obliging local birds (and winged insects) stayed still for some photography opportunities. 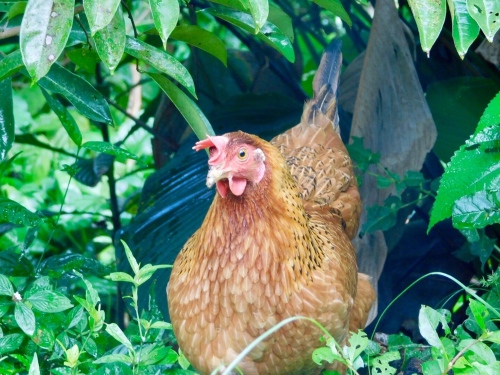 So the day wasn’t a complete washout. Evening came and a group of us from the hostel headed to the Black Cat restaurant in town for nosh. Well-regarded and with a range of international food, hopes were high. The food was great but, at times, the service was just a bit odd, with huge waits for things like the bill and then comical mistakes on the order like bringing me and another of the guys a cheesecake to share, with two spoons. And to top it off, the very Colombian retention of the change until we asked for it. This really winds me up the more I see it. Especially since a 10% service charge had already been added!

No time for complaints, it was time for bed as we were due to start a bird tour the next morning at the somewhat ungodly hour of 0600 with the famous Jungle Joe. 3hrs, 25,000COP. During this tour I found out that I definitely am not cut out for birdwatching. 3 hours of it is intense, particularly when half the time I couldn’t see the bloody things in the trees. I soon got used to just lying about seeing the yellow-tipped warbler wren or whatever they called it after a few occasions when the other twitchers determinedly ‘helped’ me find stuff!

To be fair, we did get some great spots. Loads of small birds I instantly forgot the names of, but also a rare Pygmy owl and a pair of toucans. And lots of hummingbirds. Yawn, so common! The pygmy owl in particular was TINY so Jungle Joe had to take the picture for me. 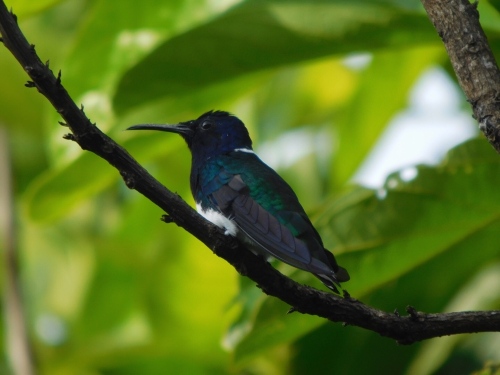 Birds…watched. Time for a revitalising breakfast at Cafe Minca, one of the best coffee stops in town. After breakfast we set off for a different kind of intense activity- Moto taxi riding. I badly wanted to visit Casa de los Elementos before I left Minca, it’s a hostel that gets rave reviews due to its incredible location far above Minca, and associated incredible views. You can walk, but it takes 2.5hrs, so most people put their lives in the hands of a mototaxista who, for 20,000COP, will take you on the 45 minute journey up there, pillion.

No photos, but rest assured that it’s every bit as intense as it sounds. It isn’t a road, more a muddy, rutted track with huge gullies and rocks all over the place. My rider wouldn’t be any good at motocross, with the amount of footdabs that he gave out. It was…fun.

The position of Casa de Elementos is, quite simply, spectacular. Perched high above the valley, with a swing and a giant hammock to relax upon. There’s a lively bar with, most excitingly, DRAUGHT BEER from a local craft brewery. This is amazing! As a day visitor there’s a 10,000COP entrance fee although to be fair this isn’t bad since you also receive a free beer.

Amusingly, as I walked into the hostel the Dalmatian above followed me, and everyone complimented me on ‘my’ dog. Er, what dog? Oh, that one. The exuberantly filthy collie cross was already there. When we later went back to the Black Cat that evening both dogs wandered into the restaurant. They don’t live there, it’s just one of their visits. The staff said that they generally do a couple of trips up to Casa Elemento with tourists every day! Ahh, self-walking dogs.

Kevin had to depart around 1pm in order to return to Santa Marta via moto, leaving me at Casa Elemento for lunch- In any case I fancied the long hike back down. Sadly this meant more birdwatching, more precisely observing the habits of the wankpuffin. Yep, again trendy hostel syndrome had struck. As indeed had a monsoon. Spectacularly bad timing, this left me stranded under one of the small awnings at Casa with a large colony of wankpuffins, and such is the design of the Casa that escape is difficult.

Half an hour wore on, and action needed to be taken. The rain might never have stopped, and I was within a couple of hours of dusk. And indeed I just couldn’t take the puffins any longer. So, I went out into the deluge. Yep, deluge from all angles. 360 degree rain. My jacket became waterlogged within about thirty seconds, and was therefore useless, and the path largely became a river. I was WET. I’d love to show you photos of it, but wasn’t risking getting anything electronic out of the safe harbour of my drybag.

Halfway down the track to Minca I came across a massive landslide with a tree in it. That was an interesting climb over the branches and through the soft soil. Several of the drainage channels from the hills across the road had turned into raging torrents too, so it was a real clamber to get back to town, including knee-deep wading through an alarmingly fast-flowing torrent across the road. 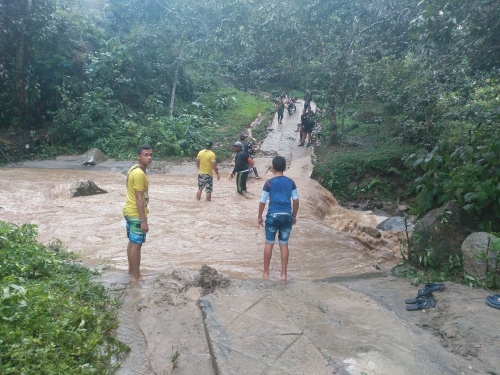 My journey from Minca, as predicted, did not go entirely to plan. Having stupidly decided that it would be nice to spend my final night in the hills under canvas (To be fair, saving 20,000COP off the cost of a room was also attractive), it turned out that tonight was monsoon night. Yep, from about midnight until 7am. Luckily my plucky little bargain tent stood up well to the abuse, the only leakage a small pool at my feet, I think caused by a pitching error.

It had been a big night for the hostel staff, and upon getting up at 7am there was nobody to be seen. Just the cat. Having packed my stuff there was still nobody to be seen. My plan of an early exit was in tatters. At least the cook was up to prepare breakfast, a good start.

Shortly afterwards a taxi driver turned up. Nobody could work out for whom. He sat down and grabbed a coffee with me on the terrace. We heard a huge crashing sound from down in the valley. Hmmm, interesting… What was that?

…as it turned out the taxi was ordered for the German guy who was heading into Santa Marta to start his Lost City trek. Useful timing, since my stuff was packed and good to go. It was 3 times the cost of a bus but since the village was completely deserted I thought it worth taking the bird in the hand. You’ve got to do that quite often in travel. I still regret turning down a comfy lift from Antofagasta de la Sierra since I wasted 8 fruitless hours failing to hitch out the next day. 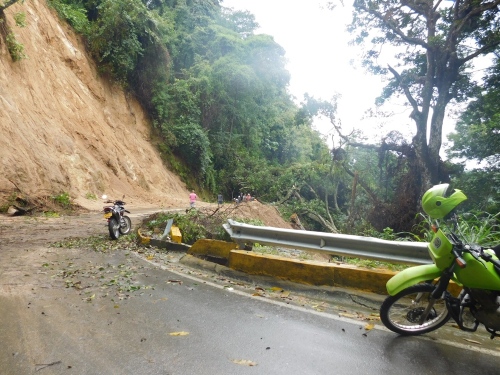 Sure enough, 1km down the winding road to Santa Marta we found the source of the ‘crash’. A moderately sized landslip and a humongous tree across the road. Luckily by this point there were already men setting to it with chainsaws. Whilst I took this to be an entirely altruistic exercise the truth is that the older trees are extremely valuable tropical hardwoods so there’s money to be made… The taxi driver explained that the road is pretty new so the soil is unstable, and the re-routed drainage channels slowly erode the support around the larger tree roots until…Crash!

My second “bird in the hand” moment of the day came at the bus station after buying a direct ticket to Cartagena. The ticket office woman came and found me, informing that the road to Cartagena was flooded. Bugger, bugger, bugger. She proffered a partial refund and a ticket to Barranquilla. Whilst the hometown of Shakira, it wasn’t a place I fancied visiting however it was down the road to Cartagena so it was forward progress. And indeed that bus was leaving ahorita.

Sure enough, arriving at the office in Barranquilla revealed that the Cartagena road was now open. Perfect, another ticket bought and on my way within 10 minutes. This is a bit of a key thing when you’re trying to get places, it’s always better to get as far as you can while you can, since generally opportunities for onward travel open up along the way and otherwise you might never get anywhere!

Sure enough, we arrived in Cartagena only slightly behind my original schedule. A quick, decently priced taxi to the hostel and there began my South American swansong…