It’s fair to say that I wasn’t enamoured with Kandy, at least on first impressions. From the relative civilisation of the Fort area in Colombo, you step out of Kandy railway station and are instantly assaulted with the noise, bustle and fumes redolent of an Indian frontier town. The horns! The horns!

Nonetheless, I dropped my big rucksac at the left luggage office, filling in a fantastic and ancient Ceylon Railways form to do so, and hit the town. Like most train stations here, Kandy Railway Station is pretty much slap bang in the centre of the town, and it’s only a 5-10 minute walk to the interesting bits.

Most visitors start their wandering at Kandy Lake, and in fact it’s one of the most pleasant places in town, unsullied by the frantic traffic of the rest of the centre.

Surrounded on two sides by the main road out of town, the other side of the lake takes you to the Temple of the Tooth and beyond, and further up a nature reserve. Much of the old colonial architecture is undergoing reconstruction including the venerable Queen’s Swimming Baths. 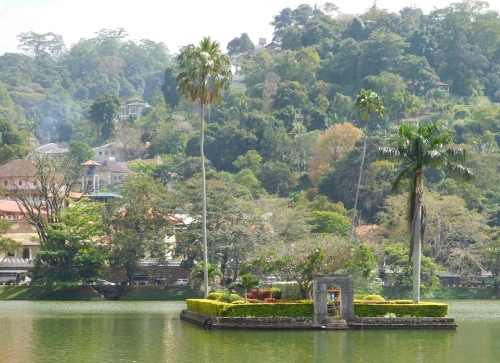 First order of the day however was not sightseeing, it was LUNCH. There are a raft of faintly touristy places in the centre of Kandy, and indeed a number of ‘canteens’, often buffets, where you can pick up a decent meal very cheaply.

A feature of Sri Lankan life which I can’t help feeling was strongly influenced by the Brits is the concept of the bakehouse/tearoom. In Kandy as in Colombo there are dozens of them, where you can pick up ‘short eats’ for a few pence, and a bloody good cup of tea too. One of my favourites was the snack bar in the Queen’s Hotel, one of the finest chunks of old British building in Kandy. Beware though, as a tourist you often get shuffled into a separate posher area with table service, and accordingly good prices. I’d personally rather eat with the Sri Lankan families! 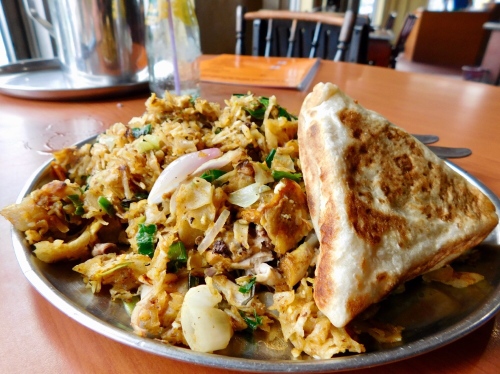 Lunch was something I’d been meaning to try for a while: kotthu rotti, basically a kind of biryani dish with loads of vegetables and chicken. It’s well recommended at the Muslim Hotel in town, however use the toilets elsewhere as they’re truly the bleakest conveniences I’d seen so far in Sri Lanka, a proper Trainspotting experience. Lunch was fantastic though, and really cheap.

Moving on, the place that everyone comes to see in Kandy is the Temple of the Sacred Tooth. It would be disingenuous to call this underwhelming, since it’s one of the most important Buddhist sites in the world, however there are definitely more interesting places to visit.

I’d forgotten to pack trousers in my daybag, and definitely wasn’t trekking back to the station, so first order of the day was to purchase a sarong to cover my legs, as is required to enter. Hey, it’s an embarrassing but functional garment, and you can’t truly call yourself a twatpacker until you have one. Sure enough, a bargain elephant motif number was soon in hand.

Suitably (ridiculously) attired, I entered through the security check. You can wander the grounds at will, but to enter the temple complex you need to buy a ticket from the machines outside, and drop your shoes.

Crossing the moat, you enter the temple itself. There are plenty of official guides around and, whilst I’m usually allergic to being ‘guided’ around places it does seem worth it here, as there isn’t a great deal in terms of visitor information. Halls of pictures are devoted to telling the story of the tooth, a sacred relic which a young prince brought at great danger to himself and his consort.


The Tooth itself is locked within boxes, within boxes, within central vaults. One of those places where the legend and the story are more important possibly than the actual item. Is there even still a Tooth in there? Is it Buddha’s? In any case, it’s an interesting place to visit, and for around 500LKR a guide is a good investment.

Mine took me around the main complex and then left me to my own devices outside, in the leafy grounds. 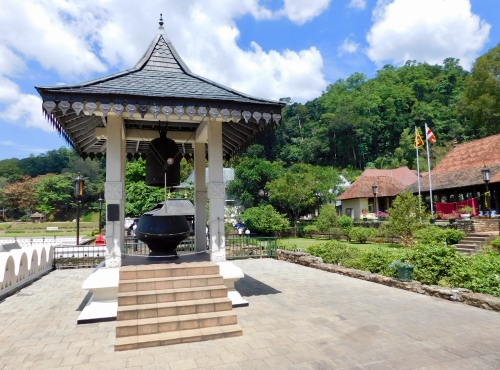 Within the complex there is a large museum dedicated to the history of Buddhism in many countries around the world, and it’s in here that you really get a feel of the worldwide significance that this site has. Countries have spent a lot of money here to display their own priceless relics and artefacts.

The various displays show the incredible spread of Buddhism from its roots in this part of the world. India features heavily.

Suitably enlightened, I moved on to leave the grounds of the temple, however in the midst of this Buddhist site something caught my eye on the skyline. Something incongruous amongst the stupas… Looks a familiar building. 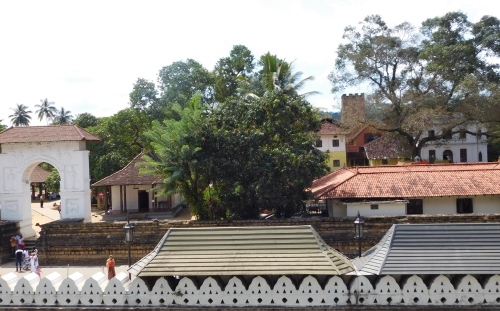 St. Paul’s Church sits in the shadow of the mighty temple, a slice of little England bestowed on this busy town in 1846. 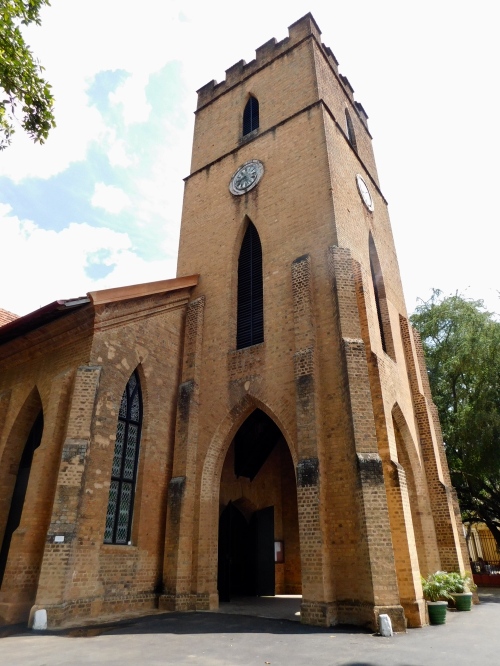 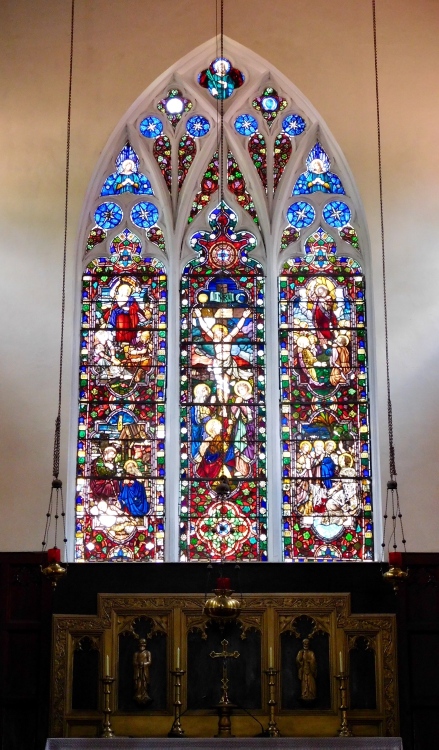 This definitely deserved a few pennies in the collection box. I moved on, by way of a theme, up the hill towards the Commonwealth Cemetery. This is another peaceful little spot presided over by an old Sri Lankan man and, for today at least, his 26 year old nephew. Celebrating his birthday with some strong lager, it would seem.

These are men of stories who demand nothing other than a donation to the upkeep of the place. Men of Received Pronunciation, plummy well-learnt English. Fantastically exotic stories of the early British and European settlers here, and a plethora of demises, from elephants and tigers, through tropical disease to the more esoteric deaths from broken hearts and sorrow from lost fortunes. Every headstone has a story.

Sometimes the low key stuff is the best stuff, and my visit to the cemetery was absolutely one of the highlights of my time in Kandy. The celebrating nephew proudly showed me photos of Prince Charles’ (fairly) recent visit here, and he received a reasonable contribution to his birthday beer fund not that, particularly, by this point he needed it. Neither did the graveyard monkeys, who nonetheless pursued his can of lager with a zeal rarely seen outside of seagulls. I left him, cursing the local simian population, and carried on back towards town.

Taxi drivers are all sharks, and other travel truisms

Harsh possibly, but generally true. By the time I’d walked back to Kandy train station a storm was disgorging itself on the small town. A far from ideal time then to get a Tuk Tuk, but sometimes needs must. My chosen accommodation wasn’t far from the town centre, but up a ferociously steep hill. Not ideal fully loaded.

The prices quoted were, however, truly bonkers for such a short trip and I wasn’t paying it. Eventually I managed to call the bloke at the accommodation who quoted a price, still about double what it should have been, but halfway reasonable. This was communicated to the driver and he grudgingly agreed. Sort of, sort of not accepting my final 50LKR of bargaining. We wound our way up to the accommodation in an infernal little tuktuk and he then left in a cloud of curses and Sinhalese insults after I wouldn’t pay the new price he had dreamed up during the journey.

Or indeed Bates Motel. I’d chosen this one for a number of reasons: The frankly suspicious 10/10 score on Booking.com, the lovely looking pool and last but not least, the review slating the place and pointing out that the owner was an ‘obvious alcoholic’. In retrospect, only the third factor held any water.

A strange little place, it didn’t have a pool (This was the hotel a few doors down) however did possess a general air of dilapidation and the threat of murder. Three nights here really were too much, particularly with a slew of backpackers passing through including the standard dead-eyed group of young German lads and ‘crazy’ Aussies.

The ‘obvious alcoholic’ owner however was a decent enough chap, so we bartered a tour the next day taking in the three ancient temples nearby, and then dropping me at the Kandy Botanical Gardens just outside the city.

They all merge into one

Temple fever is a feature of many a trip to the far East, and it’s a condition I identify strongly with. The situation’s not significantly improved with a ‘guide’ and since I just had a driver, it was up to me to wander round and discover the insights. Basically, there’s not much to differentiate the three sites other than to state that they are all very, very old. 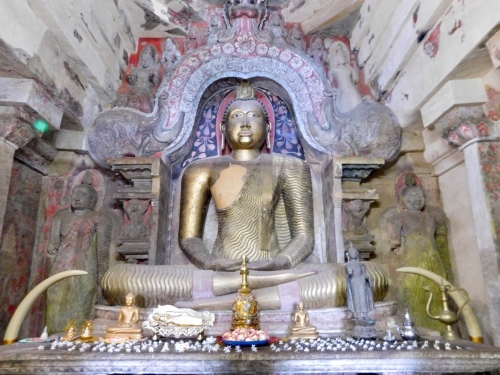 Yep, cumulative Temple Fever over a lifetime of travel really had set in. But hey, a good start to the day anyway. My genial host dropped me at the botanical gardens for my horticultural afternoon. They are really simple to get to, just a couple of KM from the centre and reachable via many of the local bus lines (Super crush load bags of fun)

These definitely feature on some sort of elderly Sri Lankan tour. Possibly all of them, indeed. However, especially if you’re a massive plant geek like me, they aren’t to be missed. Simply staggering in scale and quality.

Start off with the orchid house… 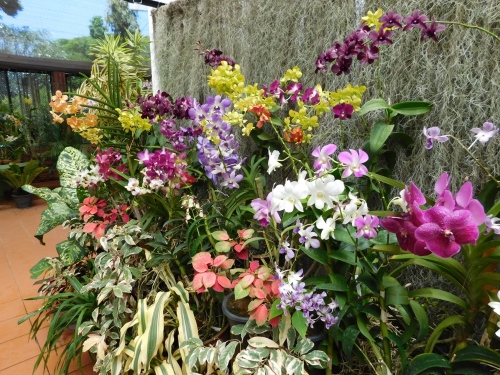 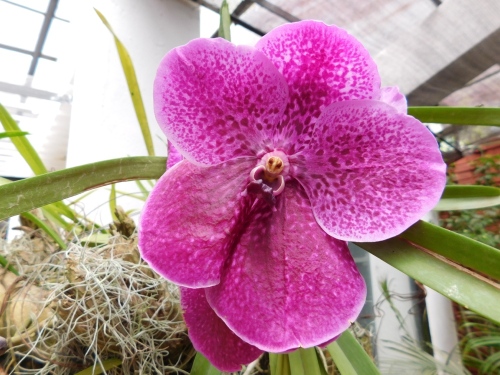 From there, just pick a route and wander to your heart’s content. A lot of thought and care have gone into these gardens, with species from all over the world in themed areas and some truly spectacular ‘walks’ lined with enormous specimens. 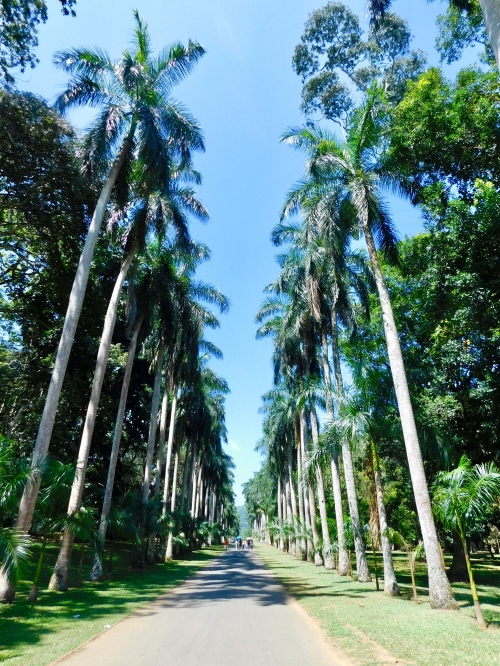 One of my favourite settings was the Japanese garden. Sadly I don’t really have the hydraulic engineering experience to replicate the babbling brook at home, although I have planted a huge Japanese Maple tree in part homage…

The background of the garden’s designers shone through in the wide open spaces. Were it not for the blazing sunshine, I’d swear I was in Hyde Park…

Kandy Botanical Gardens can properly be described as ‘encyclopaedic’- Whilst on the whole this is a good thing, some of the corners of this place do veer from the sublime to the ridiculous. Initially I blamed the sunstroke however then, definitely did see the grass collection.

Yep, that was time to leave. A short stroll outside and a hop onto a supercrushload bus back into town. Most of them go to the Clock Tower. I really, really didn’t want to head back to Bates Motel just yet, so hung around in town to grab another dose of the Muslim Hotel’s ace kotthu rotti then wandered back. Wandered, I wish to clarify. Definitely wasn’t entertaining the concept of another robber baron tuk tuk driver, and besides, the blurb said it was close to town…

…was it bollocks. Close probably as the crow flies, neglecting to mention the fact you have to climb about 3000 rambling steps through the favela of Kandy. Hmph.

The next morning it was time to escape, and to head onwards to the lovelier end of the hill railway. My host kindly conveyed me down to the station, avoiding yet another tuk tuk tussle. Ideal. A crow stole my first breakfast sandwich at the railway station.

Next up: Sri Lankan hill railway adventures- Kandy to Ella