And so it came to head southwards. Holiday time on the wane, and in desperate need of some beach, I decided to head towards the south coast. However, one stop I hadn’t considered was Yala national park. Right on the way, and with some careful bus scheduling no more than a night out of the diminishing days left… Ideal.

Sita’s Heaven again wholeheartedly proved their worth by lining me up a decently priced room/safari package at the cheesily named La Safari Inn in Tissarahama. The bus I’d have to sort out myself but again the guy from the hostel was helpful way beyond the point he needed to be, showing me the bus stop on the busy road south and then returning an hour later when said bus hadn’t arrived to explain the other routes down there.

Sure enough, none of the quoted buses turned up… I suspect that even if they had, it would have been a proper supercrushload situation. Luckily there were a few other travellers looking to head that way, so as often happens on the road, we clubbed together and found a minivan driver to make the trip. It worked out five times more expensive than the bus, but still not more than $5 or so for the 2-3hr trip. If you’re travelling as a family or a small group, this is definitely the way to go, as they drop you right where you need to be. It’s ever so slightly less crushed than a public bus too… Once you stop and re-configure the seating as we had to due to complaints from the passengers folded up in the back…

Tissa was a welcome change from the hill towns, a proper working town, however exceptionally hot. I was tempted to upgrade from my somewhat muggy downstairs fan room to one of the amazing, airy a/c rooms upstairs however had a stingy budget traveller moment and resolved that I was going to have to be up at 3am for the safari anyway so it would be money wasted. I headed out, map in hand, to survey the area. And met this chap…

Monitor lizards are HUGE… and quite alarming when you suddenly spot one. Luckily it didn’t try to eat me, although I think the pack of dogs just up the road would have tried if I hadn’t immediately fled on my rickety borrowed hostel bike. I headed towards the lake, since it’s probably Tissa’s best feature, avoiding the busy, fume-filled town centre.

There’s something magical about Tissa. I’m not sure if it was the fact that it seemed so different to Colombo and the hill towns, or whether I’d just timed it right, but the early evening light was some of the most photogenic that I’d ever seen. A creamy, golden glow making even Tissa’s grubbier corners radiant.

Apart from the ‘boat tour’ touts, it was refreshingly hassle-free down by the lake too. From what I could gather the boat tours weren’t really worth it, bring a decent zoom lens and you can see the smorgasbord of birds out on the water. Escape them and you’re amongst the families enjoying the sun and taking in the air. And, indeed, the pride of the Samarasinghe bus lines fleet:

The beautiful Cleopatra ‘Big Boss’ edition, with more strobes, speakers, general tat than I had ever seen attached to a bus. A party bus, hired out for weddings and, probably, funerals. My picture taking and, let’s be honest, whiteness stood out instantly and I was good-naturedly dragged over to survey the bus. Continuing a theme of cameo foreign advertisement appearances which began with my feature in the 1998 Zambian Railways calendar, I did a short ‘piece to camera’ extolling the virtues of the Samarasinghe fleet which now features, embarrassing and prominent, on their Facebook page.

I extricated myself from the clutches of the Samarasinghe team and continued my lakeside wandering up to the end, and then inland to have a look at some of the ancient stupas which form Tissa’s other key attraction. I became seriously glad that I’d taken the time to spend a night in Tissa, wandering by the river and watching all of the locals come to bathe, enjoy and hang out was a real highlight, a peaceful atmospheric evening. Apart from the one crazy drunk following me around, there’s always one.

I wandered into town, happy to have seen a different side of Sri Lanka and feeling like I’d soaked up the delicious evening sun. Tissa town centre turned out to be neither a hive of activity nor a culinary hotbed so I wandered dejected back to La Safari Inn. Sadly what it offered in terms of decent  price it lacked in terms of menu options so I settled for a somewhat joyless vegetable rice and then hunkered down for the night.

Tissarahama isn’t why people come to Tissarahama. Yala National Park is the reason for the hordes of visitors descending every year. I’d been warned off the other big natural park in this area Udawalawe due to visitor numbers but I’m fairly confident it couldn’t get much more packed than here. Leaving the hostel at a distinctly ungodly 4.30am the road to the park was filled with a strange Mad Max-style convoy of safari trucks all jostling for position ahead of the park opening.

Aside all of this chaos however, it’s wholeheartedly worth it. A quick glimpse in the half light of a young bull elephant led to a morning filled with the greatest diversity of wildlife that I’ve ever seen in one hit. Birds, warthogs, random chickens, deer, even 2 or 3 glimpses of the park’s elusive leopards. Simply incredible. 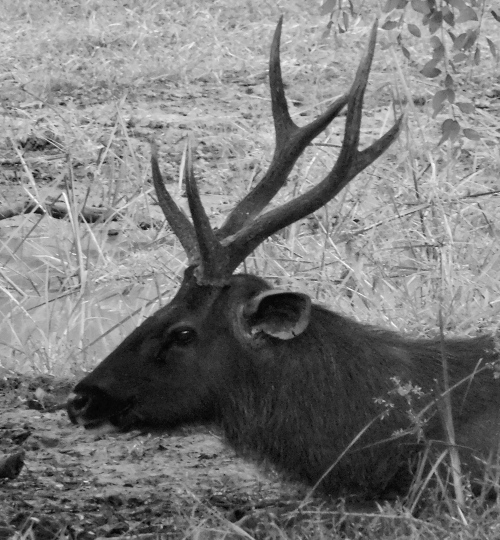 Yala is an exceptionally popular National Park for this reason. A skilful driver and a guide is the key to a good day, since they know where the animals are likely to be, and possibly more importantly, can get in first before the throng descends. A couple of times during the day we spotted leopards and were then suddenly besieged:


Yala has an enormous range of landscapes, but sadly suffered badly in the last Tsunami. Nature herself has rebounded but the small fishing settlements haven’t. Along with the strangely lunar, and now deserted, coastline there are a number of huge lakes where you find the best bird life.

Having had such an early start, we left the park by midday. There is the option to do a full day safari, however in my opinion this isn’t really worth it. The park isn’t a polished tourist attraction, so you can’t have a long lunch or a chillout in between the morning and afternoon sessions. For me, over five hours of being bounced around in the back of a safari truck along dusty tracks was enough. I don’t think I’d have enjoyed an afternoon of it too.

Since Yala safaris are such good value for money (I paid less than $50 for mine in total, all in, including accommodation, park entry fees and a packed breakfast!) I’d strongly recommend doing the morning safari one day, then coming back the next day for an evening safari to get the best range of wildlife. Sadly this wasn’t for me, beach time was calling!

La Safari Inn kindly dropped me at the surprisingly civilised bus station in town for my next hop.

The best experiences in travel are the ones where you’re just interacting as a local, and the modest cafe at the bus station provided me with one of my best snacks so far- Veggie curries, a good  bit of rice and a ginger beer for about 75p. Suitably sustained I caught the next bus south, towards Matara. There’s no need to forward plan too much, the southern corridor is a major route with buses every half an hour or so. Getting on the bus at the first stop is a great idea since it saves you the worst of the crush later down the line…