Cape Town and surrounds had been brilliant, however it was now time that we moved on and saw some more of what South Africa had to offer. We decided that we wanted to see both Stellenbosch and Franschoek, a bit of a whistle stop tour since Addo was calling, and there was a fair bit of ground to cover.

Leaving Cape Town the motorway is all pretty civilised, everyone driving fairly sensibly, until the point when it all came to a sudden halt, and a big dog was running down the carriageway.

I promptly forgot all of the sage security advice about not getting out of the car for any reason whatsoever, and jumped out to try to grab said dog as it passed. However, as it loomed larger it looked a bit like a dingo, and suddenly I wasn’t really sure if it was someone’s dog at all. Did it have a collar? Yep, maybe I won’t! It passed, pursued by a few guys, we moved on. Was it a carjacking thing? Nah, just #Africa. 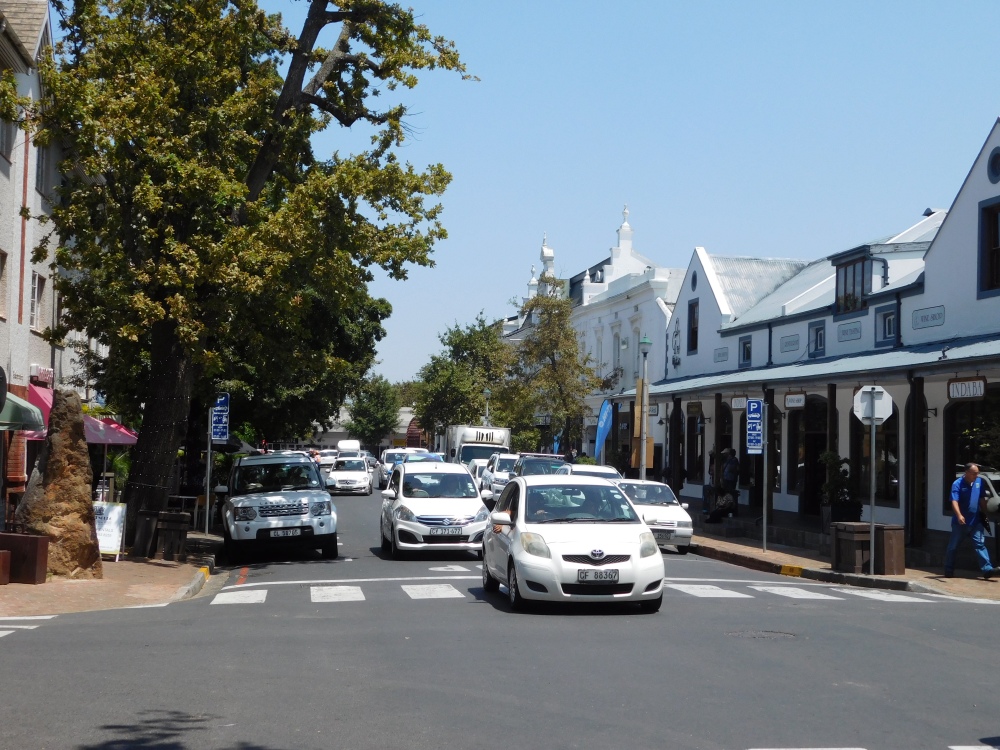 Stellenbosch really isn’t far from Cape Town, and more than doable on a day trip. There’s a lovely bustling feel to the centre, and you really know that it’s a big university town, with hordes of fairly posh students wandering around. We settled in for an amazing brunch on the pavement at one of the many decent cafes around- Again, a really reasonable price… Entertainment provided by a slightly random guy in a suit making animal noises at passing shoppers. Very good, authentic animal noises. Possibly the greatest part of the theatre was the annoyance of uptight passers-by at being done by him…

The architecture in Stellenbosch is stunning. We took a wander through many of the reconstructed old Cape Dutch dwellings in the town museum, a fascinating insight into the past. You really miss the “Cape Doctor” wind up here, it was a quick acclimatisation into the solid heat of the interior. 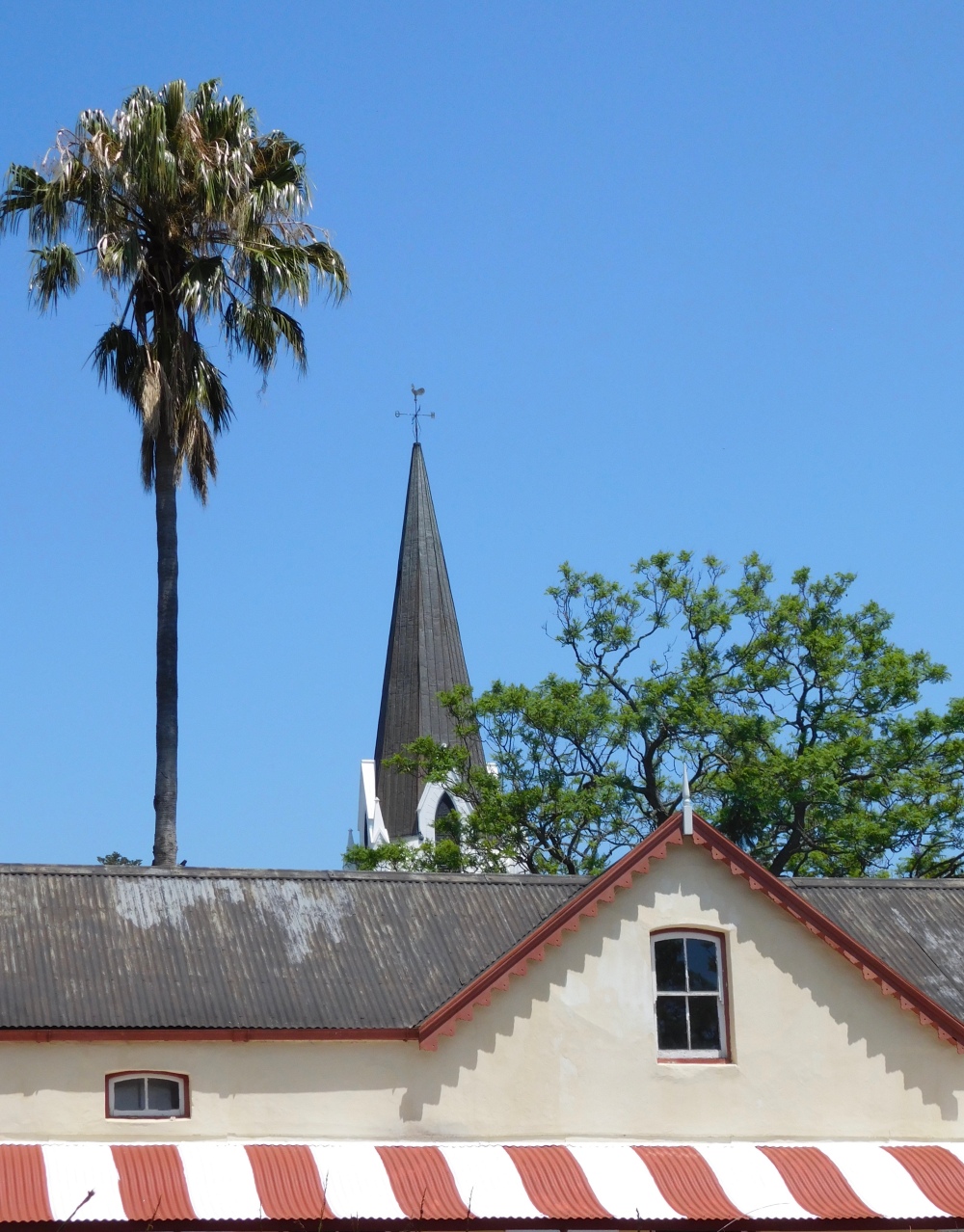 Moving on, whilst Mark was starting to wilt from the heat, I really wanted to see the University botanical gardens so he happily parked himself in a shady spot and I went for a wander.

Clearly we had spoilt ourselves by visiting Kirstenbosch first… Stellenbosch gardens aren’t comparable with the encyclopaedic magnificence of the former, but nonetheless a really nice place to while away a few hours… 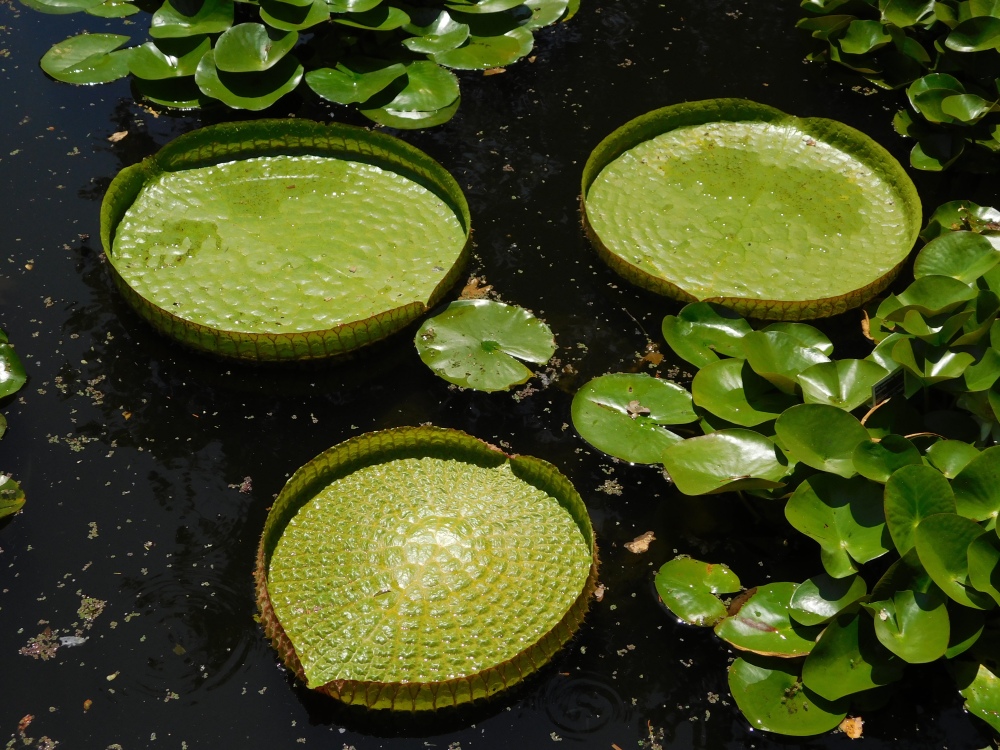 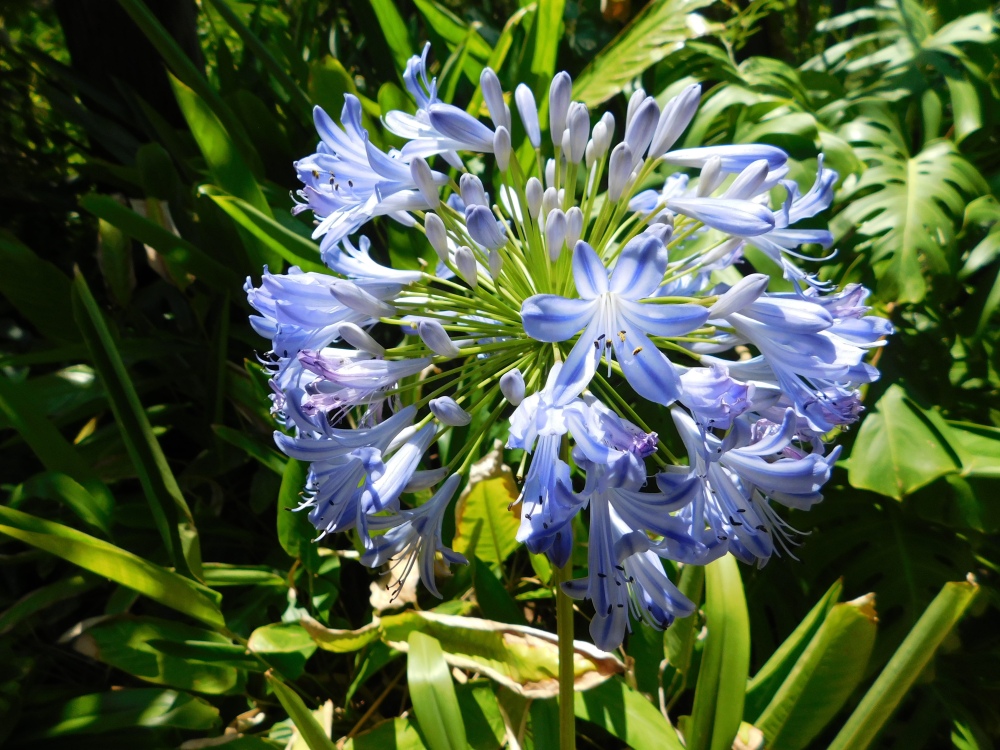 Onwards and upwards, and further into the Cape Winelands. We’d decided to spend the night in Franschoek, and in hindsight this was a great decision. Stellenbosch was great to see a bit of life but after Cape Town, we were craving a bit of country solitude.

Once you stat climbing into the mountains, the scenery becomes truly spectacular. It’s ALL about the setting here. Franschoek is a particularly lovely corner. 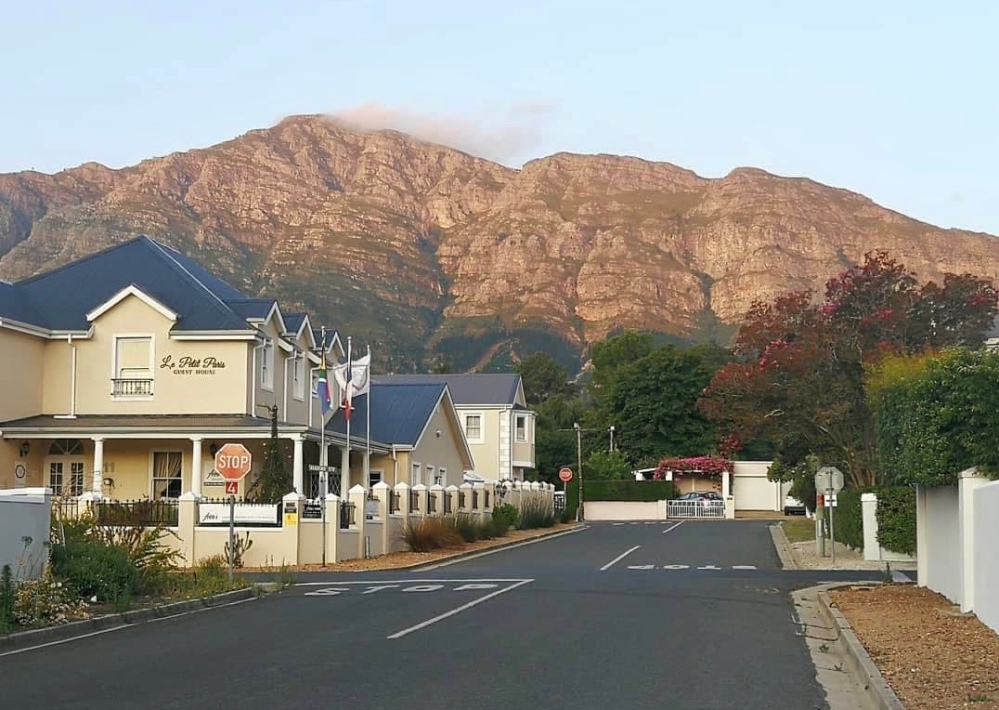 I’d have posted more landscape shots from the drive, but if you pictured every spectacular corner, you’d never get anywhere! Oh, and I was on driving duties, and I learned from my Miami debacle that it’s good not to try to take photos from the driving seat of a hire car!

Franschoek is one of the true foodie centres of South Africa, but somewhere where you really need to book in advance. I’m rubbish at planning to this extent, therefore was hoping to get in at the Hussar Grill, but nonetheless we managed to find a table at a fantastic steak restaurant, which really didn’t disappoint. You can really go to town here, with high end French restaurants littering the town. Next time maybe!

We really lucked out with accommodation in Franschoek. In general, this valley is seriously expensive for accommodation, high season especially so, although there is a good deal of choice around. Too much, in fact, and far too easy to endlessly go in circles on Airbnb and Booking. Eventually though we saw what seemed like a cracking deal near the centre of Franschoek- “Budget” double room at The Corner House for around £50 including breakfast. Done. Afternoon by the pool, evening wander into town for some food… Done!

As it turned out “budget” just meant that this was one of the smaller rooms. In no other aspect could this place be considered remotely budget, beautifully furnished and in general far, far plusher than could ever reasonably be expected for £50 a night. Breakfast in particular was incredible, with champagne included. Sadly, as designated driver, I had to leave it at just the one glass!

By now I was forced to concede that Mark probably did have something a bit more than man flu. Having rung the travel insurance they directed us towards a private clinic nearby in Paarl and (almost) en route. However, we decided to try the local surgery en route as a screening stop before we pushed the big scary Insurance button. A Saturday morning… the ‘duty’ surgery in town. No cars outside, but within the waiting room around 20 people waiting, all people of colour.

THIS is the real divide… We were able to just get into the car and drive to the plush private clinic rather than waiting for hours. Food for thought. Access to quick, quality healthcare truly is one of the greatest privileges we possess.

Booked in and seen remarkably quickly, Mark was soon hooked up to IV antibiotics… Tonsilitis! Amusingly everyone was trying to speak to him in Afrikaans. Being very tall and blue eyed around here leads to certain assumptions. Lekker!

Leaving around lunchtime, we had a big push ahead- 270km to Ladismith. We really wanted to get some distance under our belts and back on track with the trip. Down to the coast, to dip toes in the ocean.

Originally we’d wanted to stop in Montagu, at a hot springs recommended by a friend, however this wasn’t compatible with a last minute high season weekend booking! Absolutely nothing up for grabs. And in any case it wasn’t quite enough of a hop to catch up time and distance.

Kicks on the Karoo, via Route 62 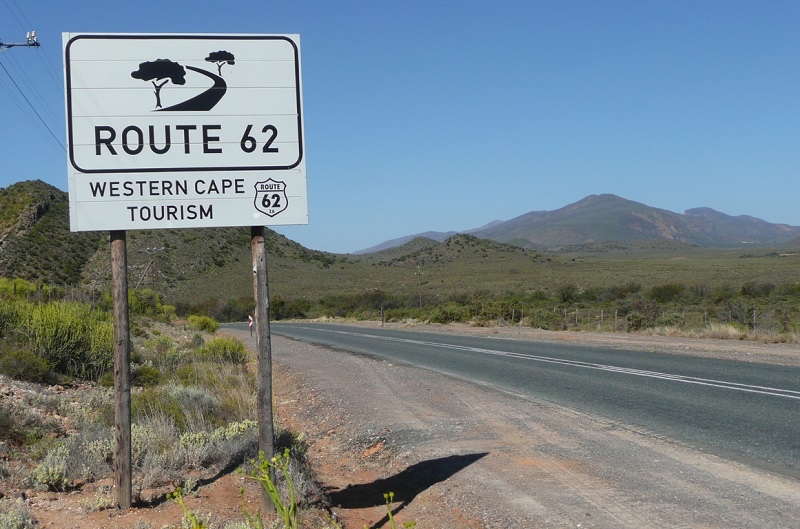 Route 62 has become a big ‘thing’ in South Africa now. Stretching throughout the Klein Karoo it does have the feel of a big American road trip, with lovely wide open stretches of road and vast panoramas ranging from arid desert to scrubland. It’s at times like these that you highly value a 75mph national speed limit and heavy right foot…

We stopped for brief refreshments in Barrydale. I’d been sorely tempted to spend the night here for comedy purposes, the hotel accommodation looked exceptionally ‘rustic’ and very Afrikaans. A biker bar with rooms.

Mark wasn’t convinced we’d last the night, and to be honest having transacted with the huge and scary lady at the petrol station I wasn’t convinced either. Thankfully the shotgun undoubtedly under the counter didn’t come out!

Here again we confronted the reality of poverty in SA- Two guys sat under a tree who approached and asked me for food. What, really food? Yes, bread and fish… I’m always skeptical by people asking for money, but who can say no to buying food for a hungry man? 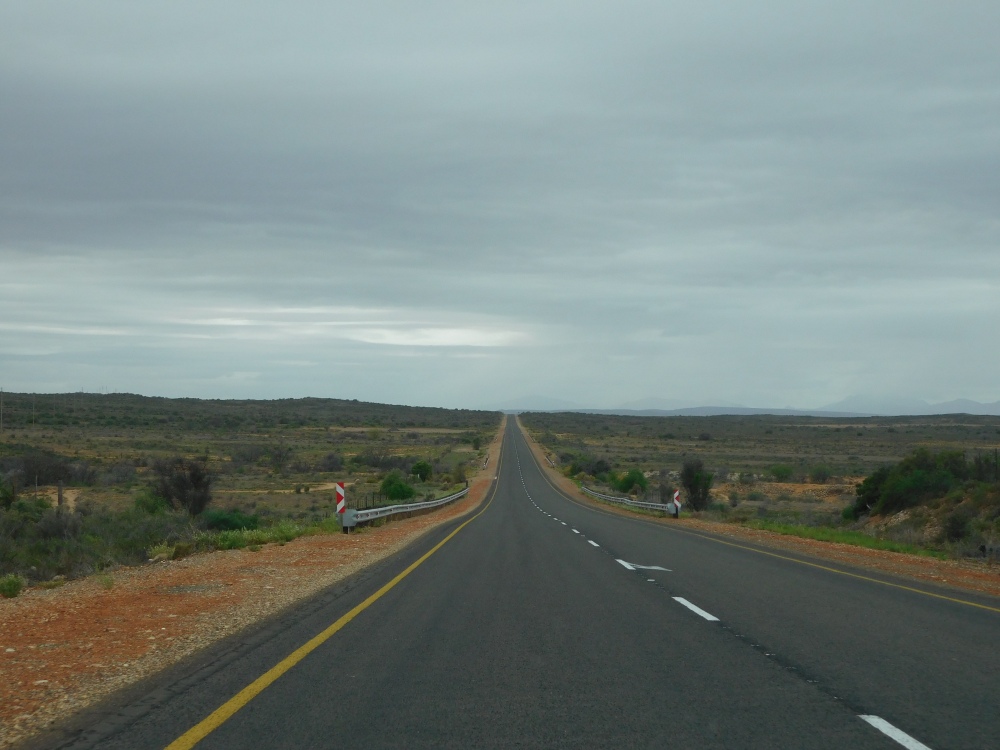 We moved on into a long stretch of High Karoo road. Even with a humble Polo, it felt like classic road tripping. Mile after mile of the scrub with isolated small settlements. Moving back into civilisation we passed numerous ostrich farms. Mark doesn’t like ostriches. This was not to be the holiday where I’d ride one.

Our home for the night was in Ladismith- Close enough to the coast to have caught up lost time, but no more than the mammoth 5hr drive up/down from Franschoek via Paarl. An absolute gem found on AirBnb, and just the thing required after a big trek down. Just a simple room in a newly converted house, but this and the mammoth included supper was perfect for a late arrival. Really friendly hosts too. There’s not really much to the town though.

Suitably refreshed, and obviously very well breakfasted, we set off down the Huisrivier pass towards our next stop. Wide open expanses of Karoo gave way to plunging gorges and a gentle easing of the solid heat. Mark and Percy (the Polo) were enjoying themselves. 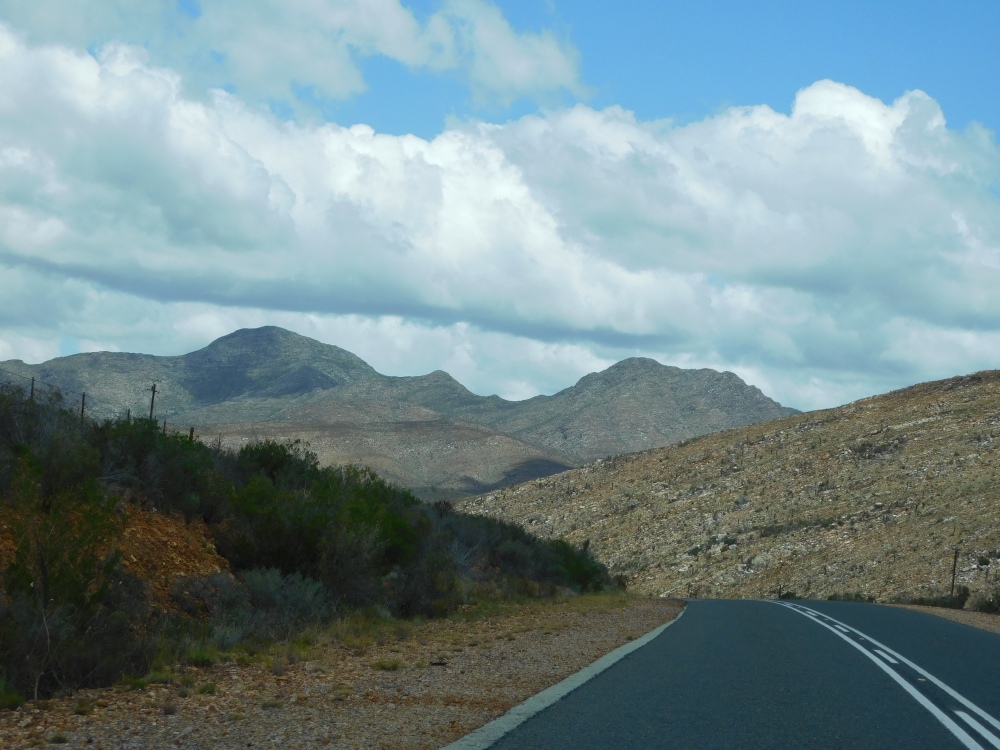 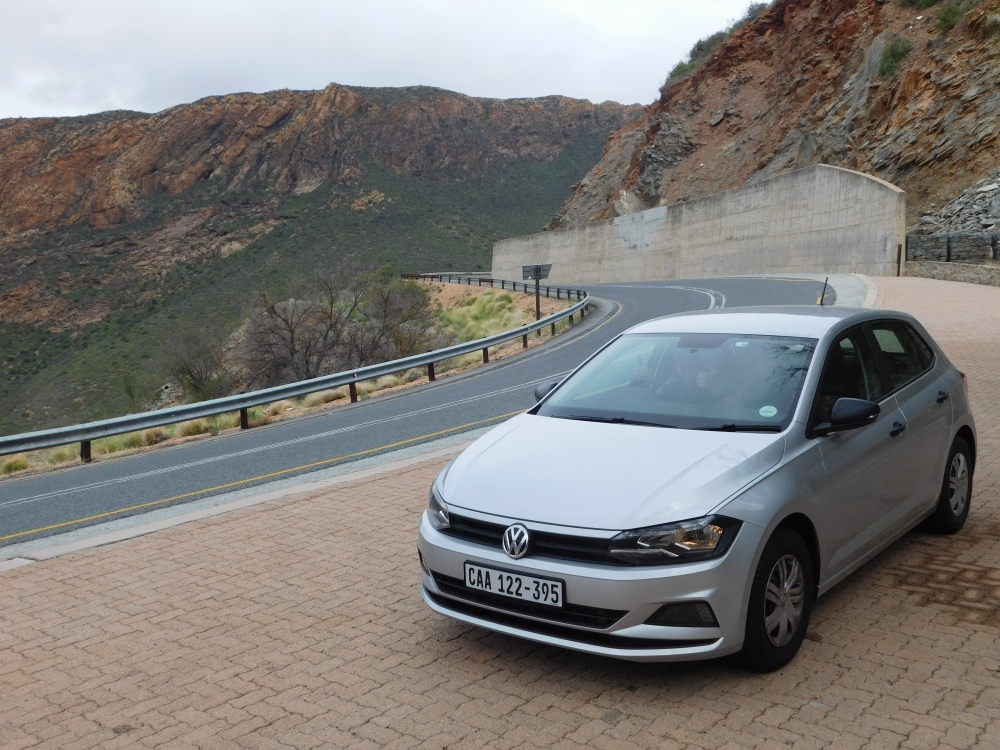 Oudsthoorn looked a decent enough place, but the issue about driving holidays is that when you’re between overnight stops, all of your worldlies are in the car. In SA this can definitely be an issue. As we pulled up to what looked like a fairly decent independent coffee shop I noticed (copper’s eye no doubt) a bloke lingering, and taking more than a little interest in the car. OK then. Moving the car around the block just resulted in him sidling over to the new spot. The hassle factor of a smashed window and nicked stuff didn’t seem worth it, so we moved on.

Maybe it was the overcast weather, but nowhere seemed particularly inspiring today. We’d made it down to the coast and were in the mood for a mooch, however Mossel Bay and Plett really weren’t ticking any boxes. Uncharitably some could compare parts to Weston’s delights. Nonetheless we’d finally got our ducks in a row with a 2 night AirBnb stay the other side of George, so off it was time to head.

Next edition: Wilderness and Beyond