I left St. Petersburg in the dead of the night, in order to catch the Krasnaya Strela (Red Arrow) overnight to Moscow. Luckily Simple Hostel was only a ten minute walk from the station thereby avoiding another encounter with rip off taxis.

There are dozens of trains which ply the busy St. Pete-Moscow route. The fastest are the daytime sapsan trains, apparently very comfortable and which take around four hours. These are a relatively recent introduction based on the German ICE trains. The fare seemed to be around £40-£50 when I checked.

I decided to take a night train, since another full day in St. Petersburg was preferable to a late arrival in Moscow and also it saved a night’s accommodation. I paid £30 for the train via the Russian Railways website, in a second-class sleeper carriage. This worked out very well, since I booked an empty room and it stayed that way for the duration.

The Krasnaya Strela is Train 1 in Russia (I am currently travelling on Train 2!) and, as with all of the “named” services it offers higher standards of accommodation.

The inside has been described as a “Russian train manager’s idea of luxury” and whilst I think this is slightly harsh they have definitely gone big on the drapes and maroon. Despite this it’s a very comfortable place to rest overnight- My carriage was no more than a few years old and scrupulously clean.

They also provide a slightly random selection of food and accessories. I’m going to treasure the Russian Railways shoe horn. 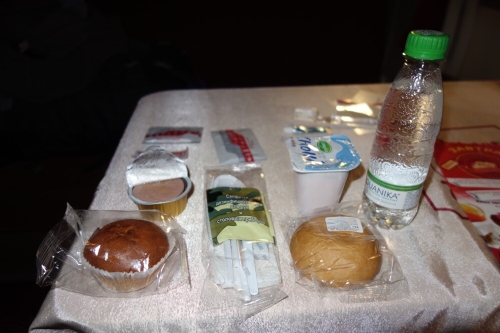 The train pulled out of the station dead on time at 2355hrs. A bit of a clank-and-rattle fest at first however I soon settled down to sleep within the comfortable nest. I “upgraded” myself to the more expensive bottom bunk as I was alone anyway. 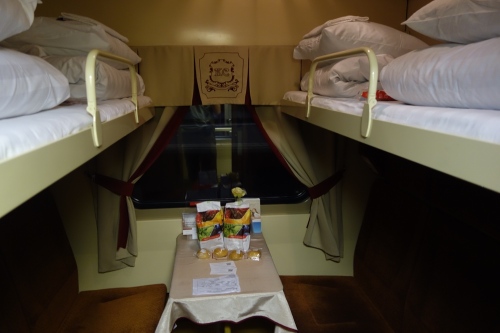 There are a range of variables in the price of sleeper trains. The second class cabin seems to be the best compromise between price and comfort. I personally prefer the upper bunks also- These are slightly cheaper and allow you the chance to excape your cabin mates as well as sleeping when you want to. It is a bit of a climb up though, which takes practice and contortion at first!

And so, I arrived into Moscow dead on time the next morning…