After intense trepidation on the Baltic cruise I entered Russia with the minimum of fuss. Not even a glove/bum interface. Leaving the ferry terminal however my attempts to get a reasonably priced taxi to the hostel were completely in vain, as the drivers there tried to charge me about 3 times the going rate. As it was a nice day I decided to walk, primarily because I couldn’t be arsed to argue this early into Russia.

It ended up a very pleasant walk, combining cracking weather and a route up the River Neva towards the centre of the city, seeing some of the sights on the way including this nuclear sub and the faraway domes of the city’s cathedrals. 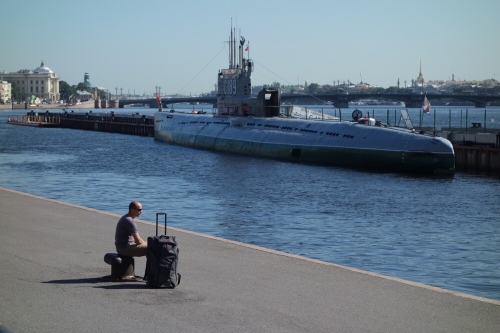 This was going to be a litany of swearing about Russian taxi drivers, Apple Maps and EE however I’ll just restrict it to Apple Maps for not showing the other bridge over the Neva, thereby immensely confusing me and causing a rather large diversion. In terms of EE, I’ll just ditch their cursed SIM card in favour of a Russian Megafon one as soon as they unlock me… £3 for 6 GB seems a slightly better data plan than my current £8/MB, which therefore denied me the chance of summoning an Uber cab instead.

Eventually I arrived at the place I’m staying, Simple Hostel Nevsky. [retrospective enquiries with a map app suggest that my walk from the ferry terminal to here was 5 miles, so I guess my bag isn’t that heavy after all.] I’ve been really impressed with this place, fantastic comfortable common room, nice beds and very helpful staff who don’t appear to mind speaking the odd bit of English. Scrupulously clean too. And some great guests. We’ll come onto them later. 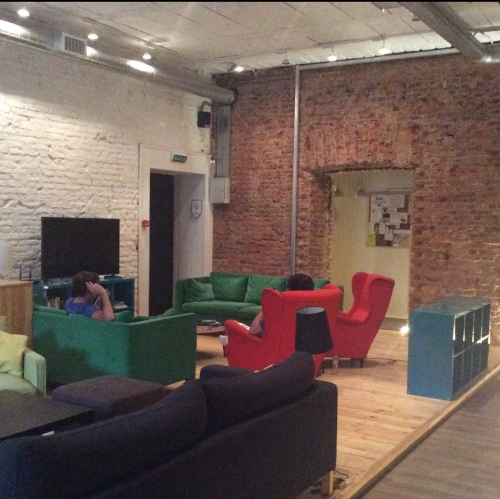 The only downside to here is that they don’t allow alcohol. I can see the sense overall and the atmosphere is great anyway, but it is nice sometimes to have a beer “in” rather than going out to a bar. Hashtag firstworldproblems.

It’s incredibly well located, right in the middle of Nevskiy Prospekt, arguably the grandest street in St Petersburg and the gateway to all of the main attractions. Nevskiy starts by the river Neva, so you’d be forgiven for thinking that number 78 is reasonably close- However it’s actually half an hour’s walk due to how large all the buildings are!

St.Petersburg is by far the most historically interesting city I’ve been to so far. The range of historical sites is immense, and in particular the Hermitage museum is truly staggering. Floor after floor, room after room of utterly priceless and ancient items. 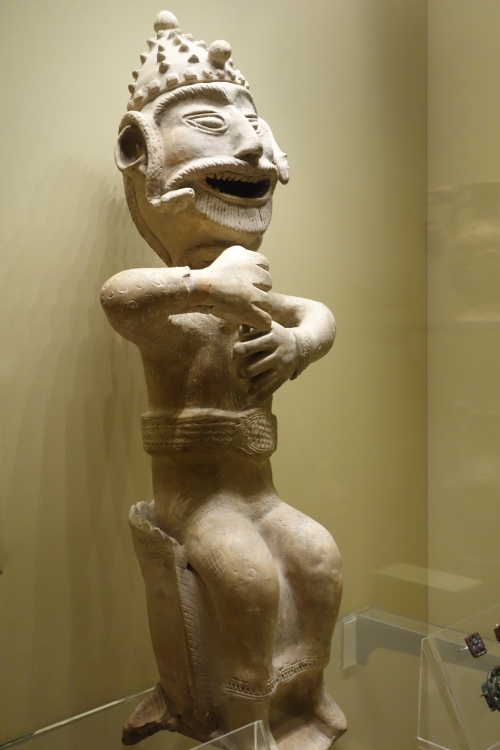 Likewise, there are numerous other historic and beautiful buildings dotted around with a frequency to shame London and Paris. I ended up doing a lot of walking, as most of the sights are a long way from each other and not necessarily in locations where the Metro would help. That’s fine, it’s all bankable exercise!


The above church is beautiful. The inside is equally well decorated with the walls and ceiling covered in fabulously intricate mosaic work. It was built to commemorate the death of Alexander II in 1881 at this spot, and was intended for use for services solely honouring his death.

Some of the mosaic work is truly incredible- The below was conceived with a different method and looks more like a painting… My camera didn’t really like focusing on it though. 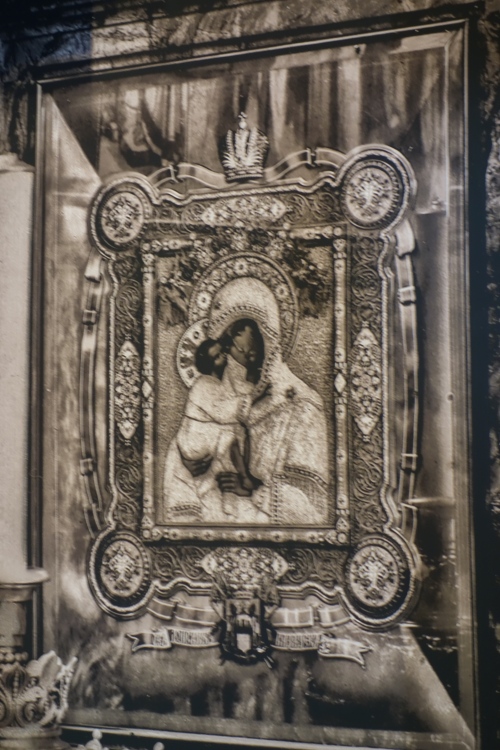 The scenic highlight of my trip was probably Peterhof, a magnificent house and series of formal buildings which is further out towards the Gulf of Finland. You get there by means of hydrofoils from the piers at the bottom of Nevskiy Prospekt, by the Hermitage museum, costing 1200Rub for a return trip. The hydrofoils themselves are fantastic Soviet relics with hulking great engines. They don’t appear to be the most reliable, ours stopped shortly before landing and then was a little reticent about restarting. We made it though.

Peterhof was all-but-destroyed by German forces during the Second World War, but since then has been extensively renovated, and there is still work ongoing to restore parts of the gardens. If you go, allow a good three hours before your return trip to allow a wander, it’s huge. Peterhof has been called the Russian Versailles, and the most obvious and spectacular feature is the profusion of fountains everywhere. 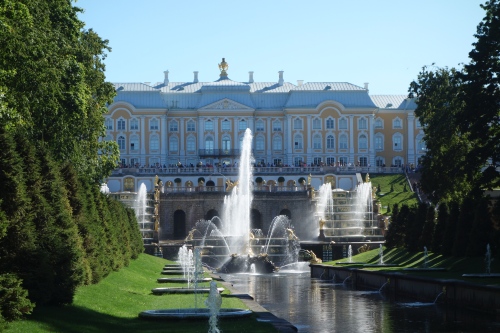 I was glad to have nearly a full week in St. Petersburg, as it meant that I could space out the sightseeing so that it didn’t seem like a rush at any point. With the amount of walking around, any more than 4 hours sightseeing at a time becomes a bit much and you start to rush through things that you really need to see at leisure. I also visited the Peter and Paul Fortress, including the torture museum with some truly gruesome implements:

I won’t go into the mechanics of the above implement, however suffice to say that a number of the machines featured relied on splitting one’s body in two via, er, the most sensitive spot. Ouch.

Despite the gruesome stuff, and the prison museum, there is also another fantastic spire there. Luckily I was blessed with a clear day to take some decent photos. 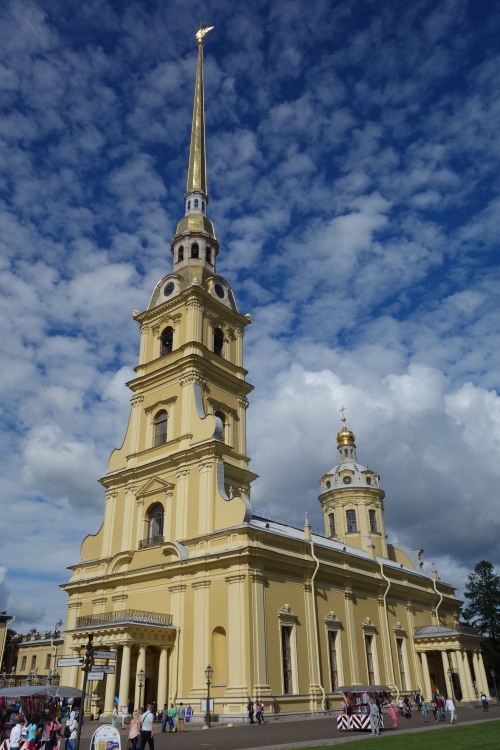 On my last day I didn’t have to catch the train until midnight so also managed a visit to St. Isaac’s, with both a spectacular interior and a panoramic view over the city. 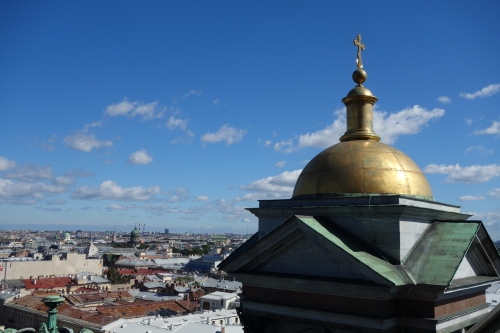 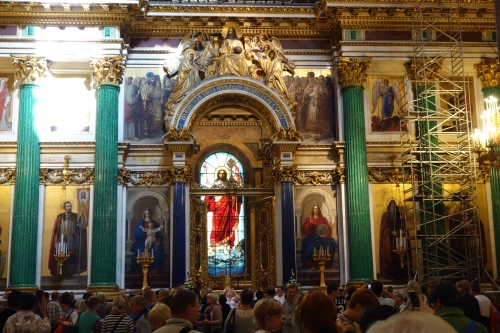 All in all, St. Petersburg was an absolute blast. I was blessed with a sociable hostel and went out nearly every night. There is a good bar scene in St. Pete which doesn’t tend to even get going until 2am therefore some late nights were had. Prices of beer in bars are generally pretty decent, around 250Rub for a decent place. It does all add up though! Beer in supermarkets is very cheap, around 40-50Rub. Eating out is relatively cheap too due to the Ruble currently standing at 100-1 against the pound.

I did go on the bar crawl promoted by the hostel, along with another British guy (Very few Brits on holiday here!). This ended up to be pretty bad value, starting at 8.30pm in some empty bars with the only “incentive” for the price being some horrible shots. It did however have the marvellous side effect that I met Alexander, an ace local guy and Sarah, also visiting from the UK. We started the evening’s festivities after the crawl, taking in some more local spots suggested by Alexander and getting thoroughly drawn into his suggestions of vodka, whiskey and far more beer than is considered healthy. We ended the night in a rock karaoke place which was…lively.

Most of the decent bars are dotted around Nevskiy Prospekt and also [apparently ‘notorious’] Dumskaya Street.

I’ll end this post by drawing your attention to the new 72hr visa-free scheme that is running in St.Petersburg- Essentially if you come on the overnight boats from Tallinn or Helsinki you can take advantage of coming to Russia without the hassle of a visa. Cheap flight to Tallinn, overnight into St. Pete and 3 days sightseeing. Sounds like a decent long weekend to me!

Next instalment: Overnight to Moscow via the “Krasnaya Strela” (Red Arrow) sleeper train.

One thought on “Adventures with St. Peter”