Ah, Beijing my dear. After an unscheduled few days back in the Chinese capital I am definitely feeling the love for it a bit more.

My time in Beijing the second time started a bit stressfully… Returning from Pyongyang, the plan was for Sarah to book flights to Japan and to either meet me there or in Beijing. However, having finally managed to get connected to the Internet at the airport neither of this things had apparently happened.

We met at the Murder Hostel again since it was convenient, for Major Problem 2 to arise. I’d already booked and paid for a room, since Sarah’s booking could not be found. However once she arrived and tried to register (In hindsight, if we’d have anticipated the problem I’d have simply smuggled her in), the hostel went into complete Procedure Rain Man mode and refused to book her in because she didn’t have a passport. Neither a copy, nor the receipt from the South Korean embassy where it was in for a visa application, would do. PASSPORT? PASSPORT? PASSPORT? No amount of explanation would work.

This reached a slightly ridiculous impasse whereby they were ringing and hammering on the room door demanding she leave. A visit to a hostel where she had been staying for the past few days garnered a similar response. Long story short, the passport was briefly retrieved from the embassy, delivered via an expensive and quick taxi ride to the new hostel, she was registered for a week’s stay and it was covertly spirited back from whence it came. Sorted, with a few nights paid for twice.

In defence of the hostels, I think it’s because of a faintly Orwellian automatic visa registration system which requires a scan of the actual passport and presumably Trouble from the authorities if they fail to do so. An interesting Catch 22 though and nearly at a point whereby she would have been homeless for the week!

Since Sarah had to hang around for an extra week I decided to stay for a few days too, in order to see more of the city. My earlier optimism about smog was entirely unfounded as I found out that they had simply turned the factories off for a few days in order to generate blue skies for a big military parade. As such, the sky was quite simply opaque and both of us were seriously struggling on the first day back. Coincidentally I found out that Beijing had also hit the news for an enormous traffic jam caused by cars returning to the city after National Day… Glad not to have been stuck in that!

Booking into a hostel for a whole three nights in a row was both unprecedented and very welcome- It would be a First World Problem to suggest that travelling is hard work however going from place to place to place pretty much every day does start to get a bit wearing. This however led to a massively lazy first day whereby we failed to make the Water Cube waterpark by its admission limit of 3.30pm. Nonetheless, it was refreshing and a change to stay in a hostel in the thick of a major Hutong and to see some actual life.

The next day we failed again to catch the opening time of Mao’s mausoleum but did make it to the waterpark in good time. Hooray! Water Cube was originally built for the aquatic events of the Beijing Olympics and since then has been re-purposed into an aquatic complex with the Olympic-size pool and also a fun waterpark “for kids”. Yeah right! The Olympic Park it’s set in is quite impressive, with the huge Bird’s Nest stadium another feature.

The waterpark didn’t quite live up to expectations, possibly because it was a weekday and fairly empty only about half of the flumes were open- Fair on one sense but when you’ve paid the scandalous £23 to get in… Luckily the flumes that were open were absolutely terrifying, including one that you go down on a 2-4 person raft. I maintain that half of the reason for my terror was going down backwards but I will admit that I was genuinely convinced we were going to drown- To the extent that I cramped my leg trying to hold on so tightly. Yeah alright, I’m a wuss. It wasn’t terribly warm either, I think they depend on there being LOADS OF PEOPLE in there most of the time. #China

The next day passed rather more peacefully with a wander round the Forbidden City and some parks.


Of course, in China you’re never more than a few metres from some sort of odd statue or figure. Travelling with children is so tiring, they always want a photo! I mean, you’ve got to really, haven’t you?!?


So, that was Beijing again. I’m glad I spent a few more days there, although unfortunately I felt my boredom threshold looming so opted to leave Sarah waiting for her passport and head down the coast via Shanghai and Xiamen to meet up again in Hong Kong. I was determined to do this bit by train as I won’t be able to leave HK by land.

Bristol to Hong Kong by train… I’m happy with that! 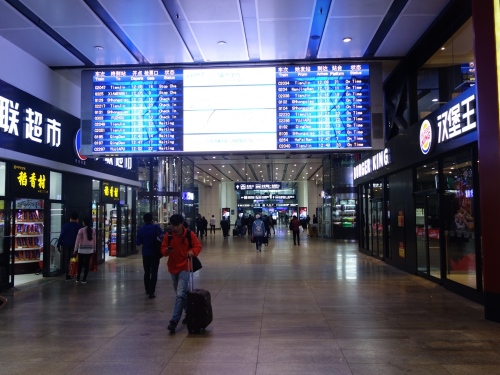 Shanghai is exactly what you’d expect from China’s mega-city. Far more “Western” than Beijing, it’s home to a large expat community, and you can actually get by pretty well speaking English. Huge skyscrapers dominate the centre and along with the river provide a spectacular backdrop. It was nice to see dozens of barges still plying the river too, a working port as well as a major financial centre. 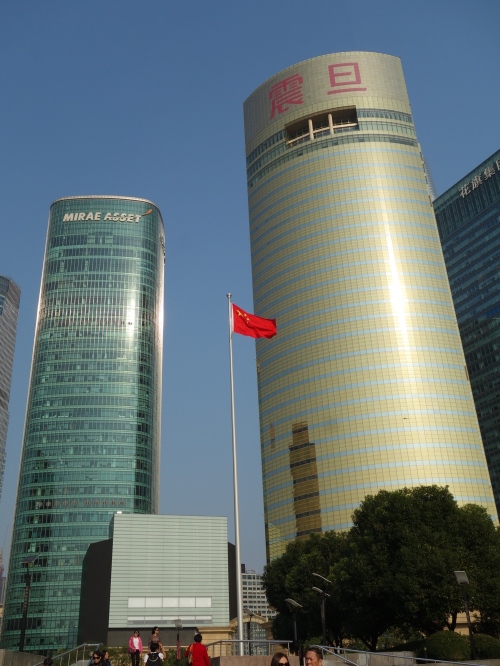 Shanghai marked my first couchsurfing experience. One of the friends I’d met in North Korea had a spare sofa for the night in Zhongshan Park, a nice area of the city and within easy reach of Hongquiao Station. Ideal! I’d never heard of couchsurfing.com before, but it’s an ace website whereby people simply offer you a bed for the night. In return you offer your own house up for other couchsurfers. Simple, but a great way to meet people, save money and get the local perspective on places.

I didn’t really do much in Shanghai… I did enjoy my first draught pint of BrewDog since leaving though, which was far more exciting than it should have been! A couple of days of pleasant wandering and some decent beers in the evening meant it was by no means a wasted trip.

Back on the high-speed train in the morning, a long journey down to Xiamen Island on the coast and my second, highly successful couchsurfing experience. Thanks Yanott and Ethan!

Xiamen is a pleasant, liveable university town and somewhere I could probably imagine living. Rents are low and the pay for English teaching fairly decent. Sure, not many people speak English but minor issues… It is technically an island but very firmly connected to the mainland by road and rail bridges. The traffic is naturally appalling as, despite it being a small place it is also in China and therefore packed with people!

Ethan kindly took me on a tour of the city and university and we also enjoyed an amazing hot dog from the German expat’s bar in the centre. It was also my first sight of lots of graffiti in China, it’s quite surprising that this seems to be allowed to remain when everywhere else is so clean and controlled.

So then finally, it was back on the train for a 4 hour trip to Shenzhen North station. This is the town directly above Hong Kong and the one which marked my exit from China. I could have flown fairly cheaply from Xiamen but really wanted to finish in style. 6 stops on the Shenzhen metro gets you to the Chinese border checkpoint and then a walk along the inside corridor to cross the river and you’re in.

So, there it is. I’m in Hong Kong, and I got here all by land (and a short ferry). Just shy of 10,000 overland miles on trains. Unfortunately circumstances now dictate there needs to be a bit of flying, and in any case I’d only be able to get to Singapore by train before taking to the air.

So, here I am, back in beloved Hong Kong 4 years after my last visit. I have 6 days ahead of me in a lovely hotel before there’s a sad farewell, and a flight to Hanoi.