The last time I was in Hong Kong was 2010, on a trip which also included Viet Nam. At the time I really, really loved the place and, even back then, easily envisaged living there. This certainly hasn’t changed, it’s still one of my favourite places in the world and my desire to live there has grown stronger. However, last visit I really remember myself thinking how Chinese it was.

Having now visited Mainland China I have completely revised this opinion. Travelling straight from the UK it’s not something you’d notice, but the subtle references back to the UK are both numerous and very obvious. Hong Kong is an interesting place, which retains a very distinct identity of its own despite the previous colonial rule and the current drive for greater control by China.

I spent my entire visit this time being slightly perplexed as to what direction the traffic would be coming from. They drive on the left, something I hadn’t really considered in the past. There are also double yellow lines, another subtle throwback that simply hadn’t occurred last time. And more importantly, English is the second language so compared to China I could count my language failures on one finger.

In any case, I was still travelling with Sarah and we’d made a joint decision to do it properly with a nice hotel. This is something I’d definitely advocate, HK is an expensive place anyhow and the cheapest accommodation options don’t come in much less than £40 a night in any case. AirBNB was unsuccessful due to at least 2 hosts trying to gouge the price due to an ‘event’ on, which was clearly bollocks. I reported both, I hope AirBNB takes action as it was really disappointing to see this nonsense going on.

£40 a night might get you a shoebox sized room in Chungking Mansions, a festering pit of human despair and lax fire safety off Nathan Road. I’m glad my early reticence about staying there (well actually downright refusal) paid off. We visited that road one day and popped into the ground floor bazaar area to experience numerous offers of hooky watches and hash, and mild sexual harassment of Sarah within the space of about 2 minutes. It also smelt strongly of arse throughout.

So, the budget was smashed upwards to around £80 a night, which garnered a deluxe room for 2 at the Causeway Bay Best Western Hotel. Naturally, being HK the room was still decidedly bijou but nonetheless very pleasant. My plaintive requests for a room on a high floor were granted giving us a spectacular 33rd floor view of the city.

This is wholeheartedly the way to do Hong Kong. The decent Internet deal included breakfast throughout our stay which, being a buffet affair was fully exploited every day, negating the need for lunch.

The deal-making rooftop “jacuzzi” turned out to actually just be a small unheated pool however it was nonetheless pleasant after a long journey to dunk oneself into. And faintly amusing as a series of disgruntled guests came up to investigate the “Jacuzzi” and learnt its true nature. But hey, view was great… Apart from the grinning buffoon in the way, obvs. 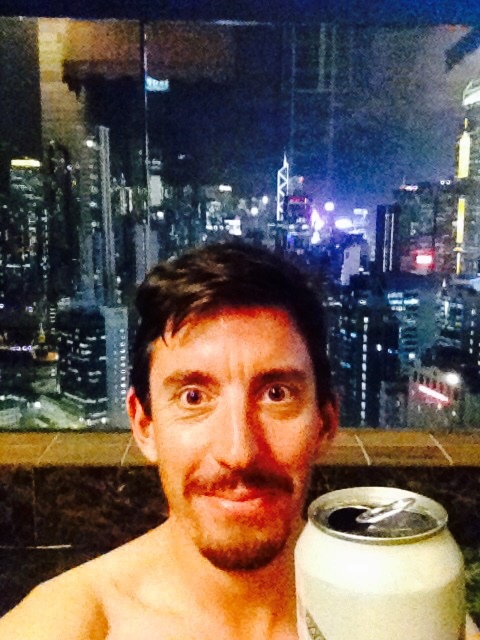 So, 6 days passed and it felt like home. Albeit a much warmer home. I think both of us were feeling relief at being ‘planted’ in one place for a full week so most of the sightseeing opportunities happened at a leisurely pace.

On the first night, Sarah wasn’t due to get in until late so I went to see the horseracing at Happy Valley. Last time I went I had seen a weekend meeting at Sha Tin, the newer course, however there’s something about the setting of HV that is just unique and very special.

I think it’s a big event on the expat social scene as the place was packed. Quite a culture shock to be surrounded by Westerners when for the last few months it’s just been me and Asia for company. So much so in fact that I knocked it on the head quite early and returned to the relative peace of the hotel. Cumulative weariness after a couple of sleepless nights under mosquito attack in Xiamen and then a long journey hadn’t helped!

Much of the joy of Hong Kong is just wandering around and seeing what you find. I was quite happy to revisit the sights of my last visit, and to see a few I hadn’t stumbled across. The first was the aviary in Hong Kong Park, a really pleasant place to stroll round in the heart of the city and with very close access to all sorts of exotic birds. 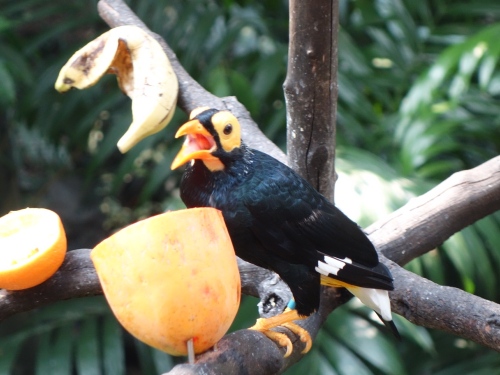 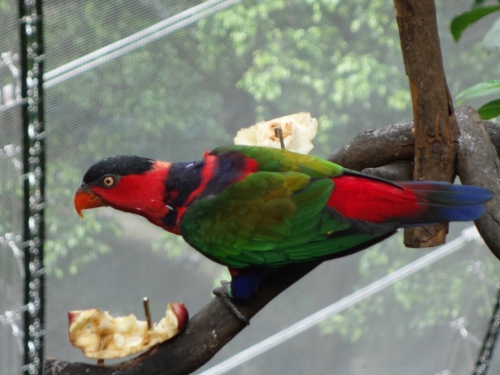 From there, we were almost at the Peak Tram so went up to have a look. The view from the top is excellent, although to get the ‘premium’ view you need to pay for entrance to the new building. Instead, since it was a very cloudy day anyway, we went around the peak walks and were treated to some amazing night views on the way down (sunset here comes alarmingly quickly and early at the moment!)

We were also keen to see some more of the outlying islands so set off on the second day for Lamma Island, a small place only 20mins away from the centre by ferry. There are well marked walking routes around the whole island so we set off to see it all. A really lovely, peaceful place with a rugged coastline:

In the evening we met some local friend-of-friend expats living on Lamma for some drinks at the island bar. It was really interesting and inspiring to hear their tales of leaving the UK and of the relative ease of life in Hong Kong. Rents on Lamma are significantly cheaper than the main island which seems bonkers considering it’s only 20mins away. It was also really interesting to hear about the active Dragon Boating scene on the islands. So my gig rowing experience might come in handy after all!

The next few days continued in a similar but pleasant manner, general wandering around Hong Kong Island and Kowloon, eating and drinking and generally just taking a break from ‘serious’ travelling. Interesting to reflect on the great journey I’ve shared with Sarah since Russia and how much ‘roughing it’ we had done in Mongolia to get here!


Well, day turns to night and it wouldn’t be a true HK experience without hitting the bars, surely? First we viewed the light and music show from the promenade opposite Hong Kong Island. This wasn’t quite as spectacular as I remember from last time, although still worth watching. There are sometimes fireworks too…

…onwards then to Lan Kwai Fong, HK’s ‘notorious’ drinking area. A very good laugh, 3 or 4 pedestrianised streets filled with bars and merriment. I’d love to have told you more about the night, but, as Sarah recounted with forensic detail and barely-concealed glee the next morning I was very…very… Drunk. I blame her for feeding me shots. Damn non-drinkers!

In any case, the next day involved an epic hangover so I/we decided to visit the nearby Cat Cafe. Housed in the 4th floor of an office building it’s an interesting place. It did feel slightly exploitative, the cats weren’t overly happy with all of the humans grabbing them so I did my best to satisfy my fluff quota whilst behaving rather more calmly than some of the other guests who clearly hadn’t seen or interacted with cats before!

Some of my favourite residents:

There was a wall of photographs which was quite amusing in its juxtaposition of ecstatic-looking humans and near-suicidal cats. The proprietor was a nice chap and clearly cared well for the cats but shared most of his guests’ complete inability to behave in a cat-friendly manner… 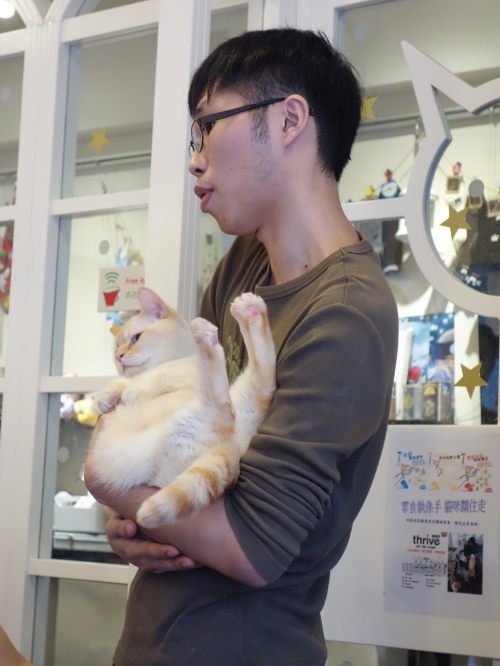 The cat cafe was definitely worth doing, I had wanted to visit one since visiting Japan many years ago. I do value more now the intense scrutiny on detail and cat welfare shown by new UK startups such as Lady Dinah’s because I don’t really think cats are predisposed to enjoy being mauled by strangers for 10 hours of the day.

Back on normal form the next day we decided to visit Lantau, the bigger of the outlying islands near HK. Ferries take you there in half an hour from central, with a great view of the skyline on the way. 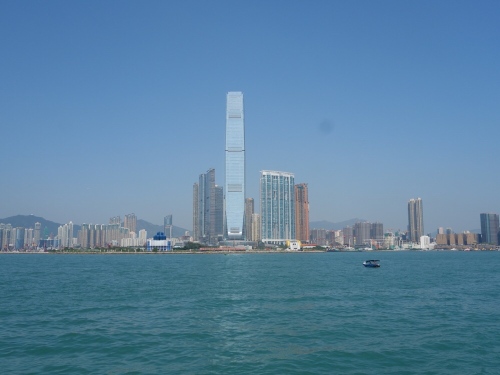 In fact, ferries are hue best bargain in HK for casual touring. The Star Ferry is a HK institution which takes visitors and residents between Kowloon and HK Island for the princely sum of 20p or thereabouts. There really is no reason to take the overpriced boat trips.

Arriving at Lantau we set off around the island to Discovery Bay. The beaches on Lantau are beautiful and clean, and its general relaxed vibe firmly places it into the Places Sam Could Live box.

A stiff walk up the hill brings you to the pagoda at the top, and some great views across the bay. 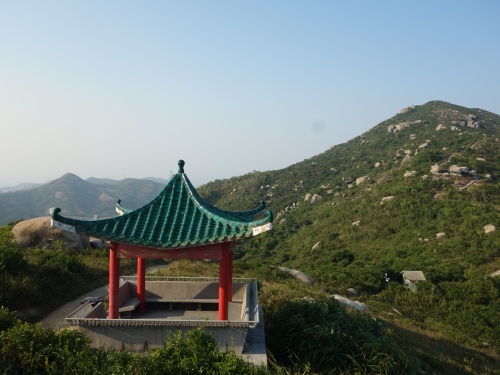 From there it’s all downhill, more or less, to Discovery Bay. The guides vary wildly about how long this walk takes, so it ended in a slight stomp as the light began to fade and the end was rather firmly not in sight.

However, made it we did, and settled down in the village centre to enjoy a final meal on Hong Kong. DB seems like a big expatriate enclave, although not really my scene, it seems to be where the well off enjoy sophisticated drinks whilst air kissing a lot and discussing the education of Jocasta and Hugo who are running around the tables. Great restaurants though, and just about affordable with a BOGOF at the Mexican place!

And then, unfortunately, our time in Hong Kong and our time as an unstoppable travelling duo had to come to an end. Sarah setting off to the airport with her ludicrous snail-like cargo:

And me following on later in the day, for a bargain but somewhat uncomfortable Jetstar Pacific flight to Hanoi. At £60 including a hold bag you can’t really grumble.

A number of farewells, then. To the lovely Sarah, to my somewhat marmite beard, to most of my hair due to an over-enthusiastic Hong Kong barber. And to a taste of the West. Back to Asia proper now…