Onwards from Makarora, and the weather really started picking up. There is a climatic phenomenon centred around the huge mountain range running down South Island’s spine that means that, invariably, the West coast is wetter, and also that the weather just over the mountains in Wanaka will generally be its polar opposite.

I was unprepared for how many amazing vistas would present themselves to me on the short journey to Wanaka, winding through the lakes. Every corner of the twisting road appeared to show another stunning blue lake view. Naturally the sun helped, but I’m glad there were so many places to stop and take photographs as I could scarcely believe what I was seeing… Eyes version 2.0 unready for the size and splendour of the scenery. I’d like to state for the record that all these photographs are mine and haven’t been tinkered with at all, other than to slightly adjust the light levels. NZ’s colours are like life in HD.


So, after an extended wander around Hawea, I headed back into Wanaka town itself, having pulled in briefly to the National Park information centre on the outskirts to suss out the outdoor activities available.


Wanaka town is a great place, with a good cafe culture and relaxed feel. There are, obviously, about 7000 souvenir shops however also loads of outdoor outfitters, trendy bars, decent restaurants… Everyone seems on the same chilled wavelength. It’s no tourist ghetto though, the car park of the local supermarket is filled with huge ‘Utes” with dog cages in the back and the Post Office has a steady stream of locals sorting out their admin.

My own personal admin was finding somewhere to charge my USB battery pack, which was achieved with a lengthy coffee at a local friendly cafe. Much as I’d hoped to hire a kayak for a mooch around that afternoon sadly the conditions were too windy, with whitecaps forming on the lake. Therefore I settled for grabbing lunch from the supermarket and generally mooching around for what was left of the afternoon, before heading slightly out of Wanaka itself to Arthur’s Town camping ground, a basic site a few KMs away run by the Department of Conservation and costing 7 bucks for the night including water and toilets. It’s a pretty scenic spot next to a fast-flowing river. I saw some locals jumping from the road bridge in. The height and the battles they had with the current just to reach the side convinced me NOT to give it a try.

Whilst free of sandflies, I was plagued in an altogether more charming fashion by a family of ducks who wanted a bit of the venison sausage action I had cooking… Luckily I found a use for the leftover bread I had by covertly throwing it very hard towards a late entrant camper van who had parked in my view of the river… Mwahaha! Bye ducks.

The next day I did manage my kayaking. Sadly the weather was fairly rubbish in the morning however, since it showed little sign of improving any time soon I thought I’d give it a shot. The guy at the kayak hire place was slightly surprised I wanted to go out. Crazy Englanders.

2 hours hire got me around the lake and out to Ruby Island, a small place which was devastated by fire in recent years however restored and replanted with the help of the local Rotary club. I’m sure on a dry, clear day it’s a lovely place however with driving rain and the wind picking up I didn’t linger too long.

The row back was somewhat interesting due to the wind whipping up waves along the coast that I needed to head alongside. Still, all bankable exercise, and after drying off and changing in the van I was good to go again. Firstly for a bit of final life admin at the post office and then towards Rob Roy glacier.

The road towards the glacier is sealed for a good 10km past town, but the final 40km are all on dirt. Again, a good driving challenge when the van gets a bit drifty in the looser-packed corners. Naturally extra hazards were also provided in the form of cows and sheep from the ranches along the way.


Ignoring the dire warnings which seemed to have put off 90% of the other tourists heading up, by the looks of all the cars abandoned in the car park beside the sign, I continued. The mighty Hiace laughs in the face of such risk aversity.

Due to the heavy rainfall overnight and well into the afternoon the fords were pretty high, but doable. On the third however I wasn’t completely sure. I decided to take an adult approach (There’s always a first) and, as I’ve seen on a few Bear Grylls type shows, and opted to walk the ford to determine its depth. Shoes and socks off, I rapidly sunk up above my knees. Ah. With a couple of humungous rocks in the middle too. And loads of soft sand. Eek… Not van-able, I reckoned.

Luckily my choice was confirmed as a big bear of a New Zealander approached the ford in his off-road spec ute, and declared that you’d be mad to try it.

So, on foot it is then. The rain during the earlier part of the day had seriously delayed me setting off for the walk, so I anxiously calculated the remaining daylight and came to the conclusion that, even with the extra 6km to reach the trailhead, I’d be fine. Probably.

So, I set off and turned right, taking the suspension bridge over the raging torrent. Reassuringly I met some sturdy New Zealand lasses making their way down who confirmed that it was perfectly doable in 3 hours… Leaving SPARE DAYLIGHT! to get back to the van, hopefully.

The path up is fairly mellow compared to the Franz Josef glacier scramble, but not without its hazards. Some sections are a little precarious, more so given that many feet below is the meltwater river crashing through the valley. True risk-taking in the outdoors is not taking safe bungee jumps or skydives where the risks are minimal, it’s actually just walking with the knowledge that a significant slip off the path and you’d basically perish in the river pretty quickly. Eeek.

I also initially waved off this sign’s sage advice:

Not until you round the bend and realise that they are actually not talking about a few small boulders, rather the London bus-sized behemoth overhanging the path:

And so, upwards. I overtook a somewhat frosty group of French tourists on the later stages, it was reassuring that someone would be  behind me if I got eaten by bears, wolves or something. I’m not convinced they would have cared significantly though! Towards the end of the path I passed one of the most scenic privies that I’ve seen so far: 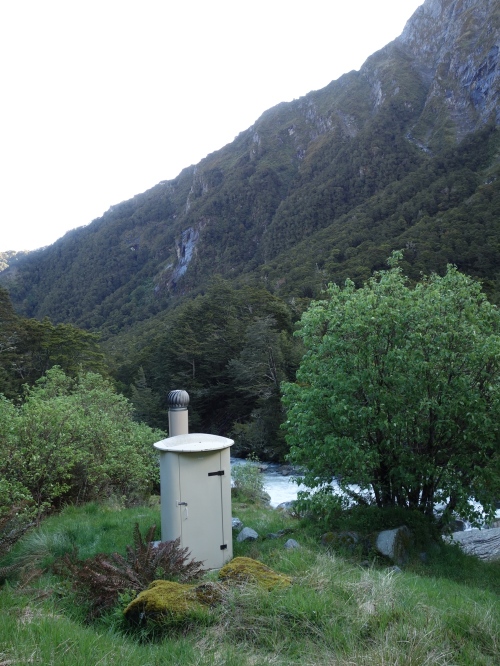 …and my only thought was “Jeez, some poor bugger has had to carry that up here!”. We passed an amazing waterfall and reached the end of the path before the glacier. As wanky as it sounds, I did have to loudly exclaim ‘wow’ on a number of occasions. Big Country does that to you.

The thing I love about glaciers is that you feel them before you see them- Every corner on this path I detected a temperature drop, particularly towards the higher stages of the path. You really know it’s going to be a big slab of ice when it manages to refrigerate the warm NZ evening from miles away. Absolutely fantastic.

I had wanted to get a bit closer to the glacier, and there is an apparent informal path going beyond the top viewing area, however due to the rain the first river crossing was completely impassable, so I headed back down. Discretion/valour and all that.

There are a number of other routes in the area- If I’d have turned left at the first junction this would have taken me towards one of several mountain huts. However, it’s rarely long in any one direction before it all gets very serious and you need to crack out the crampons. Not for me, yet!

So, having seen the glacier and managed to tire every inch of my body to exhaustion with the combined hiking/kayaking effort, I headed back to the van via some amazing late evening views of the valley and its inhabitants. 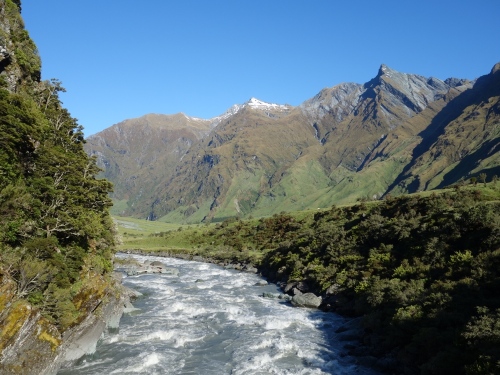 My choice of abandoning the van prior to the final two river crossings proved to be a sensible one, as I returned I noticed new debris in the form of several plastic sump guards deposited, casualties of the previous driver’s gung ho approach!

I set off on the 50km back to Wanaka at a decent pace- It’s a bloody long way on a dirt road- Until I encountered yet more herds of cows determined to mo(ooo)ve in the most random fashion in front of the van rendering fast progress unwise. Interestingly as I reached the end of the dirt section it had been coned off in the opposite direction as they’d decided to close it! A little risk averse perhaps as the water had dropped massively by the evening.

There are a couple of DOC campsites on the way back into Wanaka however these ones were for ‘proper’ motorhomes only, and since I only had a tin of beans/sausages to my name I decided to return to Arthur’s Town campground via Wanaka for supplies.

A pasta meal recommended for 4, all to myself, then a remarkably sound night of sleep, prior to a day when I really needed to crack on and put some distance in towards Christchurch… A good day.