Finally it was time to start heading back up South Island in order to return the kindly donated van, and possibly more crucially, for a few cheeky cervezas before leaving Christchurch. I’d been strongly advised to visit Mount Cook village, despite it being a 120km detour from the main road. Hey, I had time, so why not?

Out of Wanaka, the road winds slowly up the Clutha river, back out into the wide expansive NZ countryside, and over the impressive Lindis Pass. Colourful flowers line the road in a riot of colour, and the landscape moves from vineyards and lush countryside to more arid, high plains scenery. 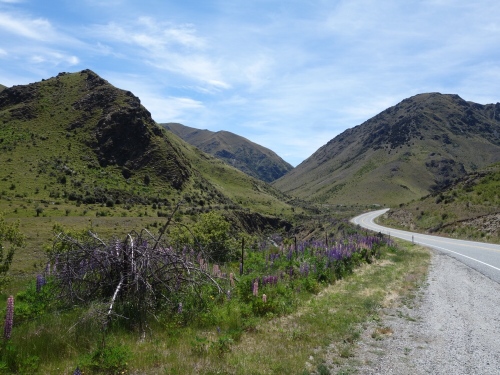 And so, through small random towns, I came towards Lakes Tekapo and Pukaki, and the turning for Mount Cook village. I loved this area of the island, it had a real “Wild West” feel with the kind of towns you’d expect to see in parts of rural America, rustic diners, friendly folks and some interesting-sounding local events. Omarama was one of my favourites- Possibly partly because of the intense relief as I finally reached the town and saw the open petrol station. My decision to crack on from Arthur’s Town without backtracking to Wanaka to fill up was a slightly bold one, I was unprepared for how long and, crucially, uninhabited the road was to Omarama and therefore arrived there on diesel fumes!


Pretty soon, the imposing figure of Mt Cook/Aoraki again hove into view over the expansive plains. It was strange to be approaching the same mountain from the other side, seeing such different views. And then, the turn-off to Mount Cook village appeared, and the mountain became a constant, glorious sight over the intense blue of Lake Pukaki.

And so, the road continued ever closer… Towards Mount Cook village, and the fantastic Department of Conservation visitor centre, containing a museum of the history of mountaineering in the area, as well as mock-ups of mountain huts and more importantly weather and safety information regarding the area for the more serious mountaineers… 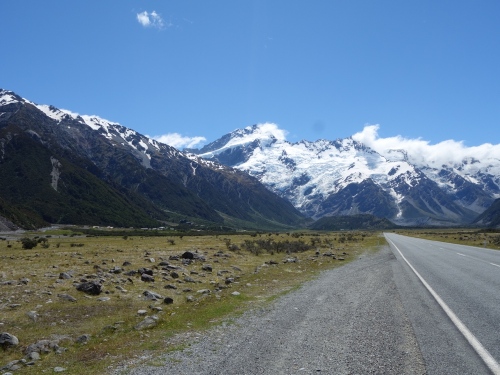 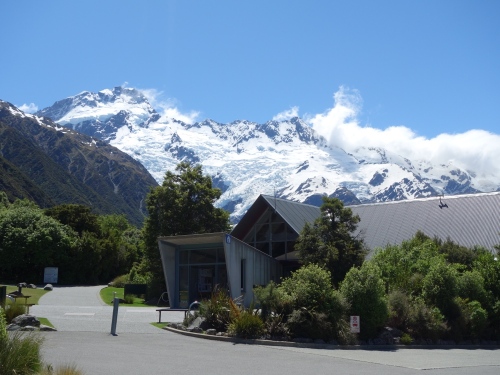 Mount Cook village is a definite ‘must see’ place if you’re passing by on the highway. It has a real alpine feel, with plenty of restaurants and accommodation to justify staying the night. There’s a YHA and dorm rooms too for the budgeteers. I couldn’t possibly have abandoned the van for a comfy bed at this stage though, it would have felt like betrayal!

The selection of walks from the village is fairly limited- There is no real middle ground between a stroll up to Hooker Lake or another low pass, and then a serious multi-day ascent of the mountain range. However, having picked the former (obvs) it was enjoyable enough… 3 hours there and back, returning to the car park which doubles as the DOC campground. Pretty easy though, a very well surfaced track all the way up.

The views at the end are definitely worth it, seeing the mountains over the lake and imagining the struggles over the years climbing on this range… Many lives have been lost here, and the DOC visitor centre contains some incredible rescue tales from the last 100 years or more.

So, back to the village, and I’d decided to treat myself to a meal out. Primarily because it was my last night camping out, but also because I thought that my body simply wouldn’t tolerate another dose of baked beans. I ate at the Old Mountaineer’s restaurant beside the DOC visitor centre, which boasts spectacular views of the mountains and a surprisingly reasonably-priced menu.

Suitably nourished, it was back to the van for the night. In terms of camping in the area, there is the DOC site at Mount Cook village and then a holiday park about 30km back down the road- That’s pretty much it. It’s an area where wilderness camping is not allowed, so those are your choices. The DOC site is pretty well equipped, with a large enclosed shelter/kitchen, toilets etc. There are apparently showers available at the visitor centre in the village but I didn’t find them. It’s about 10 bucks a night per person.

Be warned, this is not a site where you want to risk not paying (there’s the standard honesty box/receipt system). I saw rangers coming around the campground at 7pm checking receipts and also in the morning, when a ranger took 2 people back into the village- I assume to pay the on-the-spot fines for not paying!

And besides, why would you? It’s a reasonable cost for a spectacular site. I for one wasn’t really a fan of the holiday park experience other than for the showers, the DOC sites feel far more like you’re out in nature. Although, in a place like this, nature means ‘bloody freezing’, with howling winds all night. Preparation is key, and having already donned plenty of layers it was a comfy night.

Tomorrow: Back to Christchurch, some kilometres to cover…