Planning to fail, failing to plan…

We’d had a long think about places and in the end, planning for a January holiday means that you need to think far flung, for the chance of anywhere with sun, if of course sun is a desirable thing. By the time January actually arrived, after several of the wettest, darkest months I’ve ever known, it absolutely was.

Mark was bizarrely keen on Canada, and couldn’t really understand my reticence about going in the depths of the Canadian winter… when neither of us ski. That idea was reluctantly sacked off. By him. I was delighted not to be going somewhere freezing.

The planning therefore started in earnest. I’ve had for a bit of an obsession about using Jack’s Flight Club deals for a while now. I paid for the ‘premium’ membership last year and therefore have been absolutely bombarded with amazing deals to all sorts of obscure corners of the globe. However, apart from a few advance planning deals, the issue arises that when one has a ‘responsible’ job, generally it’s frowned upon to drop sticks immediately, or 2 weeks in advance, which most of these deals require you to do.

One such cracking deal looked extremely attractive at first… The Comoros Islands. 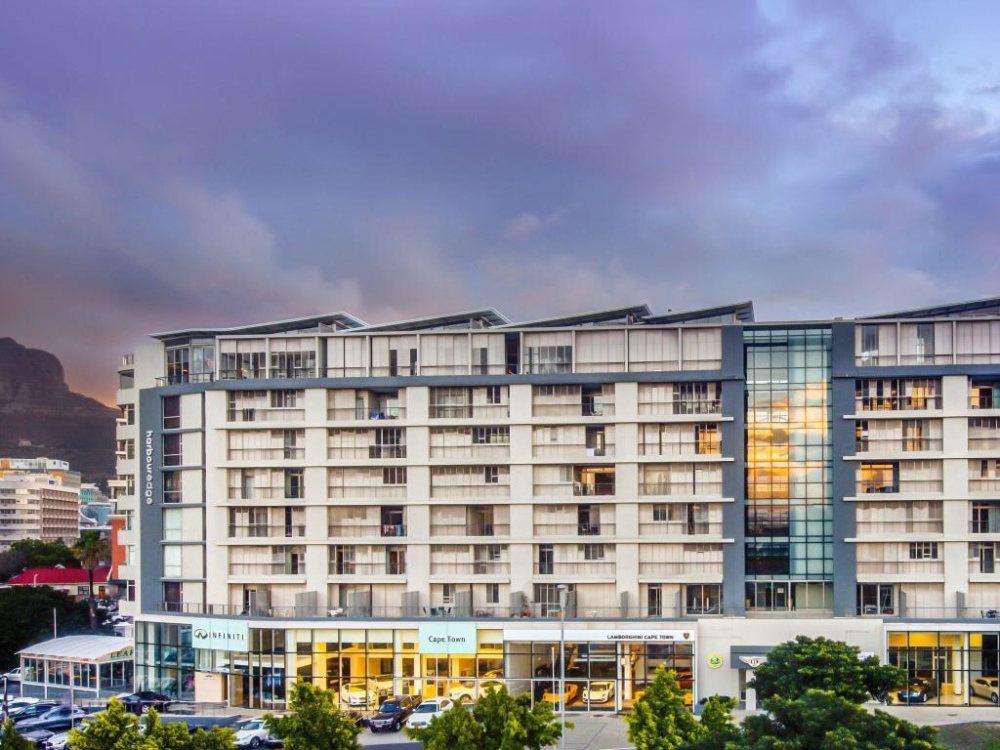 Oh how lovely, look at the dappled sunlight reflecting off the harbour onto the windows. We should make a booking immediately!
Exhibit A:
NOWHERE NEAR THE EDGE OF THE HARBOUR 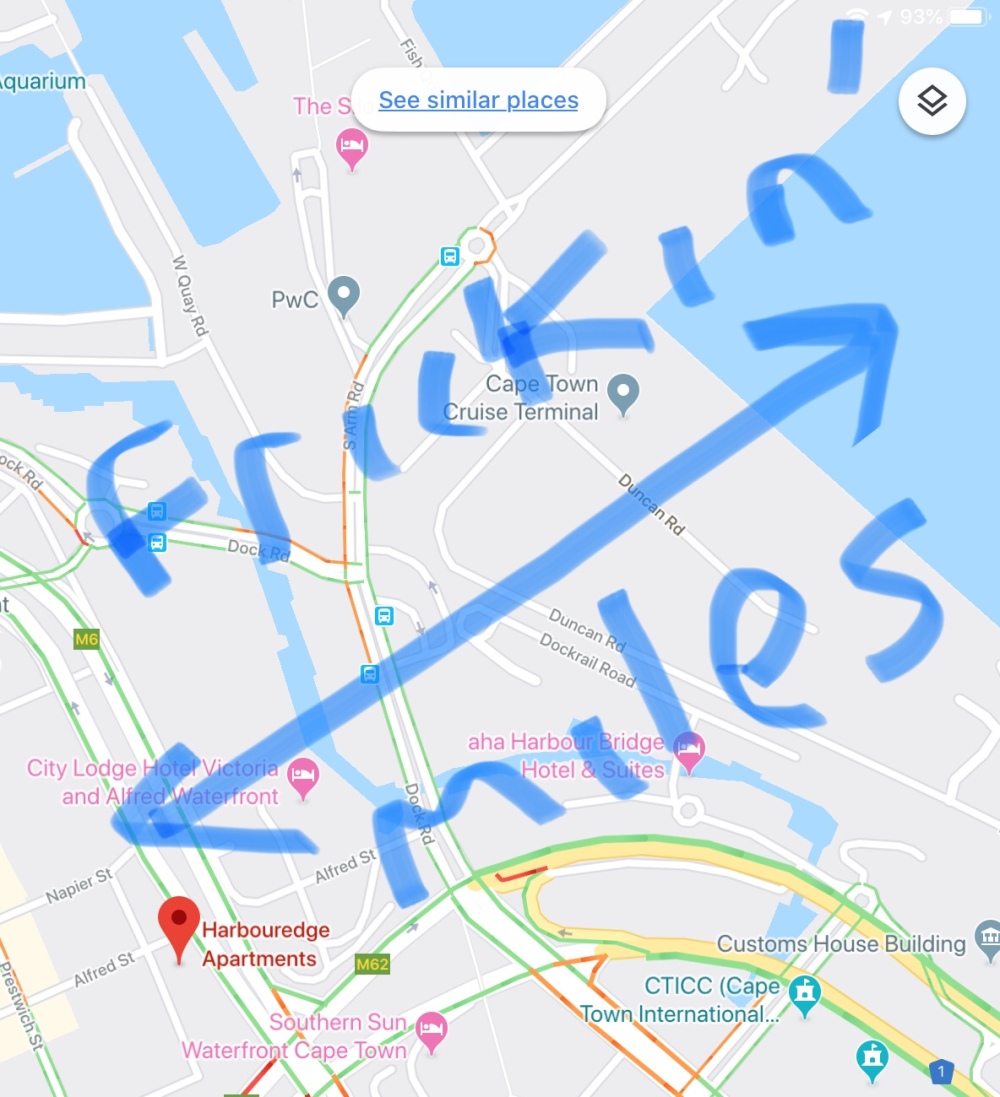 Exhibit B:
HARK AT THE ROAD! 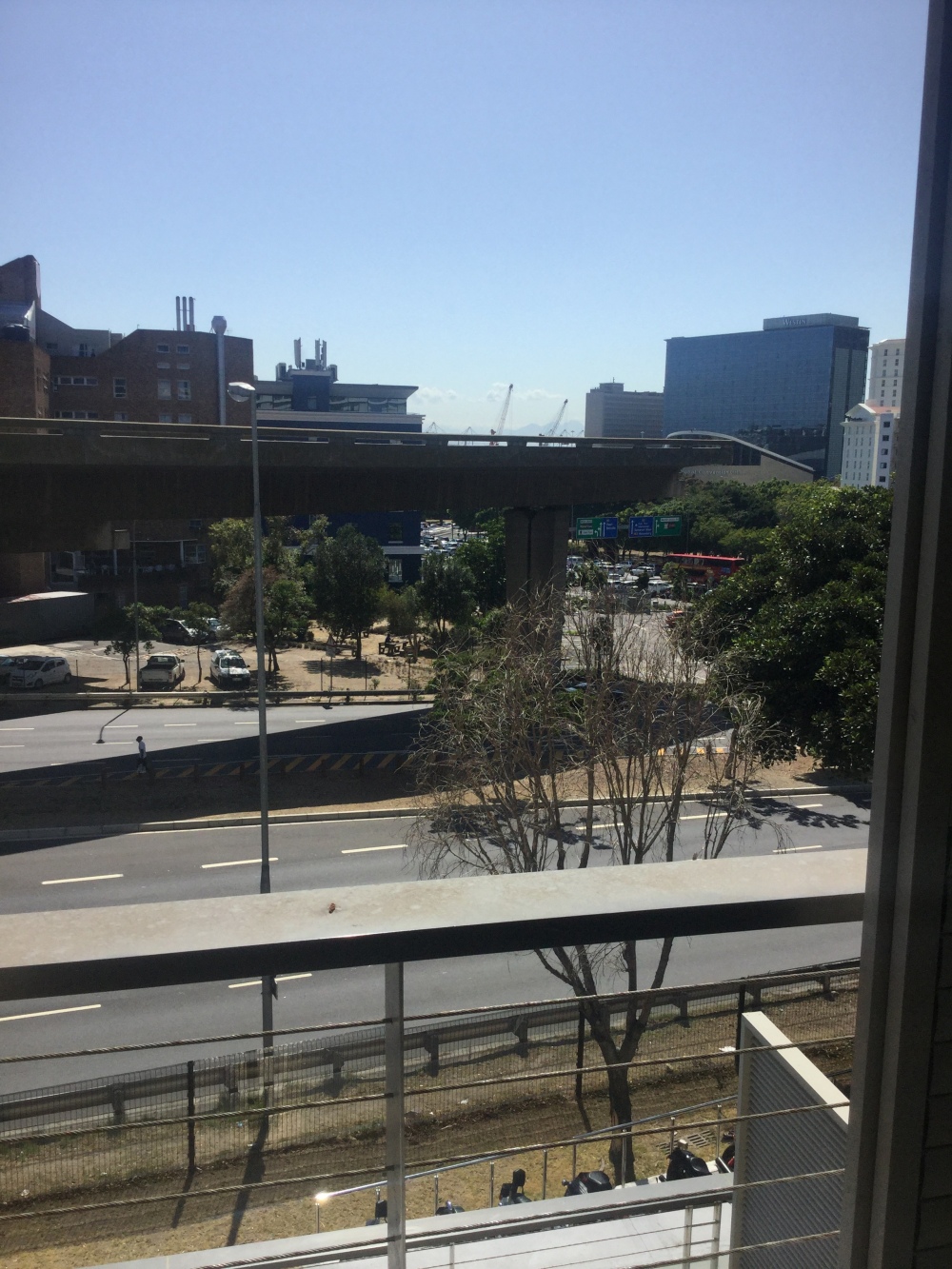 On the upside, it meant we got to see a piece of Cape Town history- The Foreshore Freeway bridge, which has stood un completed since construction ground to a halt in 1977. It’s just… there. Still nobody can decide what to do with it. A magnificent and lesser-spotted African White Elephant. A slightly unconventional landmark, but a landmark nonetheless. Apart from the somewhat intense view, it was otherwise quite a pleasant flat, and for £50 a night where it was, a comparative bargain.
We’d managed to cover quite a bit of ground on Day 1- Due to not being able to check in until 3pm, we had a considerable amount of time to kill, heading up to the very Miami Beach-like golden sand of Camps Bay, and the more local attraction of the Cape Quarter centre for a spot of lunch. 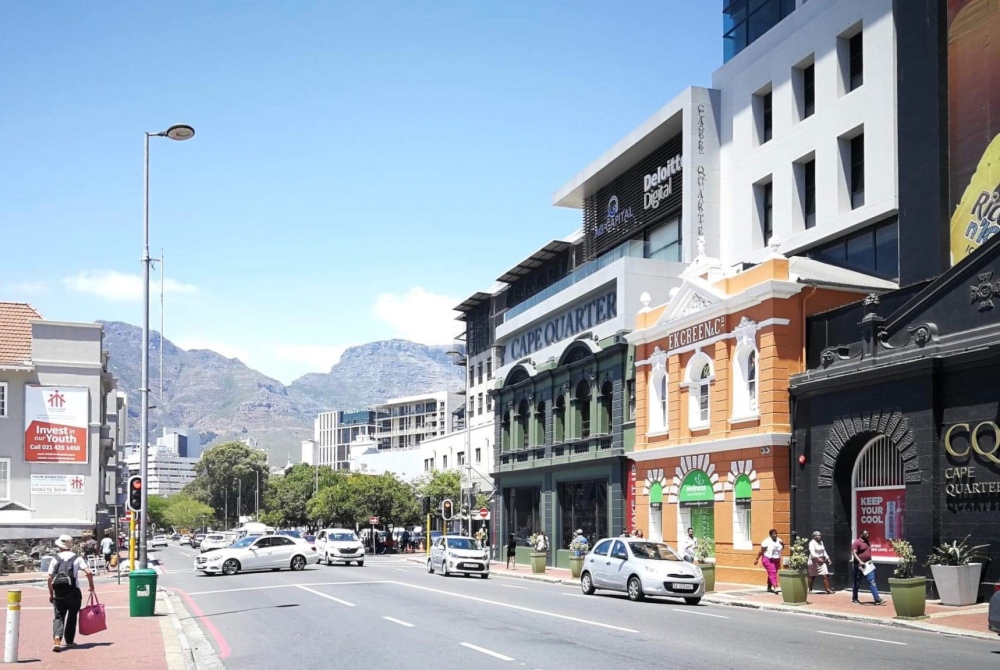 I formulated dinner from the local supermarket- Which led to an early observation of the fact that, on the whole, it’s about the same price to just go out and eat. Which is a welcome backup fact when you’re trying to be slightly good and have a self-catering kitchen to make you feel guilty!
Day 2 dawned, and Mark’s new lurgy was in full effect, so I took the opportunity to head out on my tod for what I really love doing on holiday- Just walking, checking things out and learning the area. And hopefully not getting murdered.
My attempt to get to the V and A waterfront was cut short quickly and unceremoniously when I realised that the only apparent way seemed to involve crossing 2 major motorways and then some seriously sketchy underpasses. Instead I headed up into De Waterkant to have a mooch. 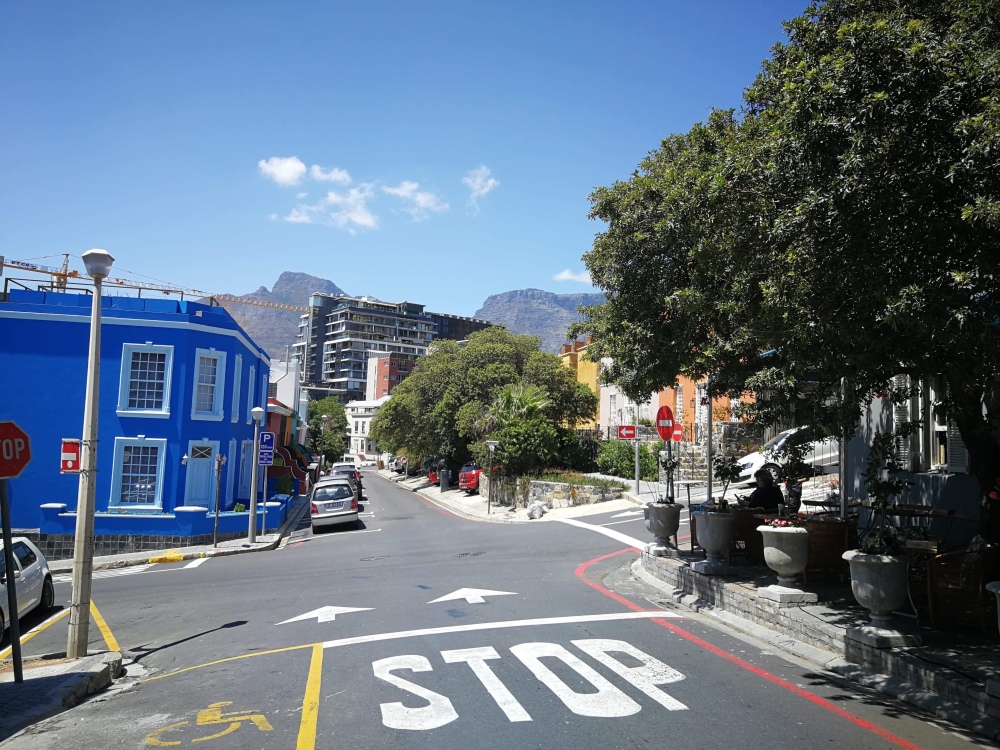 It’s an interesting area, with a strong commercial heart, loads of bars and various shopping experiences, however on the other side, as you head up towards the uninhabited/able steep hillside you find some really lovely old Cape architecture, relaxed bars and coffee shops and a generally upscale air.

Morning coffee was taken at a bar where I was served by a Congolese guy. It always fascinates me how the winds of economic pressure, opportunity and sheer fortune cause people to wash up on such far shores. I enjoyed a great chat with him about this, language and the world.

The next day we were set on activities. After a not-too-early start we headed down to Simon’s Town, and more pertinently, Boulders Beach, to get our holiday penguin quota. Strangely enough I was the more keen of us for this, damaged by a childhood love of Pingu. Noot noot! 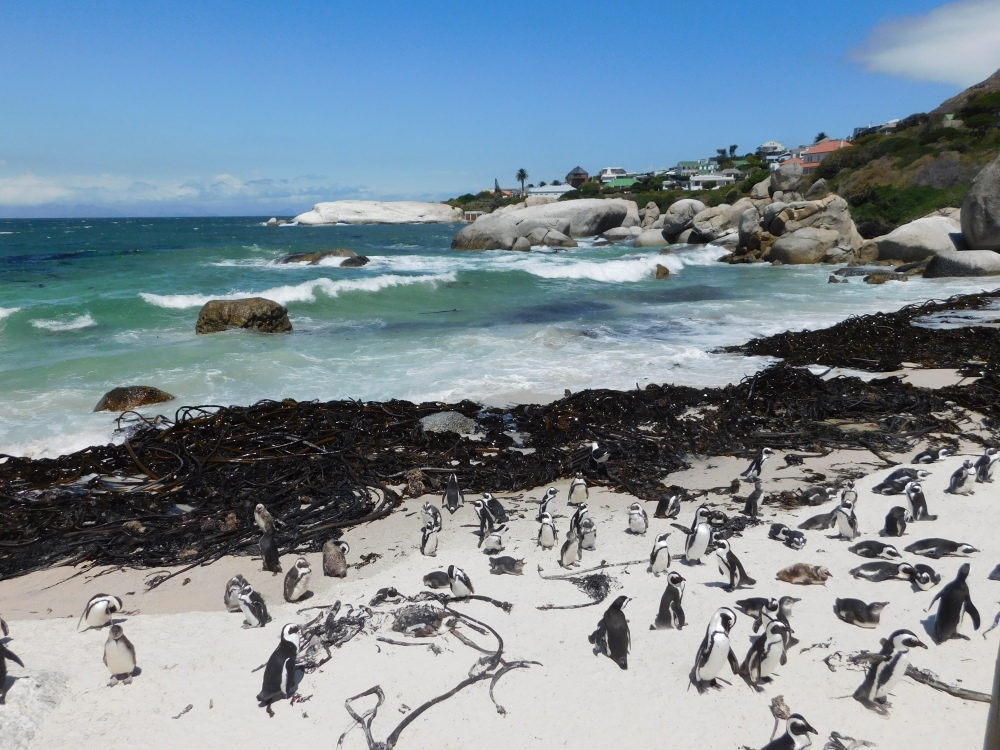 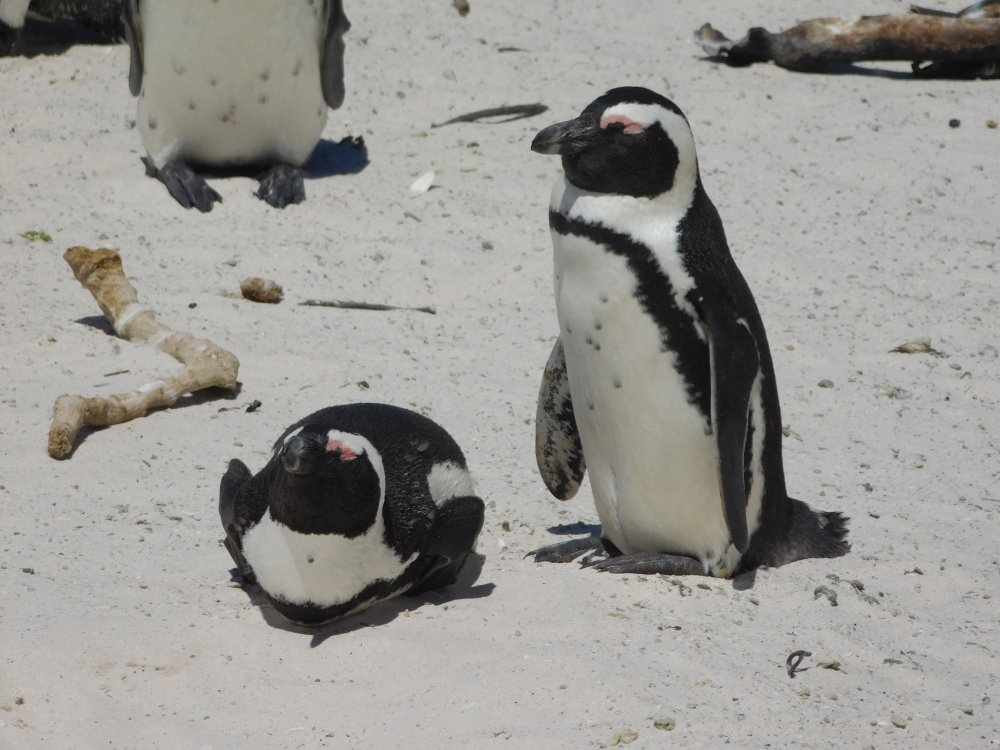 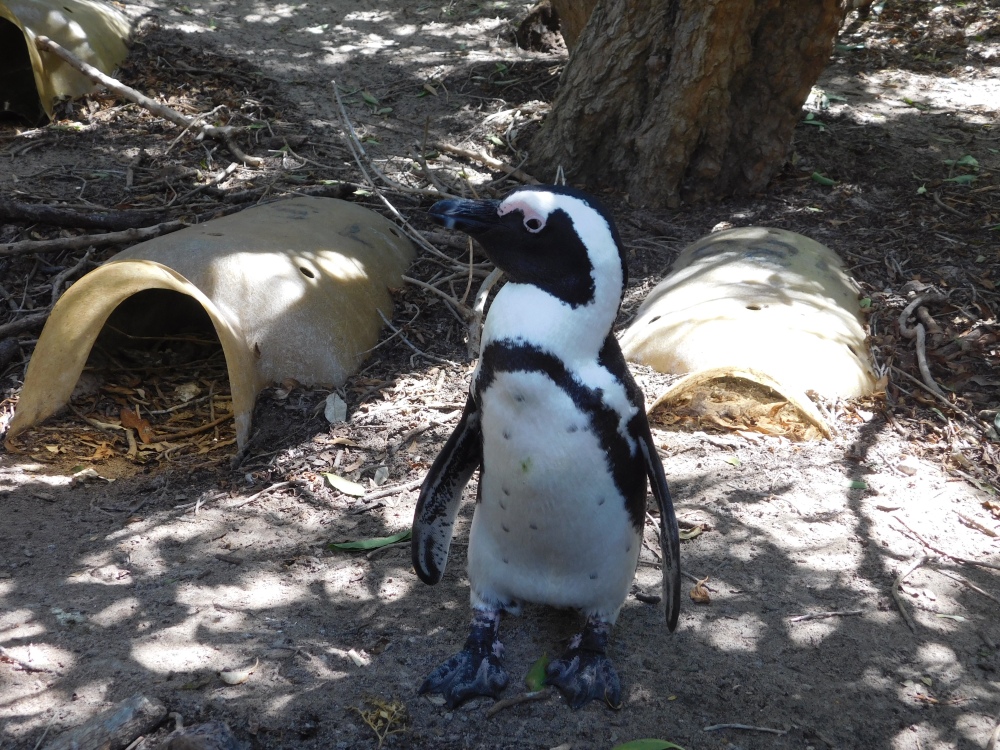 Boulders Beach is fantastic, and it’s well worth the visit (and the slightly chunky Park entrance fee) to see these little dudes going about their business. Sadly you’re restricted to boardwalks amongst the colony, with dire warnings about pecking, however Internet research suggests that actually, if you go onto the public beach next door (also requires payment of park fee) you can sneak closer to them…
It is, however, a bit of a one trick pony, so unless you were planning to spend the remainder of the day sunning yourself on the adjacent beach, it’s a matter of a couple of hours tops.

What at the time seemed like a historic steak lunch was taken at the Boulders Bay guesthouse’s breezy upper deck, and we pressed on southwards to Cape Point, the very end of Africa. This is within a National Park so again requires a relatively chunky park fee to be paid. It’s also a surprisingly long drive from Boulders, followed by a long drive in the park. 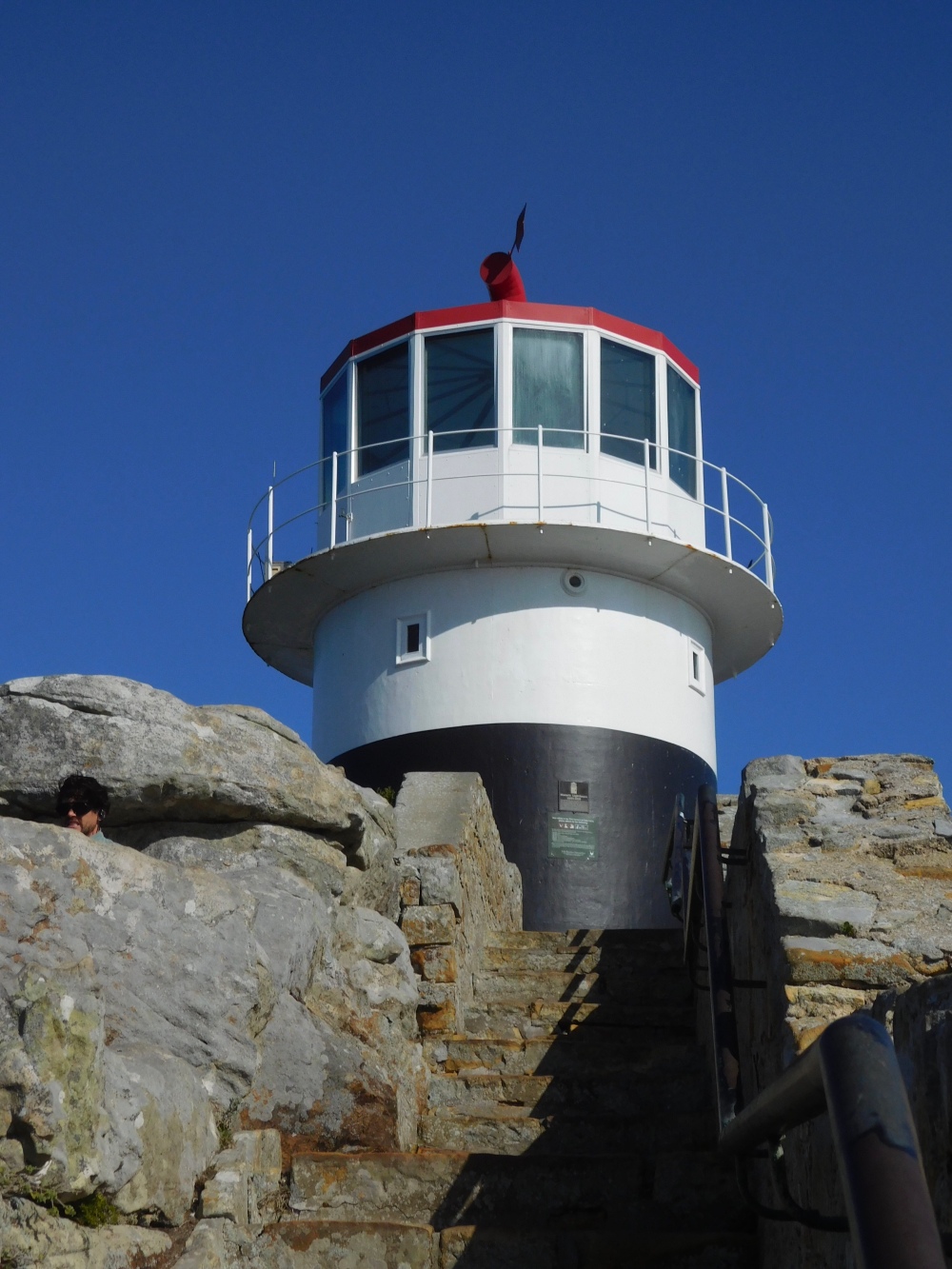 I found Cape Point lighthouse, and the nearby Cape of Good Hope, quite awe-inspiring. In front of you, thousands of miles of ocean, and then America. An incredible wind blowing in uninterrupted from the miles of ocean, and towering waves crashing against its base. You can just about make out the new lighthouse right at the tip- I’ve seen reports about a ridge path which goes right to the end, however I think it’s no longer in use, as I saw a small group of young Germans going no further than the old lighthouse- And they DEFINITELY would have gone further, if they could have. I definitely wouldn’t. With the combination of gale force winds and very big drops, I already had a touch of wobbly leg.

I used still-struggling Mark as my excuse to take the “Flying Dutchman” funicular up to the top. In my defence, I did walk back down though! 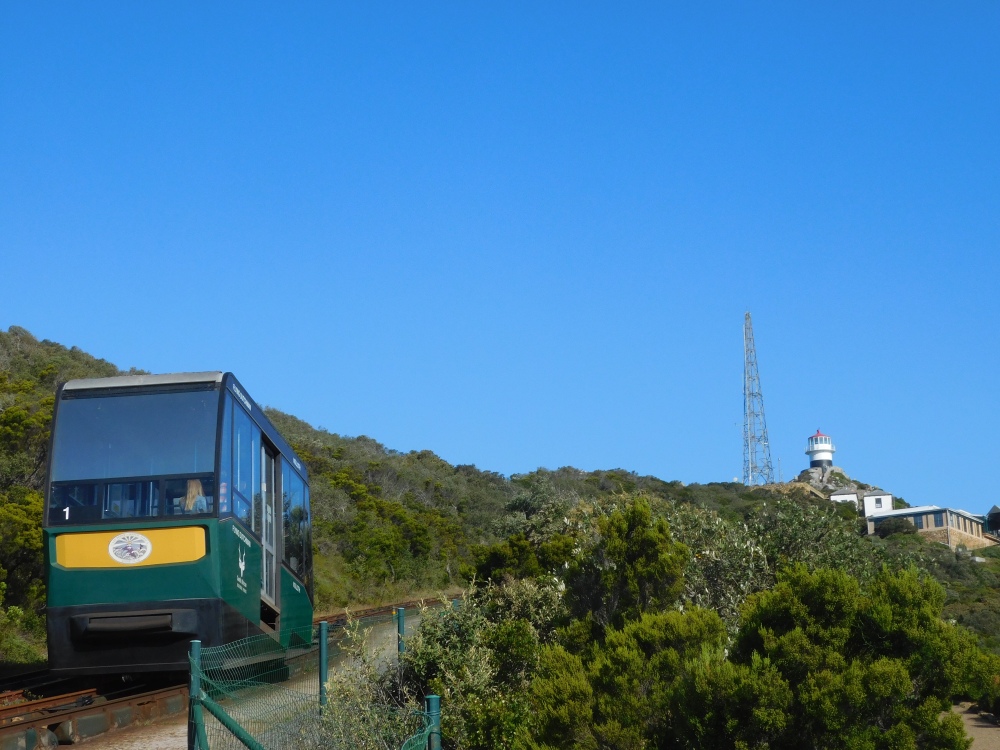 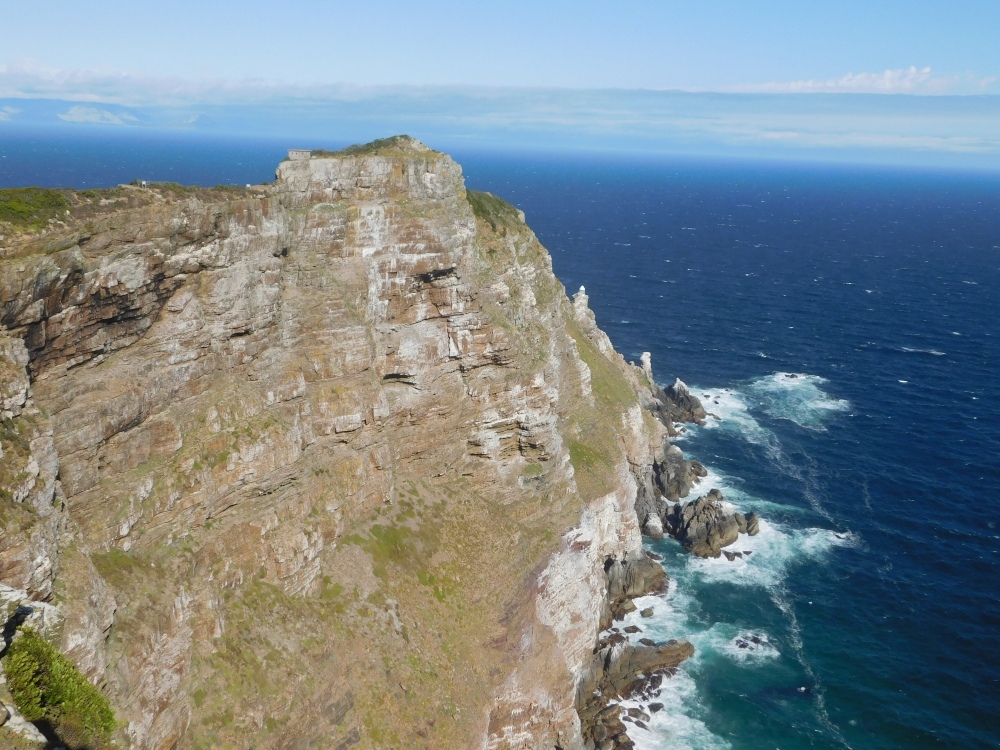 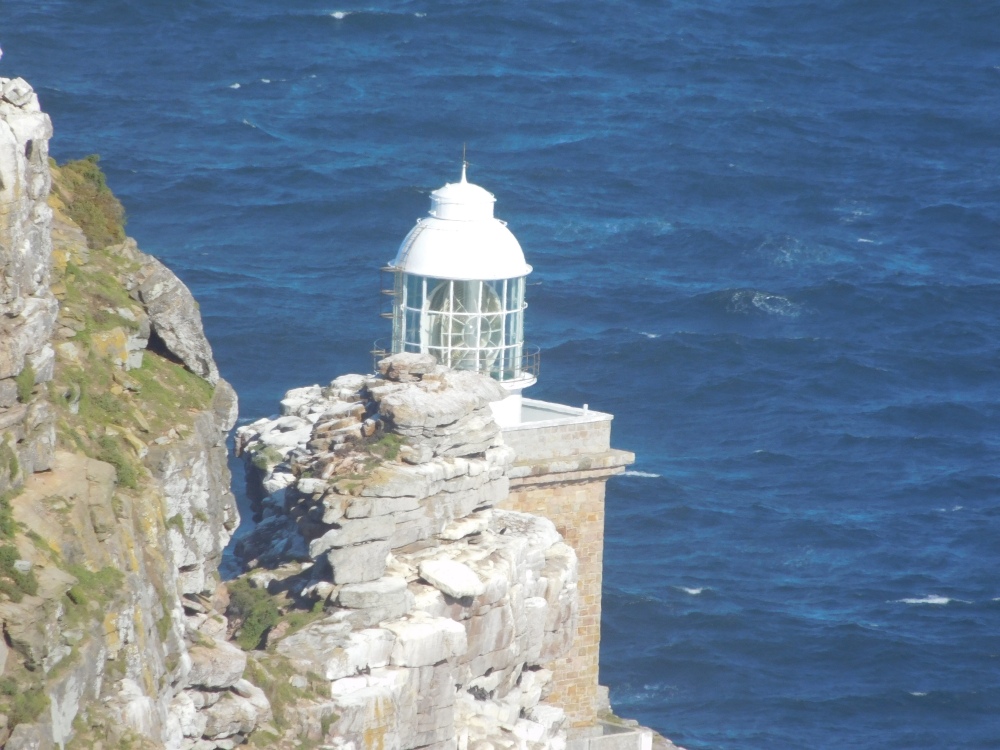 On the return journey we saw a huge gathering of kitesurfers, presumably pretty stoked about the howling wind, and amusingly a few wild ostrich, doing general ostrich-style stuff. 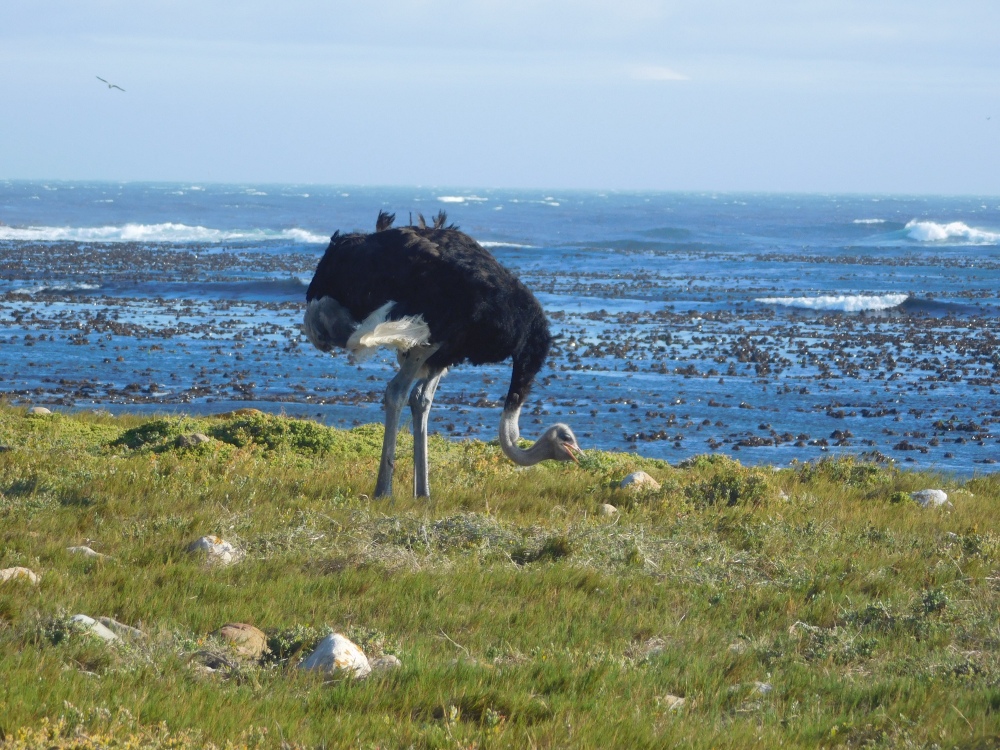 The drive home ended up being a fairly long one, since I have a thing about circular routes, and hate covering the same ground twice, so we had to drive up the Atlantic Ocean coast on the way back. Unfortunately, since roads aren’t always direct, this isn’t nearly as simple as it appeared, namely ‘Keep the sea on the left’, so we had a few wrong turns.

Happily though, this led us to one of our best wrong turns of the trip, Chapman’s Peak Drive. It’s a toll road, but worth every cent of the 50 Rand fee. Absolutely stunning, particularly in the luscious golden light of the evening. 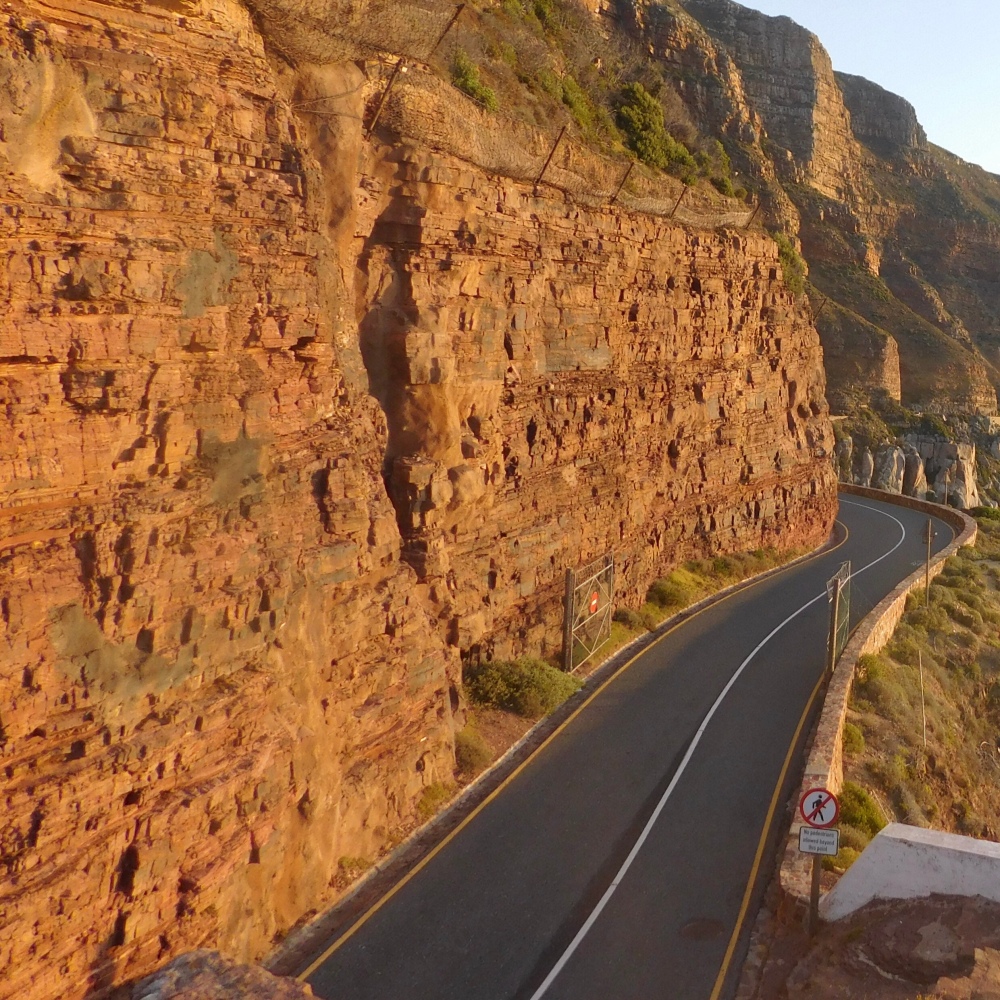 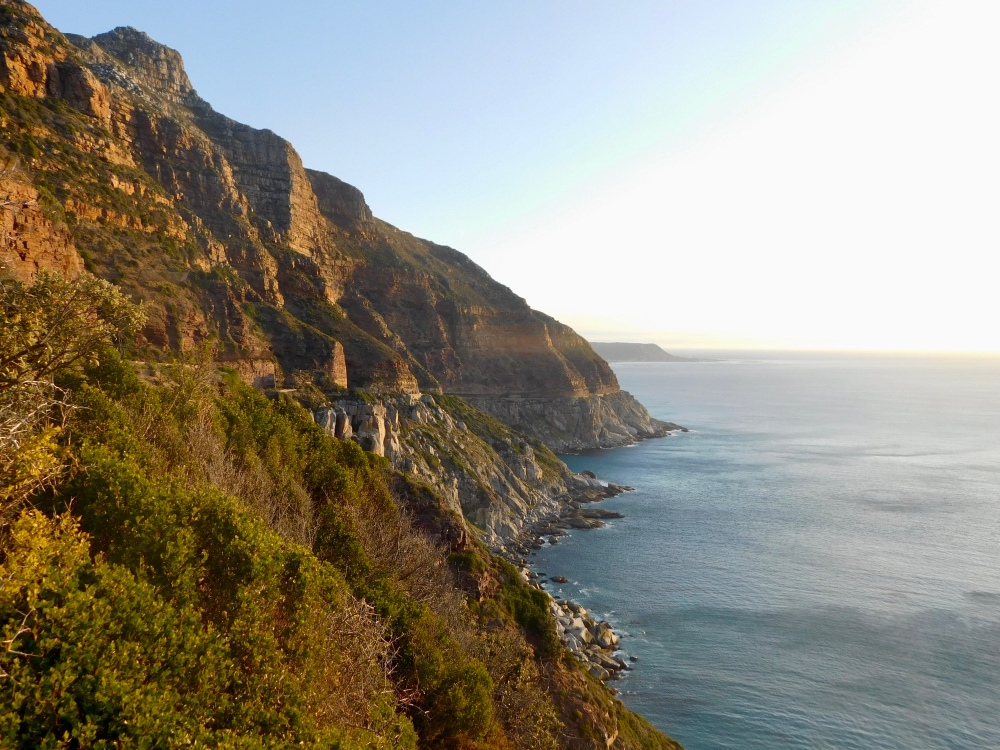 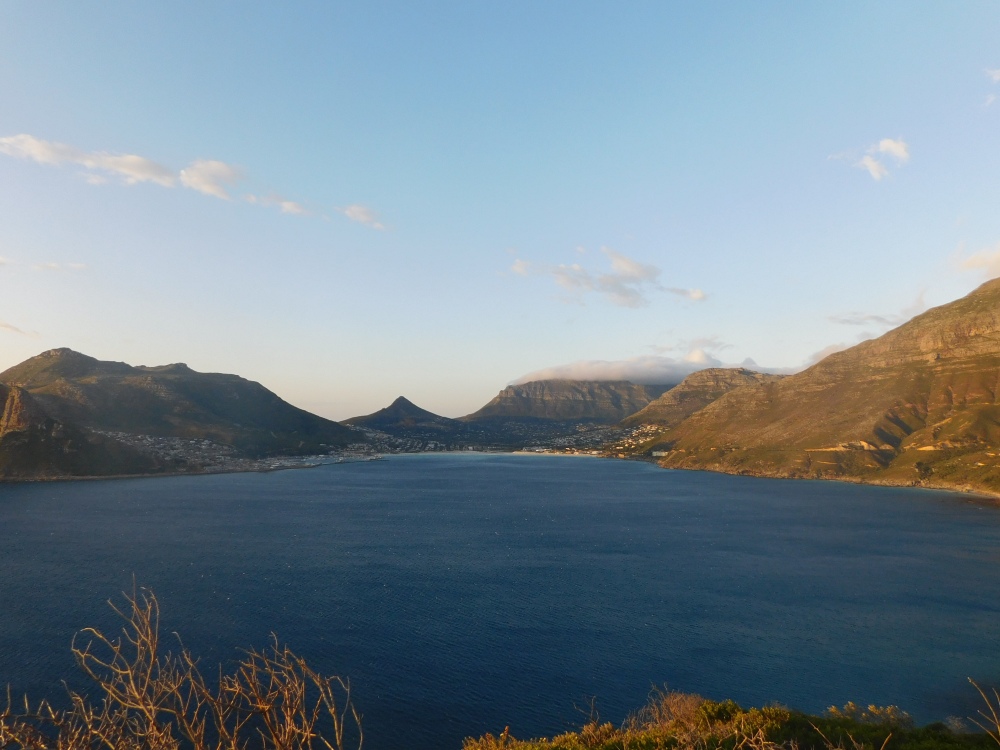 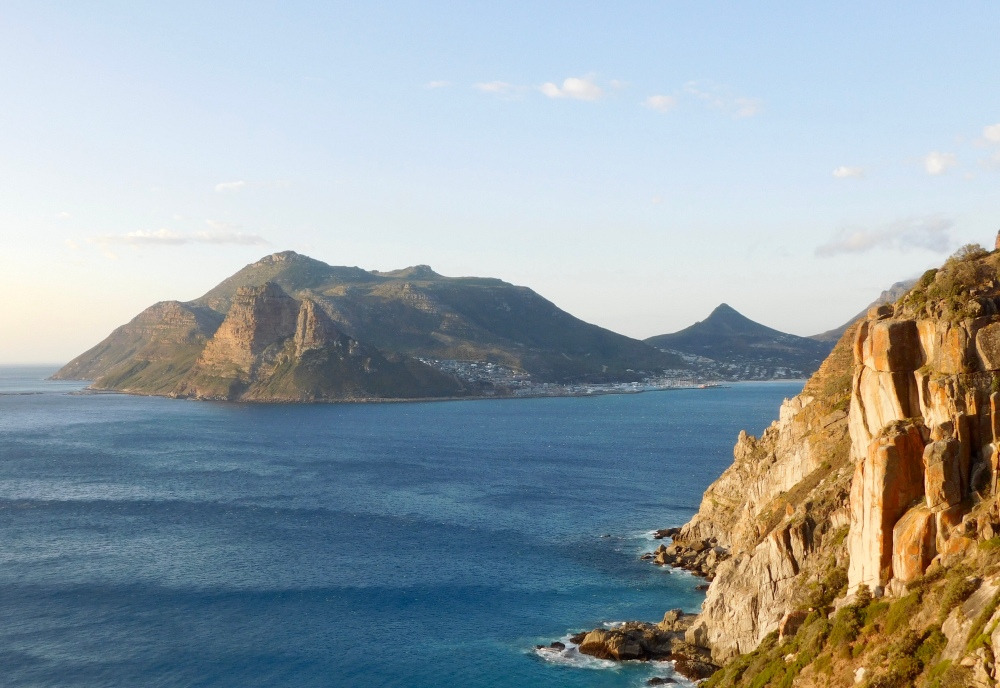 (You can, obviously climb Chapman’s Peak too, but the road’s the rather less strenuous way to enjoy the incredible vistas). Rolling back to our apartment was a delight, with dinner provided by Uber Eats- Not in any way local but astonishingly cheap.