In changing my blog editor I’ve come across a few nuggets from past travels. Since I hate deleting things, please enjoy this unfinished symphony from 2018…

My journey down from Tissa was relatively painless, as first experiences of bussing it in Sri Lanka go. Being on the bus at its origin is a good tactic, since it means that you’ve got a seat no matter how crushed it becomes. And, indeed, crushed it was. Passenger upon passenger gradually squashing in as the bus careened down the coast towards Tangalle.

My local SIM again proved its worth as I was able to track our progress towards Netolpitiya Junction, the most sensible juncture at which to alight the bus for Rekawa beach. As it was, it came upon us rather suddenly due to the enthusiastic driving and then slight unwillingness to stop of the young, insane bus pilot.

My hopes rose as the first tuktuk driver who approached me quoted a borderline reasonable price for the 6km to Rekawa village, and then accepted a decent lower offer. I warm to people far quicker when the first words out of their mouths are not a complete scam. Happy to pay a decent price, happy to pay a slight tourist tax but when they completely take the piss… No.

My destination? “Turtle Paradise” guesthouse, one of a slew of turtle-themed premises due to the unique selling point of Rekawa Beach, namely the beautiful sea turtles who come ashore at night to lay their eggs. 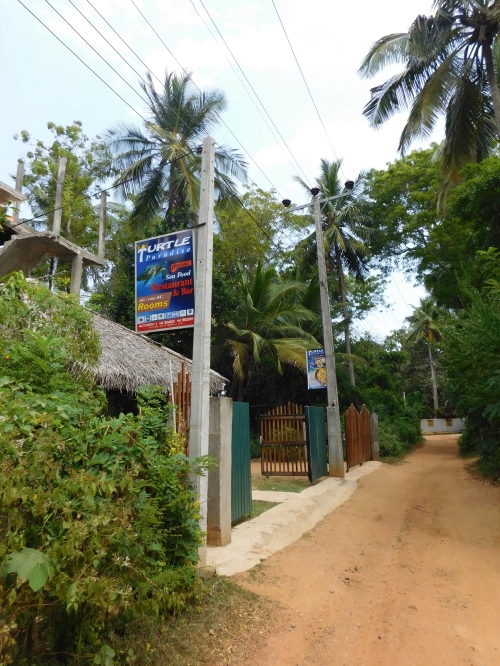 Despite appearances, this place actually isn’t a building site on the ground floor. They are in the process of extensive expansion to add 3 more floors to the guest house with rooms and a rooftop restaurant overlooking the peaceful lagoon behind the house. I was met by the bubbly/bonkers owner whose English was exceptionally limited. We did however establish that I did have a booking, and indeed I did have an available room, which was good.

I went for an afternoon wander around the surprisingly undeveloped local area, more of a village than a tourist resort, which was refreshing. Most definitely a place to get away from it all.

I immediately sacked off any ideas of an adventurous day, having woken up at 4am that morning for a safari. 7 hours of being bounced around in a safari truck followed by 2 hours of being thrown around in a bus had rather dented my enthusiasm for activities. So, early night it was. I decided to do Turtle Paradise the honour of eating there despite the menu being alarmingly ‘expensive’. Probably not by Western standards, but roughly double the prices I’d been paying up North. Gulp.

Their breakfast fruit plate at 1500LKR was a particularly laughable example. Seven quid? Luckily my local garlic prawns and potatoes were a more reasonable 1200LKR, and were delicious. Food win…

The next day was ripe for adventures. By the time my incredible breakfast had made it to the table, I had fully forgiven Turtle Paradise their somewhat enthusiastic food pricing. Coconut sambal, dhal, eggs, string hoppers, prawn curry and a fruit plate. Redemption through gluttony.

I set off down to Marrakolliya Beach along the sand. My fag packet Google Maps calculations had this as being around 2 miles away. A stretch, but I didn’t have anything else to do. Once again I gave in to the slightly destructive side of my personality which likes to analyse ‘here’s what I could have won’. The Lonely Beach resort was my original intended destination, much feted by Lonely Planet however sadly full on my dates. I wanted to sniff it out.

Rekawa beach is utterly splendid. I’ve never quite seen a beach like it. 2 miles of untouched coral sands and for the duration of my stay, virtually devoid of other people. It’s definitely not a place for an idle swim, there’s a very strong rip, some very strange currents and dumping surf, but the sand is safe enough. Until your feet start to burn.

It’s a strange thing actually, the heat in your feet slowly builds up until the sudden point where it passes the threshold into being unbearable, and you’d do anything to escape it. My initial sprint to the shade of the mangroves proved futile, so I had to unceremoniously dump myself on my arse to pop on flip flops. Luckily, nobody saw.

Lonely Beach Resort was in a predictably lovely situation, with the lazy lagoon waters sliding by and the odd guest languorously paddling on kayaks. Accommodation didn’t look glamorous although pretty standard for this area. I pondered the relative merits of early booking over a late lunch in their stilt restaurant over the lagoon. This end of the beach is definitely (slightly) more lively, which isn’t necessarily a bad thing. Food prices here were broadly on a level with Fawlty Towers up the beach.

This end is Marakolliya Beach, which has bounced back slightly quicker than some of the others in the area from the tsunami which devastated this area.

I set off back up the beach, seeing quite literally nobody on the 2 mile walk back. There’s a super-posh resort, Buckingham Place, overlooking Rekawa Beach which definitely wasn’t in my price range, although is worth a look. From there onwards I saw the odd tourist, but other than that you’re on your own. Definitely be careful with the swimming!

I find lack of activity whilst on holiday faintly disquieting, but in somewhere as beautiful as this I was rather starting to take to it. A lazy roundabout of leisurely breakfast, wandering, lunch from one of the few local places and then repeat in the afternoon.

My first night’s activity was pretty sorted- The main attraction of Rekawa is it’s Turtle Watch, a local co-operative which endeavours to monitor the local turtle population, find nests and move eggs to protected locations if deemed necessary. It’s also become a major tourist draw, hordes paying 5000SLR for the chance of seeing these huge creatures swimming into land and preparing their nests.

There are some murmurings on the internet about the whole thing being a bit of a scam, and to be honest, at the other end of the experience I’m none the wiser. Certainly, the project pulls in a huge amount of money every night- I counted around 50 all paying their entrance fee. They mainly seem to pay locals to guard the nests, some of whom are past egg thieves… Poacher turned gamekeeper.

After an introduction from a ranger, including lots of do’s and dont’s which were roundly ignored by many from that point on, we head out onto the sand. Nothing really kicks off until after 9pm. Spotters look for the telltale signs of nesting turtles coming in from sea, and once they are well on their way we are led over to the nest site.

This is a magical experience which needs to, well, be experienced rather than photographed. Sadly however this, and the ranger’s earlier advice about conduct on the beach, was roundly ignored by the huge crowd surrounding the first turtle coming in to lay. This is undoubtedly where Turtle Watch Rekawa falls down slightly- They simply don’t manage visitor numbers well, and hence the first turtle who came in to lay simply turned back around and returned to the sea. According to the guide this is simply something which happens…

… I’d attribute it rather more to the huge crowd of utter fuckwits who decided to take multiple flash photos on the dark beach, crowded well within the turtle’s vicinity and also into her path.

Thankfully however, sticking with it paid dividends. As the night wore on these muppets grew impatient and headed back to the village, leaving me and a much smaller group of people- Who were actually able to follow instructions. And so, several hours later in the dead of the night we were treated to the amazing sight of a huge green turtle slowly digging a hole, laying her clutch of shiny eggs and then methodically covering the hole.

In fact, tonight seemed like a particuarly successful one since we saw two more nests dug. Back to bed around 2am.

The next day was very much a rinse and repeat of the previous, except this time I walked down the coast. This part’s more rocky, and bears greater scars from the Tsunami. Rebuilding is starting, however unfortunately this seems to be in the mould of ‘large concrete luxury resorts” with the fishing communities pushed inland by foreign investors. At the moment however, it’s a lovely bit of coastline. Not much in the way of eating opportunities, however. After being chucked out of a beach bar which only catered to its slightly creepy guests I finally found a local restaurant slightly inland.

Sun Shine Cafe is a great little local place run by a woman whose husband perished in the tsunami. She’s soldiering on, building some new guest bungalows on her land, whilst looking wistfully at the slew of foreign investors hoovering up the beach plots. The reconstruction has only just begun due to the complexity of land titles here. Definitely not a change for the better.

She’d warned me that there would be a slight wait for food- Really not an issue since I didn’t have anywhere else to be, nor anything else to do, and with a cold beer in hand everything is fine. Only about 20 minutes later she began producing delicious plates of food from the the postage stamp sized kitchen. Really the only difficult thing was hitting the trail back.

For my final evening I fancied a relaxing activity, I’d seen on their website that they had kayaks so asked to use one for an hour or so myself around the lagoon… No, what this actually turned out to be was a major Fishing Trip with a cousin of the owner. I was almost at the point where I wished I hadn’t bothered, this wasn’t the chillout I had in mind… but actually great fun.

I thought I could wield a paddle reasonably successfully however not, it would seem, on a wobbly 2 person kayak. Still, an enjoyable evening passed and we retreated to Turtle Paradise to sample the fruits of the outing. Unfortunately, river prawns aren’t like sea ones, they are bleak, translucent little bags of mud. Thankfully everyone else seemed pretty hungry so I gracefully declined.

NOPE. River prawns aren’t like their sea cousins. Gritty, awful little nuggets. The next morning was similarly disappointing, as the owner had charged me for everything, about twice what it should have been. Including the boat trip oh, and the Tuk Tuk to the main road.